All it takes is a moment’s inattention.

The reason I am posting this is simply because it might help someone else out there.

Two days ago there was a break in the wet weather and Jim rang round seeing who was up for a ride. It turned out that four of us could go riding: Jim, Richie, Dordie and myself.

We decided to ride down Hugo Road, turn left onto the Merlin-Galice Road, follow that right to the end of Galice Road, very close to Junction 61 on Highway I-5, then turn left along Monument Drive, left again down past Grants Pass airport then back on to the Galice Road this time heading west back through Merlin to meet up with the foot of Hugo Road and then home.

All had gone very well for all four of us and it was a great ride and already we had some 14 miles under our belts.

Coming back into Merlin there is a railway track that crosses Galice Road. It has quite a wide shoulder to stop us cyclists having to mix it with the road traffic. But the tracks across that shoulder are not the smoothest of rides for a cyclist.

I did my best to cross the tracks square on but didn’t manage it. My front tyre slipped on the wet, metal rail and in that instant I lost my balance. Tried to recover but just a few yards later went down falling heavily on my left side and knocking myself out.

Luckily I was not riding on my own (Lesson Number One) and Jim and the others were quick to check me out. Jim said later that many drivers stopped including an off-duty medic who quickly summoned the ambulance.

But I was still out!

Dordie had the presence of mind to capture what was going on and it is her photographs that are in today’s post. 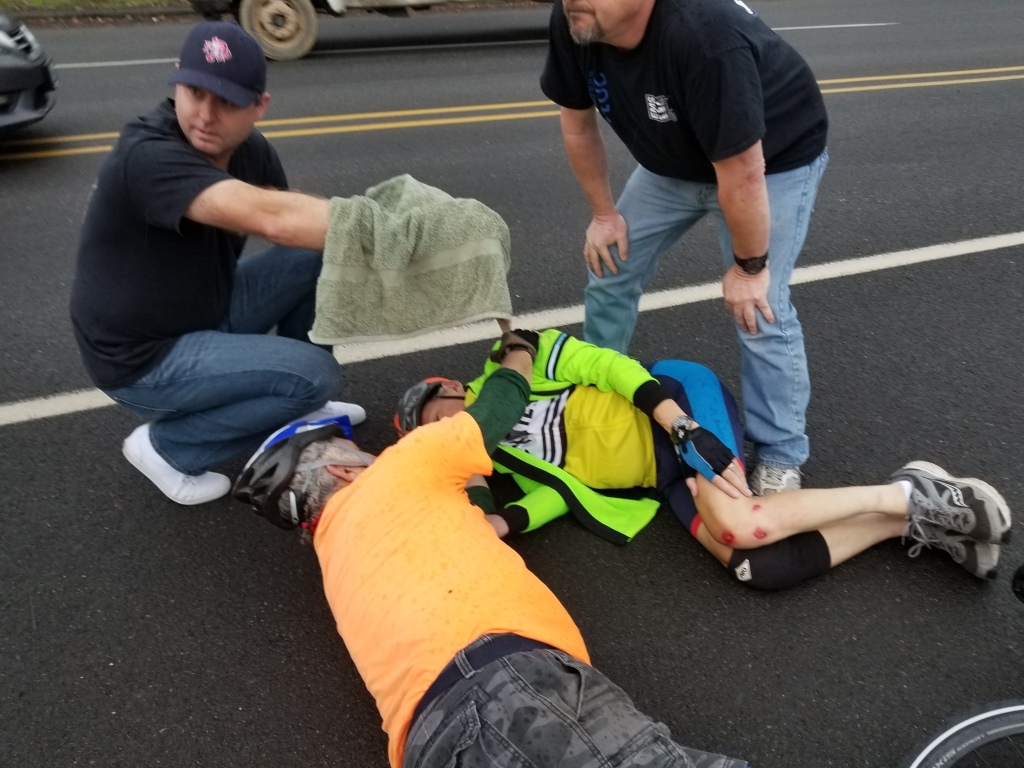 I continued being unconscious and later Jim said that I was out for eight minutes.

I was placed in a gurney with a neck brace because the medics were concerned that I might have damaged my neck. 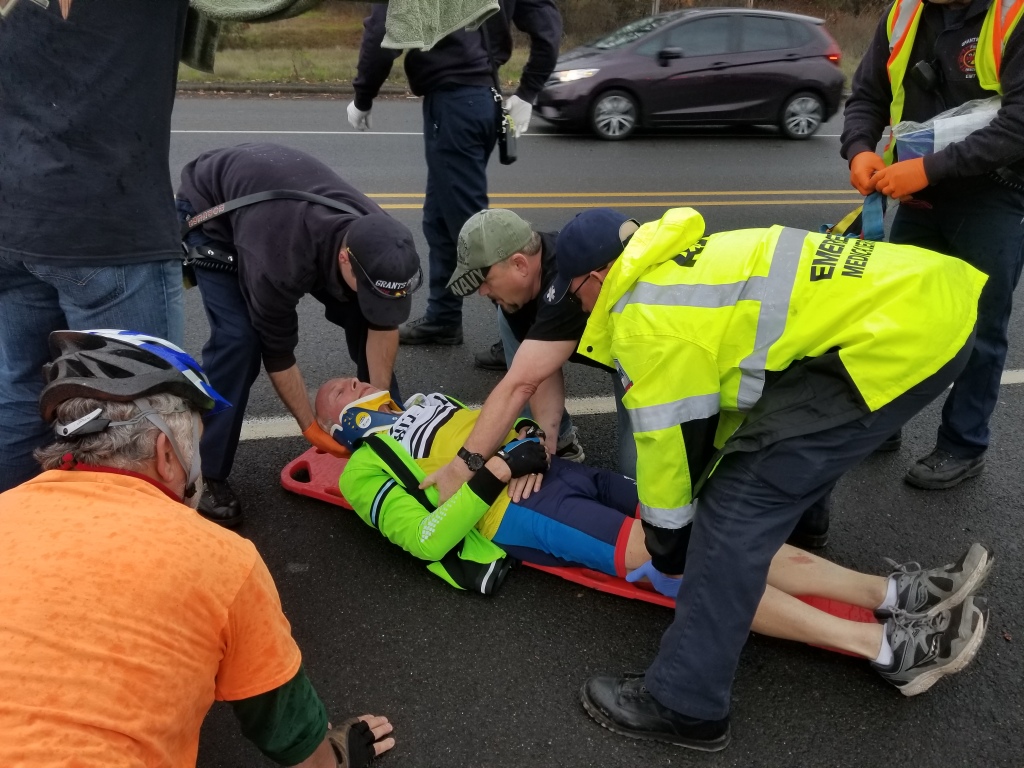 Then carried across to the ambulance.

I only properly regained consciousness when the ambulance was speeding its way to Three Rivers Hospital in nearby Grants Pass.

The attendant caring for me in the ambulance remarked how lucky I was to have been wearing a safety helmet, for had I not been: “We wouldn’t be taking you to the accident ward!”

Plus, I realised that the other stroke of fortune is that I was riding with a group of friends. Had I been riding alone, something I have been doing, I might not have been helped in such a prompt and timely way.

So that’s my lesson for today! If you ride a bicycle don’t go out alone and never, ever ride without a safety helmet!

In view of the many helpful ideas and suggestions I thought it would be good to present the follow information.

When I was discharged from the Emergency Department at our local Three Rivers Medical Center, I was given 4 pages of guidance and information. Page 3 of those notes included:

WHEN SHOULD I SEEK IMMEDIATE MEDICAL CARE?

You should get help right away if:

Plus when I saw the pharmacist at our local RiteAid, he took a look at the wounds on my left knee and recommended a transparent dressing; namely a product called Tegaderm. It is a product made by 3M and more details may be read about it here.

Thanks everyone for you caring responses!