Something brooding in the air!

The smoke from the forest fires in Oregon and California has been thick in the air here in Merlin for days.

As can be seen in the photograph below. The photograph is as it was captured by the camera at 7:15 am yesterday morning. No changes by me made at all. The middle tree line is at the Eastern end of our property about a 1/4 mile away. 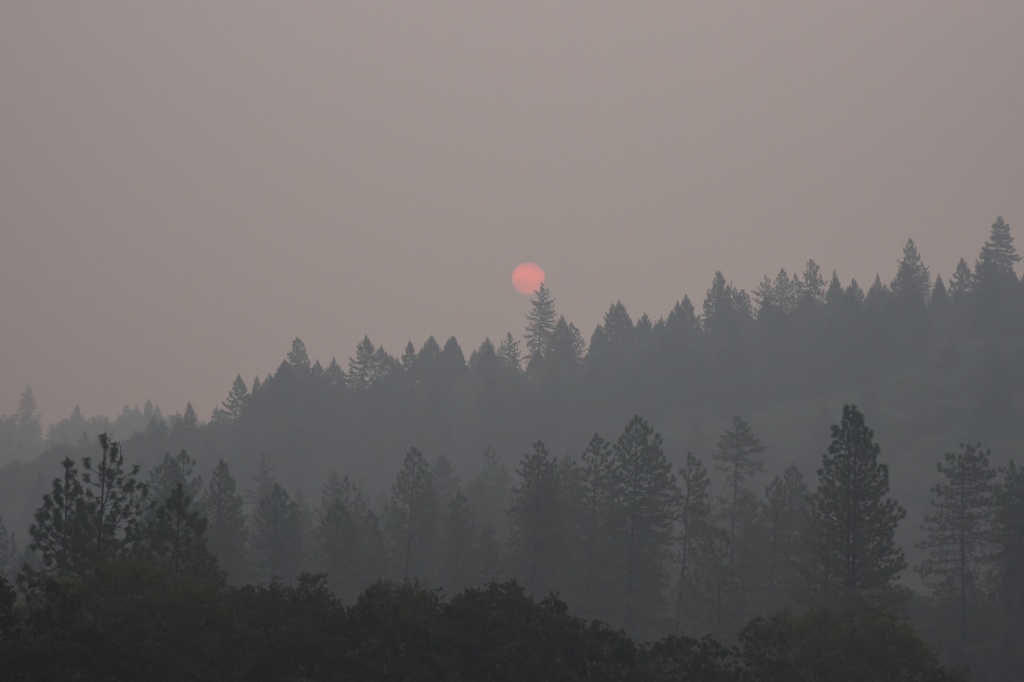 We are fed up with the smoke and the terrible air conditions.

But what drew me to grab the camera and take the photograph was that the image had some sort of, Oh, I don’t know, some sort of end of the world feeling about it.

It also seemed a most apt image to be an introduction to the latest essay from George Monbiot. It is republished here with Mr. Monbiot’s kind permission.

By George Monbiot, published in the Guardian 29 August 2017

It is not only Donald Trump’s government that censors the discussion of climate change; it is the entire body of polite opinion. This is why, though the links are clear and obvious, the majority of news reports on Hurricane Harvey have made no mention of the human contribution.

In 2016, the United States elected a president who believes that human-driven global warming is a hoax. It was the hottest year on record, in which the US was hammered by a series of climate-related disasters. Yet the total combined coverage for the entire year on the evening and Sunday news programmes on ABC, CBS, NBC and Fox News amounted to 50 minutes. Our greatest predicament, the issue that will define our lives, has been blotted from our minds.

This is not an accident. But nor (with the exception of Fox News) is it likely to be a matter of policy. It reflects a deeply ingrained and scarcely conscious self-censorship. Reporters and editors ignore the subject because they have an instinct for avoiding trouble. To talk about climate breakdown (which in my view is a better term than the curiously bland labels we attach to this crisis) is to question not only Donald Trump, not only current environmental policy, not only current economic policy, but the entire political and economic system.

It is to expose a programme that relies on robbing the future to fuel the present, that demands perpetual growth on a finite planet. It is to challenge the very basis of capitalism; to inform us that our lives are dominated by a system that cannot be sustained, a system that is destined, if it is not replaced, to destroy everything.

We know that the severity and impact of hurricanes on coastal cities are exacerbated by at least two factors: higher sea levels, caused primarily by the thermal expansion of seawater, and greater storm intensity, caused by higher sea temperatures and the ability of warm air to hold more water than cold air.

Before it reached the Gulf of Mexico, Harvey had been demoted from a tropical storm to a tropical wave. But as it reached the Gulf, whose temperatures this month have been far above average, it was upgraded first to a tropical depression, then to a category 1 hurricane. It might have been expected to weaken as it approached the coast, as hurricanes churn the sea, bringing cooler waters to the surface. But the water it brought up from 100 metres and more was also unusually warm. By the time it reached land, Harvey had intensified to a category 4 hurricane.

We were warned about this. In June, for example, Robert Kopp, a professor of earth sciences, predicted that “In the absence of major efforts to reduce emissions and strengthen resilience, the Gulf Coast will take a massive hit. Its exposure to sea-level rise – made worse by potentially stronger hurricanes – poses a major risk to its communities.”

To raise this issue, I’ve been told on social media, is to politicise Hurricane Harvey. It is an insult to the victims and a distraction from their urgent need. The proper time to discuss it is when people have rebuilt their homes, and scientists have been able to conduct an analysis of just how great the contribution from climate breakdown might have been. In other words, talk about it only when it’s out of the news. When researchers determined, 9 years on, that human activity had made a significant contribution to Hurricane Katrina, the information scarcely registered.

I believe it is the silence that’s political. To report the storm as if it were a entirely natural phenomenon, like last week’s eclipse of the sun, is to take a position. By failing to make the obvious link and talk about climate breakdown, media organisations ensure that our greatest challenge goes unanswered. They help push the world towards catastrophe.

Hurricane Harvey offers a glimpse of a likely global future; a future whose average temperatures are as different from ours as ours are from those of the last ice age. It is a future in which emergency becomes the norm and no state has the capacity to respond. It is a future in which, as a paper in the journal Environmental Research Letters notes, disasters like Houston’s occur in some cities several times a year. It is a future that, for people in countries such as Bangladesh, has already arrived, almost unremarked by the rich world’s media. It is the act of not talking that makes this nightmare likely to materialise.

In Texas, the connection could scarcely be more apparent. The storm ripped through the oil fields, forcing rigs and refineries to shut down, including those owned by some of the 25 companies that have produced over half the greenhouse gas emissions humans have released since the start of the Industrial Revolution. Hurricane Harvey has devastated a place in which climate breakdown is generated, and in which the policies that prevent it from being addressed are formulated.

Like Donald Trump, who denies human-driven global warming, but who wants to build a wall around his golf resort in Ireland to protect it from the rising seas, these companies, some of which have spent millions sponsoring climate deniers, have progressively raised the height of their platforms in the Gulf of Mexico, in response to warnings about higher seas and stronger storms. They have grown from 40 feet above sea level in 1940, to 70ft in the 1990s, to 91ft today.

This is not, however, a story of mortal justice. In Houston, as everywhere else, it is generally the poorer communities, that are least responsible for the problem, who are hit first and hit worst. But the connection between cause and effect should appeal to even the slowest minds.

The problem is not confined to the United States. Across the world, the issue that hangs over every aspect of our lives is marginalised, except on the rare occasions on which world leaders gather to discuss it in sombre tones (then sombrely agree to do almost nothing), whereupon the instinct to follow the machinations of power overrides the instinct to avoid a troubling subject. When they do cover the issue, they tend to mangle it. In the UK, the BBC distinguished itself in customary fashion this month, by yet again inviting the climate change denier Lord Lawson onto the Today programme, in the mistaken belief that impartiality requires a balance between correct facts and false ones. They seldom make such a mess of other topics, because they take them more seriously.

When Trump’s enforcers instruct officials and scientists to purge any mention of climate change from their publications, we are scandalised. But when the media does it, without the need for a memo, we let it pass. This censorship is invisible even to the perpetrators, woven into the fabric of organisations that are constitutionally destined to leave the major questions of our times unasked. To acknowledge this issue is to challenge everything. To challenge everything is to become an outcast.

Dear people, I sat staring at the screen for 10 minutes and then went off when Jeannie called lunchtime. Returned to the screen a little after 2pm yesterday and still couldn’t come up with a closing thought that merited being shared with you all.