Stories like this make my toes curl with pleasure!

Less than two weeks ago I shared an item that I had read about the firefighters of Santa Monica, CA, saving the life of a ten-year-old dog.

When Santa Monica firefighters were called to a burning apartment, they found the lifeless body of a tiny dog overcome by the heat and smoke on the floor of a bedroom. They pulled out the dog, named Nalu, but he wasn’t breathing and didn’t have a pulse.

Then two days ago, courtesy of the Care2 Causes blogsite, along comes another fabulous example of the care, love and generosity shown by firefighters. 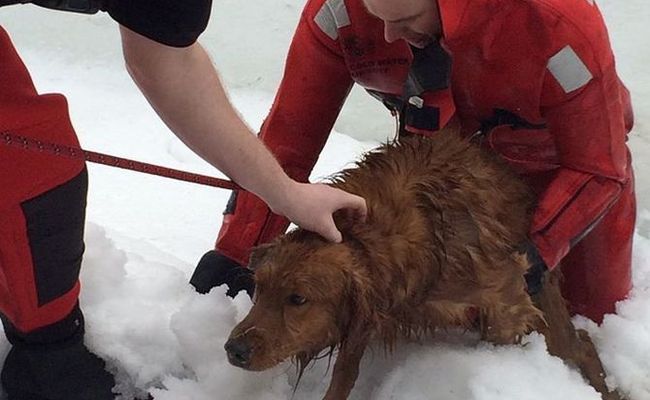 With perhaps just seconds to spare, North Hampton firefighter Will Taber barreled toward a dog who was barely clinging to thin ice last week in New Hampshire.

Three-year-old Emmett ran out onto his family’s frozen backyard pond, suddenly falling through the ice. Although homeowner Kacey Eddinger started into the pond to rescue him, she had to turn back when she realized the water was simply too cold. Eddinger and her toddler son waited anxiously for help to arrive.

The family isn’t certain exactly how long their golden retriever was in the water before they realized he’d fallen through, but by the time firefighters arrived, Emmett was exhausted and close to drowning.

In thermal ice rescue gear, firefighter Taber held a tethered line as he crossed the ice and entered the water. Once he reached Emmett, the other firefighters pulled the pair back to shore.

“The canine was exhausted and scared and minutes from going completely under water and carried by the current under the ice,” the Fire Department posted on Facebook. “The rescue was made just in time where he was then immediately warmed, carried to a police cruiser and transported to North Hampton Animal Hospital.”

Though spring has officially arrived, ice rescues have escalated due to the thin ice that remains on some bodies of water.

Again and again, I find myself rating actions such as these from the North Hampton Fire Fighters (and not forgetting the Santa Monica Fighters) so gloriously uplifting. Again and again, they serve as a reminder that real people all around the world are so very often wonderful, generous and loving real people!

11 thoughts on “Another Firefighters’ Dog Rescue”