This is becoming compelling!

Susan said in response to yesterday’s post: “It feels as if we are joining them on their adventure.”

I said I truly felt the same way.

This walk of Tom and his dogs is so wonderfully described, and written up by Gilliwolfe, that it does feel that we are sharing the adventure; albeit in spirit only.

The photographs are to die for as well.

Here’s the next chapter.

Days 9 and 10 Bonacoaz to Indiana via Montejaque 34k 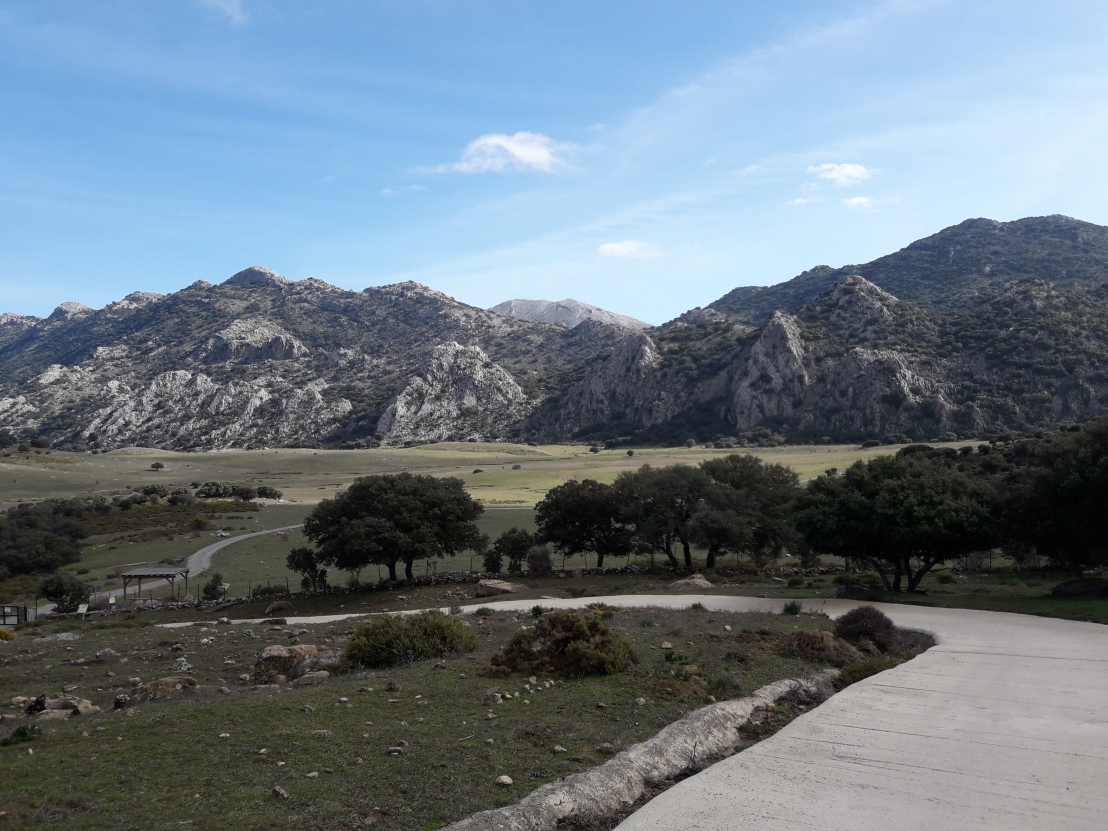 Another glorious day but it took us quite a while to get organised. Tom was determined not to forget anything vital for the first overnighter so it was 10.30 by the time we left. Making our way back to Benacoaz through Ubrique, where Los Alcornacales gives way to the Sierra de Grazalema, the landscape looked stunning in the sunshine.

Setting off all together, we climbed out of the village between fields dotted with wild iris onto the ridge above where I left the intrepid pair for their two-day trek. Tom had done this walk before a few years ago and had loved it so was keen to revisit.

Grazalema Natural Park was designated a Unesco Biosphere reserve in 1977 and the Sierra de Grazalema was declared the first natural park in Andalucia in 1984. It is one of Spain’s most ecologically outstanding areas. The 51,695 hectare park is famous for its spectacularly rugged limestone landscape of cliffs, gullies, caves and gorges.

The region is well known for being the rainiest place in Spain, with an annual rainfall of 2,200mm, which means that the 1,300 Mediterranean plant species that have been registered here, many of them endemic and some of them unique to the Sierra, flourish. 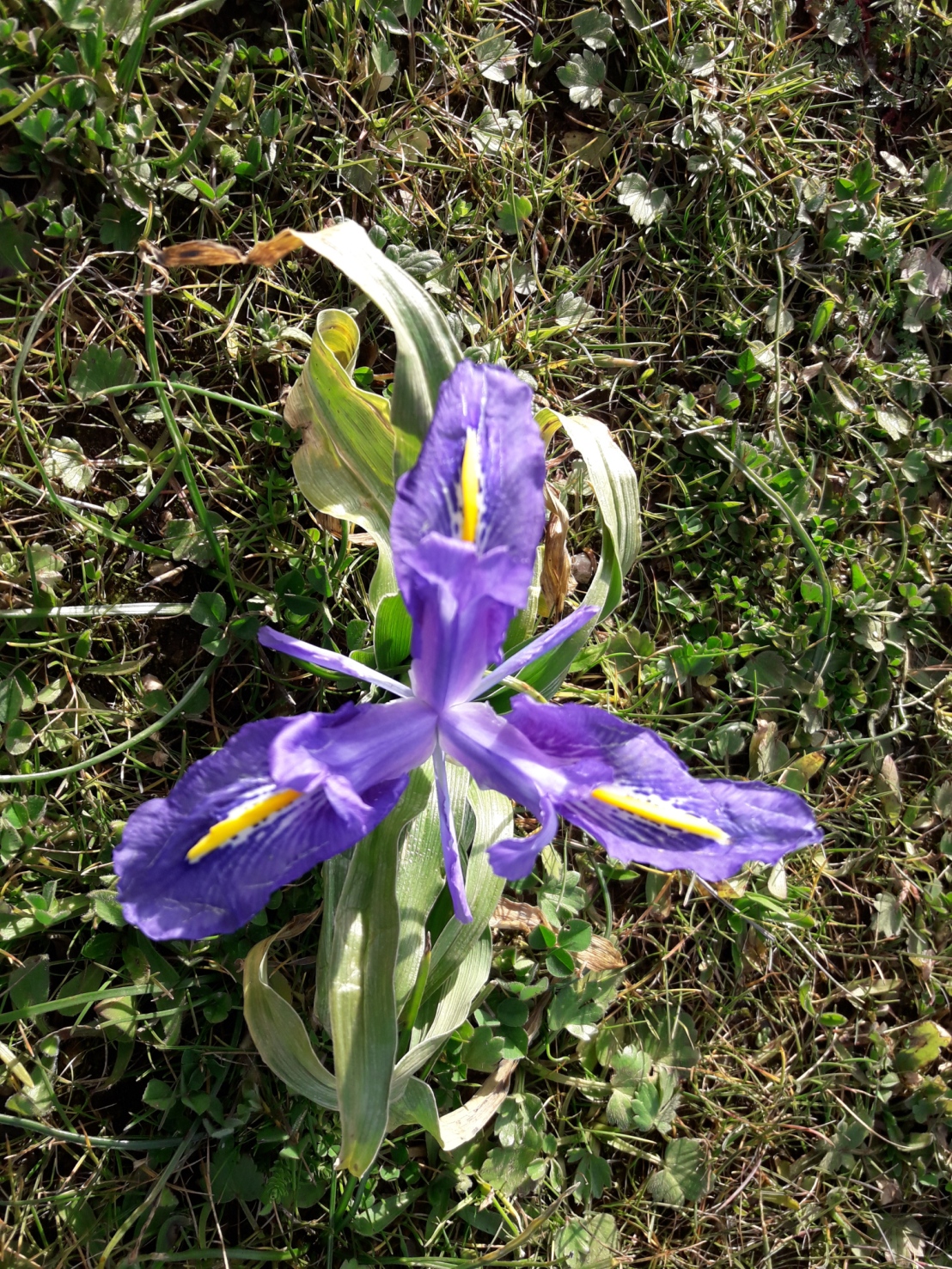 The town of Grazalema, which nestles between two rugged peaks is well worth a visit, not only because of its spectacular setting, but because there is a bakery selling the best cakes I’ve ever tried. Sadly for Tom, this wasn’t on today’s route. 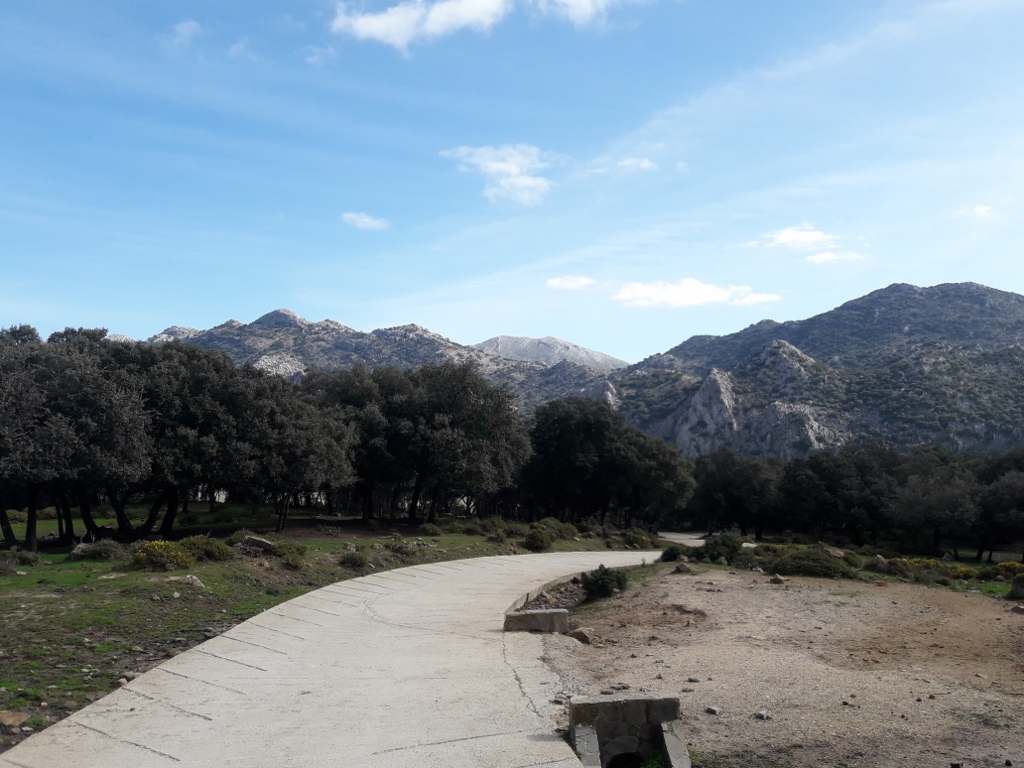 With large birds of prey cruising on the thermals above, the pair headed down the concrete track – easy on the feet – through the forest with views to the Montes Grupo de Libar (Libar mountain range) beyond. The path then climbed up a rocky staircase between peaks before descending through scrubland to the vast flat-bottomed Libar valley. This is really a high plain and the lush grass provides grazing for the local cattle, giving the area the appearance of a prairie in a Western. 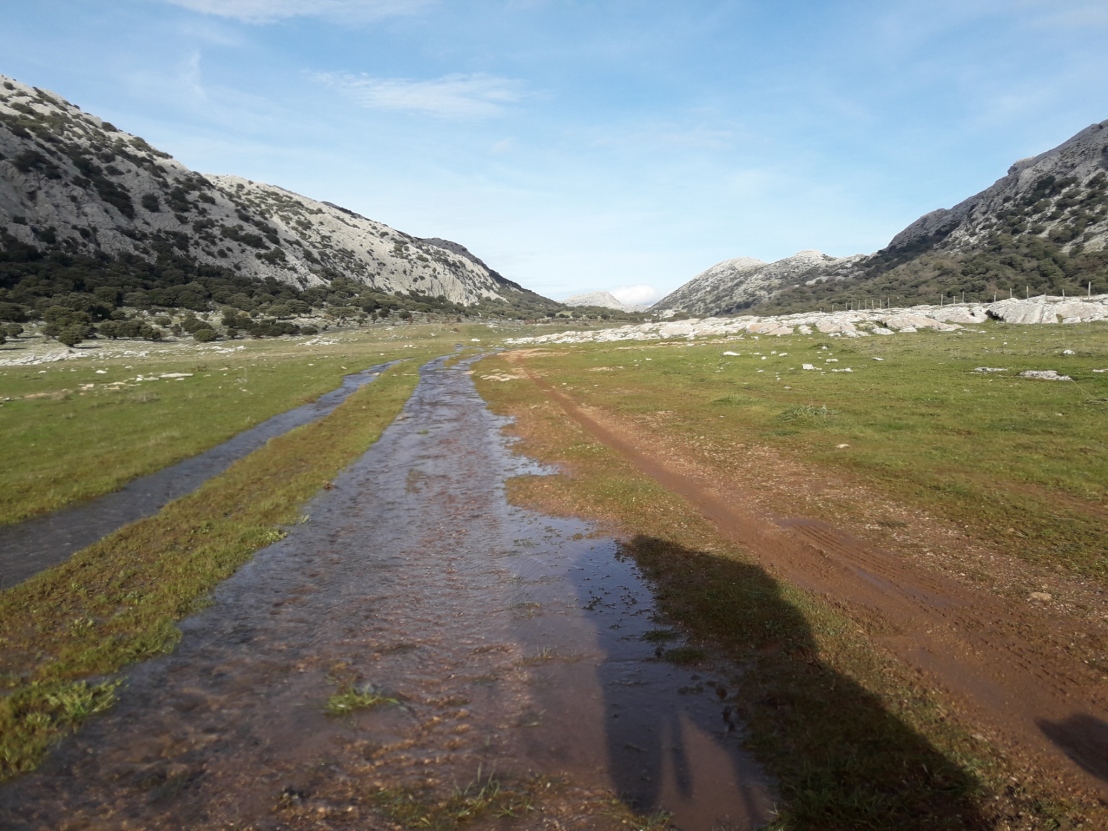 They headed west on an undefined path until reaching a large stone hut which offers shelter to hikers in summer but was closed up, presumably not anticipating mad Englishmen and their dogs arriving in mid-winter. However, it provided a good spot to strike camp, with water and a table for cooking and eating. Once she’d been fed and watered, Chica wanted to go to bed. She sat in her night jacket demanding entry to the tent but had to wait while Tom ate his freeze-dried hot pot!

Sleep was a little disturbed as Chica growled at the various grunts and howls in the night. At one point, Tom got up to investigate, concerned that there may be a hoard of marauding wild boar in the vicinity. There wasn’t, but the clear night sky was beautiful so far from civilisation.

In the morning, it was cold as the surrounding peaks screened the sun. Out of the early mist, a herd of small deer, probably roe, crossed the valley and a fox passed close by, alerting a sleepy Chica who opened one eye and then went back to sleep.

By 10, breakfasted and packed, they continued to the end of the high plain. From here the track gradually descended towards the pueblo blanco (white village) of Montejaque. Here they relaxed in a café for a while before continuing over the next range of hills to meet me on the road a few miles outside Ronda. Chica looked very pleased to see us!

“Was it as good as you remembered?” I asked.

“And the camping? Everyone here thought you’d freeze to death”

Wonderful! Just take, for example, that last photograph. What colours, what intense contrast, what a beautiful scene.

That isn’t the only one by far!

I don’t want this walk to end and I’m sure you echo my thoughts.

2 thoughts on “Days Nine and Ten of Tom and Chica’s walk.”