Reflections on the Great March through Payson, Arizona.

In yesterday’s post The Natural order I referred to Payson recently welcoming the Great March for Climate Action in their walk from Los Angeles to Washington D.C.  I also referred to writing an essay on the event. That now follows, starting with a report from John Hurlburt, one of the organisers.

Thanks for your help for “the Great March for Climate Action”

“The Great March for Climate Action” arrived In Payson mid-afternoon on April 14. We had learned that the majority of the marchers are in the “younger” category (under 40), including two girls ages 10 and 12, walking for about a week of the journey with their Mom. But, impressively, quite a few are “AARP-ers”, in their 60’s and 70’s — walking all the way! Most of the group plans to continue on to Washington, D.C., being joined in various sections by hundreds of others! Our efforts aimed at making their brief visit to Payson as friendly and comfortable as possible.

They arrived at the meeting spot by the Event Center, having hiked up from near Rye, about twelve miles with significant elevation gain. Though weary, they were friendly and enthusiastic. Jim Speiser and family had set up their hot-dog cart, and we provided cold water and fresh fruit donated by Safeway — a case of huge premium oranges, and a case of bananas. The Marchers were delighted with the snacks, and extra fruit was given to their “chuck-wagon” for future days.

About ten local folk joined the Marchers on the two mile walk to the Payson Christian School, following their beautiful banners and signs. A local Boy Scout Color Guard led the procession and two Payson Police vehicles accompanied the March all the way. People in passing cars waved, smiled, honked and took pictures. Exhilarating and fun! A feature writer/photographer from the Payson Roundup covered the March, both along the route and at the school, where she took group photos and interviewed some of the participants.

Marchers who desired showers/clean laundry were transported to various Payson homes. Some of the group rested in their tents that were clustered on the sports field grass, and others helped with our dining room and kitchen set-up for the dinner. Food from our Payson volunteers began to arrive at five pm and by six the big buffet tables were loaded with delicious hot dishes, sides, snacks, beverages, salad and desserts, and the dining room was packed nearly to overflowing.

The evening opened with a Proclamation of welcome from the Mayor and Town Council, read by Ed Blair, and a prayer. John Hurlbert introduced the evening program that began with a talk about the History of Marches by Ray Spatti. Rob Ingram gave an overview of Payson, its achievements, water and forest issues, and future. Various participants in the March described their adventures, goals and dreams and asked about Payson’s outlook regarding environmental issues. Interacting with these dedicated Marchers was an education, a pleasure and an inspiration, perhaps motivating our Town to step ahead with sustainable solutions. In fact we heard that a young woman from here in Payson is going to join the “Great March”!

Our evening peaked with a delightful music performance by Cinnamon Twist and a sing-along. A number of Marchers were also musicians and they joined in with their instruments, resulting in a spontaneous “jam session” that brought the evening to a grand and joyful conclusion.

We couldn’t have done it without the amazing generosity and assistance from the Payson Christian School and their Staff, and without volunteers like you. Countless Marchers said they were overwhelmed by the friendly reception they received, and it was due to great team-work and local involvement. All the small things you did – offering showers, bringing food, walking with the Marchers, coming to the dinner – added up to a most memorable event. It is through small daily things that we can make a difference in our world — and all of you certainly have.

We can’t thank you enough!

These were some photographs sent on by John. 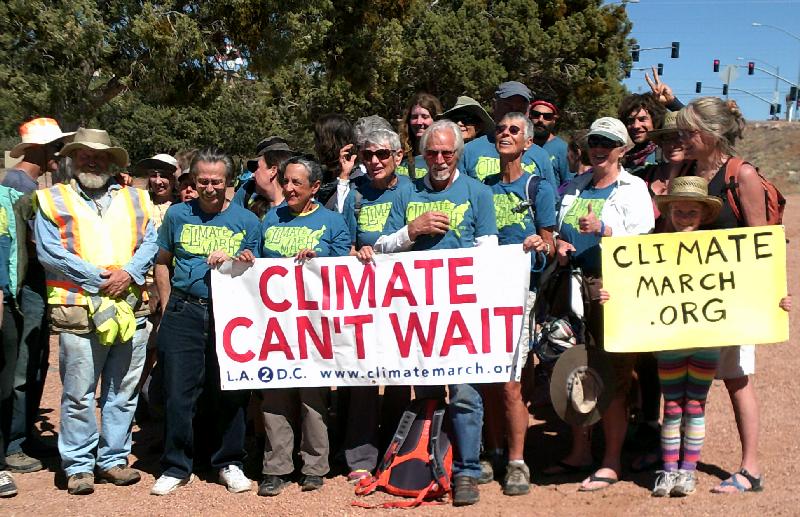 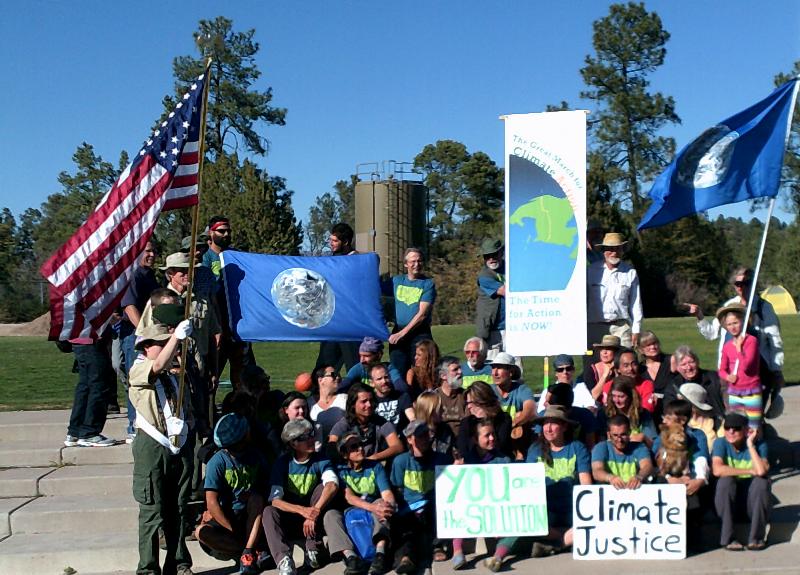 But it’s no good just thinking how wonderful it was for Payson to be involved, and for the marchers in their nearly 3,000 mile walk from Los Angeles to Washington DC.  Each of us who cares for a sustainable future on Planet Earth must make a difference.  As is now a common plea: “Think globally: Act locally.”

One story that came out from the march through Payson struck me forcibly.  MaryAnne, a good friend of this blog, offered, as did others, laundry and washing facilities to two young marchers.  One of them, a young girl, was so committed to the message behind the march that she had vowed to remain silent from start to finish; the only exception being singing in the evenings.  I was blown away by that commitment.

Read the full details of the event from the Transition Town Payson website.

Will close by offering these two items.

The first is picking up the relevant Editorial headline from the Arizona Republic of the 17th April.

Our View: It’s time to move beyond denial and become part of the solution

The second is asking you to watch this short video.

On March 1, 2014, 1,000 climate patriots will set-out from Los Angeles, CA, walking 2,980 miles across America to Washington, DC, inspiring and motivating the general public and elected officials to act now to address the climate crisis. This will be the largest coast-to-coast march in American history.
Credits: