Jeannie and I decided to take a few hours away from the house and go and do some local exploring.

Just 10 miles North of us, indeed the next exit (71) from Highway I-5, is the famous Grave Creek Covered Bridge.

We parked up and soaked it all in. 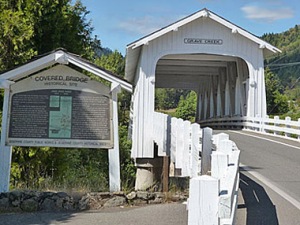 on the Southern Oregon travel site.

The Grave Creek Covered Bridge is one of the few covered bridges that remain in southern Oregon. From Vancouver B.C. to the Mexican border, it is the only one visible from the I-5 freeway. Be sure to visit the Applegate Trail Interpretive Center while in Sunny Valley. It provides a first hand look into the local area, history, fabulous displays, theatre & more.

In the fall of 1846, the first emigrant train from Fort Hall, Idaho, to travel the southern route to the Willamette Valley camped on the north side of this creek, then Woodpile Creek. Martha Leland Crowley, 16 years old died of typhoid fever during this encampment and was buried 150 feet north of the creek on the east side or a white oak tree that was later removed for the present roadway, Thus the name “Grave Creek”.

When James H. Twogood laid out his land claim in the fall of 1851 and filed it on May 1st 1852, he named it the Grave Creek Ranch in memory of that unfortunate incident.

McDonough Harkness, his partner, was the first postmaster of Josephine County in the newly named town of Leland on March 28,1855. Harkness was killed by the Indians in April 1856 while riding dispatch for the Army during the second Indian War of southern Oregon which started in October of 1855.

Unsurprisingly, the creek had very little water in it.

But that didn’t diminish in the slightest the magic of this place out in the vast Oregon countryside.

WikiPedia has a nice entry explaining the rationale behind building a covered bridge.

A covered bridge is a timber-truss bridge with a roof and siding which, in most covered bridges, create an almost complete enclosure. The purpose of the covering is to protect the wooden structural members from the weather. Uncovered wooden bridges typically have a lifespan of only 10 to 15 years because of the effects of rain and sun. The brief moment of relative privacy while crossing the bridges earned them the name “Kissing Bridges”.

Back to dogs tomorrow!