Looking into the history of the Great Pyrenees dog.

This coming Saturday will be one month since Brandy entered our lives and to say he has been a gorgeous addition to our family is an understatement!

I was looking at him yesterday afternoon at feeding time (usually 3pm) and just saw his size in comparison to the window ledge and the chair next to him: he is a large dog!

Two things raced through my mind, the first being to grab a camera and take the following shot,

and the second to research the history of this breed. (But I should immediately say that Brandy is not purebred Pyrenean and has a little Bull Mastiff within him.)

That second item was but a quick web search away for top of the list of returns was an article on the website of the Great Pyrenees Club of America. The article was appropriately headed: History of the Great Pyrenees. It is fully linked to the source website so, fingers crossed, it is OK to republish here. I hope you find it as interesting as we did.

History of the Great Pyrenees

Dog of the Mountains

These dogs take their name from the mountain range in southwestern Europe, where they long 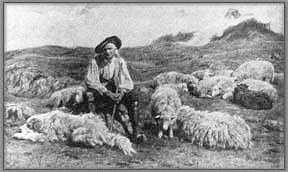 have been used as guardians of the flocks. In the United States they are called Great Pyrenees. In the United Kingdom and on the continent of Europe, they are known as the Pyrenean Mountain Dog. In their native France, they are Le Chien de Montagne des Pyrenees or Le Chien des Pyrenees. Whatever the name, it is a beautiful, primarily white dog with a “certain elegance” which for centuries has been the working associate of peasant shepherds high on the mountain slopes.

The breed likely evolved from a group of principally white mountain flock guard dogs that originated ten or eleven thousand years ago in Asia Minor. It is very plausible that these large white dogs arrived in the Pyrenees Mountains with their shepherds and domestic sheep about 3000 BC. There they encountered the indigenous people of the area, one of which were the Basques, descendants of Cro-Magnon Man. In the isolation of the Pyrenees Mountains over these millenniums, the breed developed the characteristics that make it unique to the group of flock guardian dogs in general and the primarily white members of that group.

In 1407, French writings tell of the usefulness of these “Great Dogs of the Mountains” as guardians of the Chateau of Lourdes. In 1675, they were adopted as the Royal Dog of France by the Dauphin in the court of King Louis XIV, and subsequently became much sought after by nobility. Having a precocious sense of smell and exceptionally keen eyesight, each dog was counted equal to two men, be it as guard of the chateaux, or as invaluable companion of shepherds. While their royal adoption is interesting, the dogs main fame was from their ageless devotion to their mountain flocks, shepherds, and shepherds’ family. When not working the flocks, you would find “Patou,” as he is lovingly called, laying on the mat in the front doorway of the shepherds’ humble dwellings.

In 1662, dogs were carried to Newfoundland by Basque fishermen as companions and guardians of the new Settlement. Here it was they became mated with the black curly coated retriever, favorite of the English settlers. This cross resulted in the formation of the Landseer (black and white) Newfoundland. In 1824, General Lafayette introduced the first pair to America by bringing over two males to his friend, J.S. Skinner, author of “The Dog and the Sportsman”.

In 1870, Pyrenean blood was used with that of other large breeds to help bring back the St. Bernard after that noble dog’s numbers had been so greatly depleted by avalanches and distemper at the hospice in Switzerland. It was not until 1909 that the first Pyrenean Mountain Dogs were introduced into England for breeding purposes by Lady Sybil Grant, daughter of Lord Roseberry. It was twenty-six years later (1935) that Pyreneans were again bred in a kennel in England. At that time, Mme. Jeanne Harper Trois Fontaines started her de Fontenay Kennel at Hyde Heath, Amersham, later becoming well known the world over and accounting for many exports to distant lands.

By the late 1800’s and early 1900’s the state of the breed had deteriorated due to the vanishing of the natural predator foes in the mountains and the practices of many unscrupulous breeders selling to naive tourists through the region.

In 1907 Monsieur Dretzen from Paris, along with Count de Bylandt of Holland and Monsieur Byasson of Argeles Gazost, formed the Club du Chien des Pyrenées (CCP) a.k.a. Argeles Club in Argeles Gazost. They combed the mountains for a group of “faultlessly typical” specimens. Monsieur Dretzen took these dogs back to his kennel in Paris. Also in 1907, the Pastoure Club at Lourdes, Hautes Pyrenées, France, was organized to perpetuate interest in the breed. Each club wrote a breed standard.

After the decimating effects of World War I, the breed’s numbers and quality had been severely compromised. A few dedicated breeders, headed by Monsieur Senac Lagrange, worked to restore the breed to its former glory. They joined together the remnants of the two former clubs and formed the Reunion des Amateurs de Chiens Pyreneans which still exists today. It was this club that was responsible for the breed standard being published in 1927. This standard has served as a basis for all current standards for the breed. After World War II, it was again Monsieur Senac-Lagrange who took the lead in getting the breed back on its feet from the devastating effects of the German occupation.

First Kennel in the U.S.A.

In 1931, Mr. and Mrs. Francis V. Crane imported several specimens to seriously launch the breed in North America with the founding of the Basquaerie Kennels at Needham, Massachusetts. Their lifelong efforts on behalf of the breed provided the breed with an atmosphere in which it could thrive and prosper. They imported important breeding stock out of Europe just before the Continent was closed by World War II. The American Kennel Club accorded the Great Pyrenees official recognition in February, 1933, and beginning April, 1933, separate classification began for the breed at licensed shows.

Today the Great Pyrenees is a working dog as well as a companion and family dog. Most of our dogs never see a show ring, but they are trusted and beloved members in homes and may function as livestock guardian dogs on farms and ranches. The Great Pyrenees is proving itself very versatile, gaining fame as therapy dogs, rescue dogs, and many activities with its human companions. They are very social dogs in the family and get along extremely well with other animals that belong to the shepherd, farmer, or family. They are wary of strangers in the work environment (this includes the home). They adapt easily to other situations such as dog shows, and make extraordinary ambassadors for the breed in many settings such as hospitals, old age homes, with children, etc. They have a special ability to identify and distinguish predators or unwelcome intruders. They are nurturing of small, young, or sick animals.

I must repeat a couple of sentences from that last paragraph (my highlighting):

The Great Pyrenees is proving itself very versatile, gaining fame as therapy dogs, rescue dogs, and many activities with its human companions. They are very social dogs in the family and get along extremely well with other animals that belong to the shepherd, farmer, or family.

Frankly, I don’t know how we would have coped with what Hazel has been suffering with if Jean and I hadn’t had the bountiful, unconditional love from Brandy.

…. here she is tucking into her second meal of the day alongside Mr. Big!

Fingers tightly crossed dear, sweet Hazel may be beating the infection! (You see, I did say all your loving wishes were making a difference!)