The future President of the USA.

This article has quite a serious element to it. Namely, about not trusting a person who doesn’t like a dog.

But before I go to the article let me just say to my grandson:

Could a dog pick the next president? 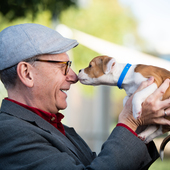 I’m not sure who first said it, but it’s clear a lot of people agree with the sentiment: “Never trust a person who doesn’t like dogs.” Many pet lovers share the belief that a person’s attitude to dogs reveals something essential about their character.

During the political campaign season, Americans are deciding who has the characteristics, skills and temperament to be president. As a dog psychologist and founder of the Canine Science Collaboratory at Arizona State University, I spend my time studying the relationship between dogs and their people. I’d certainly be happy if a candidate’s attitude toward dogs could offer a simple way to evaluate a leader’s personality, cutting to the essence of a person’s character and clinching my vote without needing a detailed assessment of their policy proposals.

Is it enough just to follow the leash to choose a leader? There must be good people with bad dogs, or no dog at all, and some notoriously bad people who were loved by their dogs, no? But I want to believe that canine companionship can still shed light on human character and help us pick a candidate.

Dogless in the White House

For the past three years, the pup-parazzi have been speculating on President Donald Trump’s dogless existence at the White House. It’s certainly most common for the president to have a dog – perhaps because, as someone reputedly said, “If you want a friend in Washington, get a dog.”

The Washington Post has claimed that every occupant of the White House since William McKinley has had a dog at some point. Just a couple of weeks ago, Trump declared at a rally that having a dog would be “phony.”

The only dog he has expressed any enthusiasm for while in office was the Belgian Malinois involved in the raid that resulted in the death of Islamic State group leader Abu Bakr al-Baghdadi. As for al-Baghdadi, Trump said he “died like a dog.”

Among the Democratic front-runners, Joe Biden shares his life with a German shepherd, Major. This may be a good move for the uniformed vote: German shepherds are a favored breed of military and police forces. Biden has always preferred German shepherds, but, for his latest – acquired in November 2018 – he softened the image by adopting a puppy that had been exposed to toxic chemicals and was being cared for by the Delaware Humane Society.

Biden might want to be careful of the historical baggage that comes with this popular large breed. The most famous German shepherd in politics must surely have been Blondi, the dog Adolf Hitler himself said was the only being that loved him.

Elizabeth Warren has a dog with a gentler association. Warren’s stereotypically family-friendly golden retriever, Bailey, is named for George Bailey from the movie “It’s a Wonderful Life.” Warren said she named her dog for “a guy who was decent, determined and saw the best in people.” Warren’s Bailey is front and center in all her campaign activities.

Bailey features so prominently in his owner’s social media feeds that Warren might want to be careful not to be upstaged by her pooch. George H.W. Bush’s dog, Millie, published a memoir that outsold President Ronald Reagan’s contemporaneous “An American Life.”

Pete Buttigieg has suspended his campaign, effectively dropping out of the race. He and his husband Chasten already had a shelter mutt, Truman, when they added another – Buddy – to their household in December 2018. Marie Claire magazine considers Buddy and Truman “the cutest fur babies in all of politics.” Buddy is the ultimate underdog: rescued from a shelter, of no particular heritage. With only one eye, he peeks out from Instagram voicing droll commentary on the goings-on.

Other candidates either have no dog or are happy to keep their canine enthusiasms to themselves.

The Facebook group “Pet Lovers for Bernie Sanders” had to photo-edit dogs into an image of Sanders and his wife, who have no dog.

Michael Bloomberg was in the “apparently dogless” camp until just the other week when he got into a spot of dog difficulty by shaking a pooch by its snout rather than engaging in one of the more customary forms of interspecies greeting. The dog looked unperturbed, but pet lovers on social media roasted Bloomberg for his maladroitness.

The billionaire’s campaign quickly stitched together a 30-second ad spot of dogs voiced to endorse their candidate – ending with a cute white Lab who “says,” “I’m Mike Bloomberg’s dog, and I approve this message.”

Of course, dogless people get elected all the time – they can always pick up a pooch later. The Obama family did not acquire their dog, Bo, until three months after the inauguration. Having originally indicated an interest in rescuing a shelter mutt, they ended up with a pedigree Portuguese water dog because of their daughter Malia’s allergies. Though often known as the “Big Dog,” Bill Clinton did not acquire a dog of his own, a chocolate Labrador retriever, until his second term.

On Trump’s doglessness, the memoirs of his ex-wife, Ivana, are often quoted: “Donald was not a dog fan. When I told him I was bringing Chappy with me to New York, he said, ‘No.’ ‘It’s me and Chappy or no one!’ I insisted, and that was that.” But two sentences farther on – and far less frequently cited – Ivana adds, “Donald never objected to Chappy’s sleeping on my side of the bed.”

In fact, from 2010 to 2015, the Westminster Kennel Club had a tradition of sending the winner of its annual show to be photographed with Trump at his eponymous New York tower. Images from that time show Trump happily hugging the pooches.

Witness accounts from these meetings, quoted by Snopes.com in an assessment of the claim that Trump hates dogs, recall Trump thoroughly enjoying himself cuddling the prize-winning canines. Snopes concluded that claims Trump considers dogs “disgusting” were just plain false.

Meanwhile, Harry Truman, to whom the claim about dog friendship in Washington is often mistakenly attributed, not only declined to bring a dog into the White House; he actually gave away a cocker spaniel puppy named Feller that was given to him.

Asked at a press conference in April 1947 what had become of the pup, Truman responded: “To what?” On receiving clarification, he lied, “Oh, he’s around.” In fact, Truman had already given Feller away to his physician, Brig. Gen. Wallace Graham.

Much as we might like dogs to tell us whom to vote for, the truth is, dogs are such forgiving assessors of human character that their appraisals need to be taken with more than a pinch of salt. We may just have to do the hard yards and learn about the candidate’s policies. It isn’t easy. Maybe not having to participate in a democracy is what keeps our dogs so happy.

This is both a lovely and intelligent article. Professor Clive Wynne raises some important points but concludes that we shouldn’t take it too seriously. I, for one, would not trust a person who doesn’t like dogs!

Click here to leave a goodbye message
Join 4,288 other subscribers.