Good people, this is mid-Winter.

OK, not in the sense of weather because the worse is yet to come I’m sure. But in terms of the movement of the Planet Earth in its orbit around the Sun. And that’s what matters!

This is a really ancient moment as the following article published in The Conversation explains in much more detail.

What winter solstice rituals tell us about indigenous people

By Rosalyn R. LaPier   Associate Professor of Environmental Studies, The University of Montana

On the day of winter solstice, many Native American communities will hold religious ceremonies or community events.

As a scholar of the environmental and Native American religion, I believe, there is much to learn from ancient religious practices.

For decades, scholars have studied the astronomical observations that ancient indigenous people made and sought to understand their meaning.

One such place was at Cahokia, near the Mississippi River in what is now Illinois across from St. Louis.

In Cahokia, indigenous people built numerous temple pyramids or mounds, similar to the structures built by the Aztecs in Mexico, over a thousand years ago. Among their constructions, what most stands out is an intriguing structure made up of wooden posts arranged in a circle, known today as “Woodhenge.”

To understand the purpose of Woodhenge, scientists watched the sun rise from this structure on winter solstice. What they found was telling: The sun aligned with both Woodhenge and the top of a temple mound – a temple built on top of a pyramid with a flat top – in the distance. They also found that the sun aligns with a different temple mound on summer solstice.

Archaeological evidence suggests that the people of Cahokia venerated the sun as a deity. Scholars believe that ancient indigenous societies observed the solar system carefully and wove that knowledge into their architecture.

Scientists have speculated that the Cahokia held rituals to honor the sun as a giver of life and for the new agricultural year.

Zuni Pueblo is a contemporary example of indigenous people with an agricultural society in western New Mexico. They grow corn, beans, squash, sunflowers and more. Each year they hold annual harvest festivals and numerous religious ceremonies, including at the winter solstice.

At the time of the winter solstice they hold a multiday celebration, known as the Shalako festival. The days for the celebration are selected by the religious leaders. The Zuni are intensely private, and most events are not for public viewing.

But what is shared with the public is near the end of the ceremony, when six Zuni men dress up and embody the spirit of giant bird deities. These men carry the Zuni prayers for rain “to all the corners of the earth.” The Zuni deities are believed to provide “blessings” and “balance” for the coming seasons and agricultural year.

As religion scholar Tisa Wenger writes, “The Zuni believe their ceremonies are necessary not just for the well-being of the tribe but for “the entire world.”

Not all indigenous peoples ritualized the winter solstice with a ceremony. But that doesn’t mean they didn’t find other ways to celebrate.

The Blackfeet tribe in Montana, where I am a member, historically kept a calendar of astronomical events. They marked the time of the winter solstice and the “return” of the sun or “Naatosi” on its annual journey. They also faced their tipis – or portable conical tents – east toward the rising sun.

Later, in my own research, I learned that the Blackfeet moved their dances and ceremonies during the early reservation years from times on their religious calendar to times acceptable to the U.S. government. The dances held at the time of the solstice were moved to Christmas Day or to New Year’s Eve. 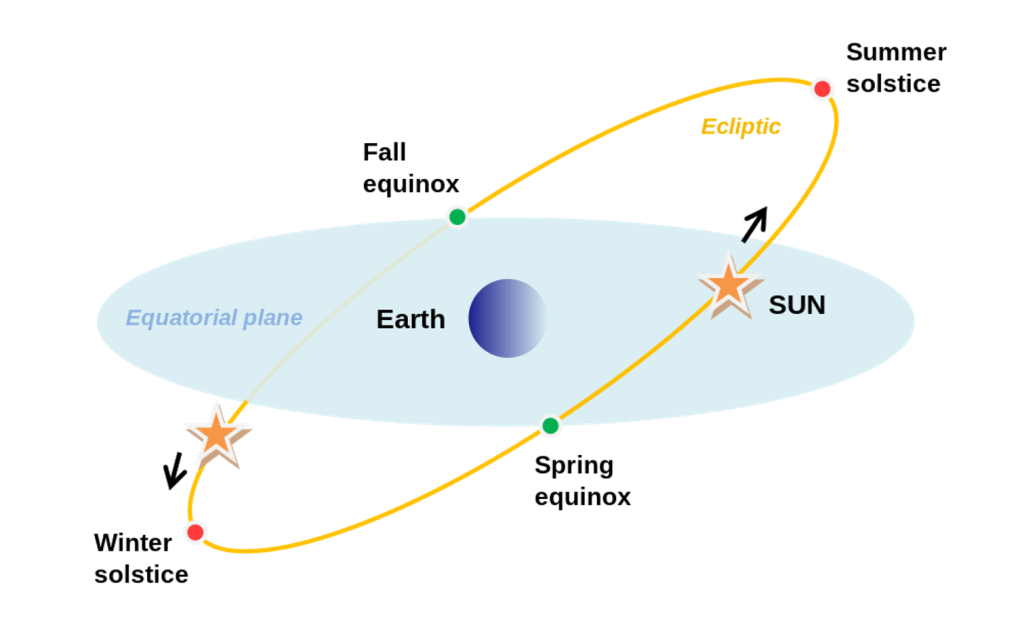 The solstice. Divad, from Wikimedia Commons

Today, my family still spends the darkest days of winter playing card games and attending the local community dances, much like my grandmother did.

Let me pick up on the last sentence: “Or as the Zuni Pueblo’s rituals for all peoples of the earth demonstrate – of an ancient understanding of the interconnectedness of the world.”

We are all of us interconnected across the world. We have been for a very long time.

11 thoughts on “That Winter Solstice”