The recent rain storm that has affected much of the Western seaboard of the USA; albeit primarily California.  The BBC News reported online that:

More than 220,000 people are without power after heavy rains and high winds slammed northern California.

The storm brought rainfall of more than an inch an hour in San Francisco and winds gusts of 140mph (225km/h) in the Sierra Nevada mountains.

The rain is much needed in the drought-hit state but mudslides are a concern.

Power cuts were widespread, from the suburban area south of San Francisco to Humboldt, near the Oregon border.

Thus the morning afterwards, it was wonderful to receive an email from Dan Gomez that put not only this last storm into context but also a long history of very significant deluges.  Bet you will be as surprised as I was when you read it!

What Is This “Atmospheric River” That Is Flooding California?

The views expressed are those of the author and are not necessarily those of Scientific American.

The San Francisco Bay Area is getting flooded with relentless rain and strong winds, just like it did a week ago, and fears of rising water are now becoming very serious. Major news stations, weather channels, Web outlets and social media are all suddenly talking about the “atmospheric river” that is bringing deluge after deluge to California, as well as the coast of Washington. What is this thing? How rare is it? And how big of a threat could it be? Here are some answers. And see our graphics, below, taken from a brilliant and prescient feature article written by Michael Dettinger and Lynn Ingram in Scientific Americanin January 2013.

Not interested? In 1861 an atmospheric river that brought storms for 43 days turned California’s Central Valley into an inland sea 300 miles long and 20 miles wide. Thousands of people died, 800,000 cattle drowned and the state went bankrupt. A similar disaster today would be much more devastating, because the region is much more populated and it is the single largest food producer in the U.S.

So maybe 1861 was an oddity. Not really. Geologic core samples show that extreme floods like the one in 1861 have happened in California about every 200 years, since the year 200 A.D. So the next disaster could be coming around the bend. The West Coast has actually been slowly constructing large, specialized, meteorological observatories that can sense atmospheric rivers as they develop, so forecasters can give early warnings.

An atmospheric river is a conveyor belt of vapor that extends thousands of miles from out at sea, carrying as much water as 15 Mississippi Rivers. It strikes as a series of storms that arrive for days or weeks on end. Each storm can dump inches of rain or feet of snow. Meteorologists sometimes call small occurrences “pineapple expresses,” because they tend to flow in a straight line from around Hawaii toward the U.S. West Coast. The graphic below explains the details. 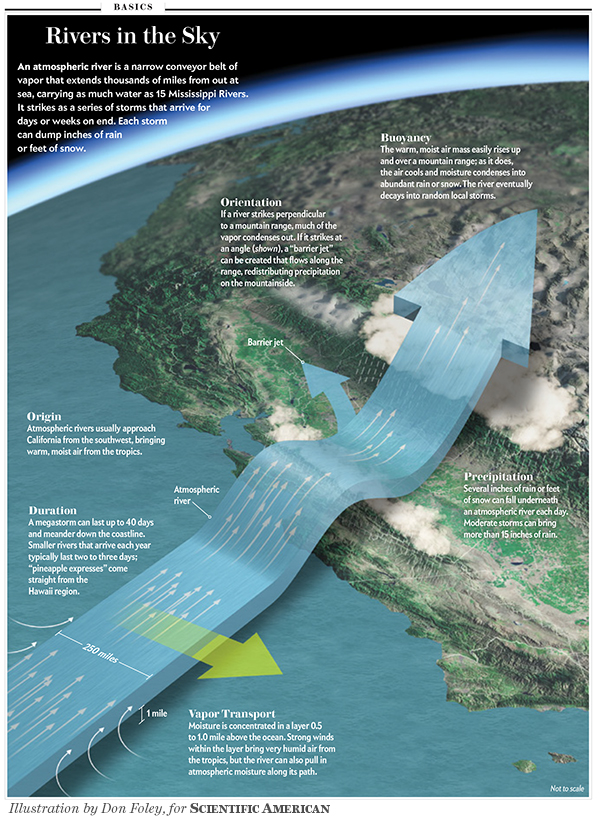 Several regions of central California have been frequent targets in the past two millennia. Here’s the record from core samples showing that every 200 years or so a catastrophic atmospheric river many times greater than any pineapple express occurs. 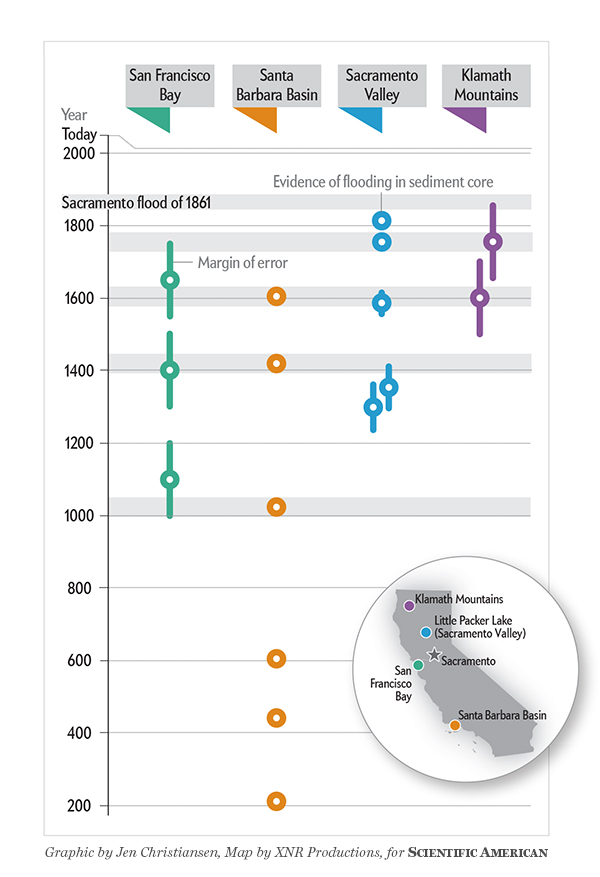 The flow pattern of the atmospheric river now battering the West Coast is classic. The University of Wisconsin at Madison maintains a terrific Web site that shows the flows in real time, updated every five minutes. A snapshot from last night is below. The dark red swath across the equator is the tropical rain band that is usually present; the atmospheric river is the sweeping jet of water vapor (blue in the image) that shoots off towards the U.S.

If you want to know more about these monster storms, check out the feature articleby Dettinger and Ingram. Dettinger will also be speaking at the American Geophysical Union annual conference in San Francisco next week. I’ll be there, too—with 22,000 scientists, right in the thick of the storms, should they continue.

Top image courtesy of the University of Wisconsin at Madison

Maybe those fluffy white clouds aren’t quite as innocent looking as one might imagine! Oh, and a cubic metre of water is one tonne! A 1,000 kgs! (Just a little short of a ton in old money.)

Finally, here in rural Southern Oregon, we received 1.70 inches of rain on Thursday and were grateful that it wasn’t more.  Nonetheless, it had the creek levels raised, as the following pictures reveal.