A highly fascinating glimpse of a lightning strike. 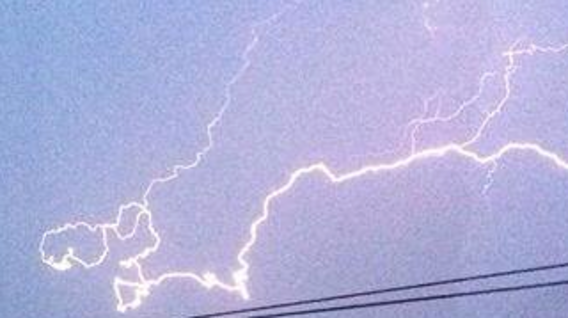 “This is a once in a lifetime photo”, says Arron McNally. “There will never be one like it again”. A few evenings ago, the Cornish father of five was watching a spectacular electrical storm with his wife Krista Oflynn from their daughter Kelly’s bedroom window.

No doubt to allay the four-year-old’s fear of the storm, mum and dad started a competition to see who could snap the most spectacular fork of lightning on camera. “When I caught this one I knew I was the winner”, Arron (26) says. Scrolling back to see the picture he had taken of a particularly bright strike nearby, he immediately recognised the outline: “It was exactly the same shape as Cornwall – it was as if someone drew a map of the county in the sky”.

The incident is related in the Plymouth Herald, which covers parts of Cornwall and Devon, in the southwest of England. The paper quotes unnamed ‘experts’ who claim this is “the first time on record that a place has been struck by lightning which looks like the area itself”. While that sounds suspiciously like that old trick in the journalist’s book – faking an ‘anonymous source’ to use an unverifiable quote you came up with yourself – it is true that the resemblance is uncanny.

Cornwall is England’s southwesternmost county, a wedge-shaped peninsula dividing the Celtic Sea to its west from the English Channel to its east. The peninsula’s tip is known as Land’s End. On the other side of the county, the River Tamar separates Cornwall from Devon, and the rest of England. Some would even say: from England proper – Cornwall, although officially English, has its own Celtic history, culture and language. Some locals promote the separate Cornish identity (reviving the virtually extinct Kernowek language – see also #13) and even strive for larger political autonomy. In April 2014, the Cornish were granted minority status under the European Framework Convention for the Protection of National Minorities.

The bolt of lightning photographed by Arron McNally mirrors the geography of Cornwall in a few crucial areas. The main streak at the bottom and the secondary one on top together suggest the wedge shape of the county. Two protrusions at bottom left of the fiery constellation resemble Land’s End, the neighbouring Lizard peninsula (Britain’s southernmost) and Mount’s Bay between them. In fact, the Lizard is suggested twice, by a second downward stab of lightning to the right; next, a hint of the gentler curve of Falmouth Bay. The fainter, northerly streak of lightning also shows a passing resemblance to the northern Cornish coastline, from St. Ives Bay to where the line fades. 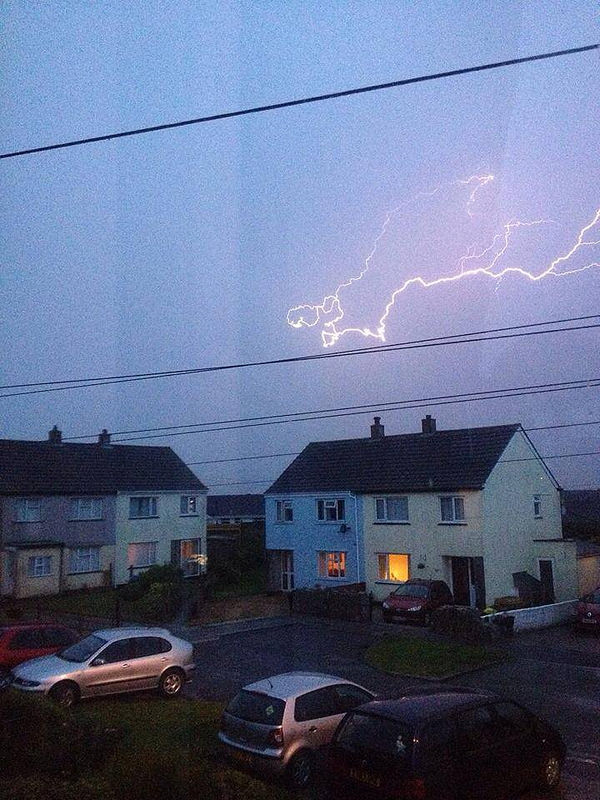 The ‘meteorologists’ quoted by the Herald may or may not be right in claiming that the Cornwall-shaped lightning is a ‘world first’ – how could you be sure of either? – this certainly isn’t the first time this blog has reported on weird territorial echoes.

Some time ago, this blog reported on a mysterious Nebraska-shaped field in Nebraska (see #426). And recently, we demonstrated how Belgium possesses a body double in one of its own provinces (see #659). But, most strangely of all: this is not the first time that Cornwall’s shapely contour has been shown to possess a curious double (see #555). And they say lightning never strikes twice…

Many thanks to Stijn Meuris for sending in this picture. Main info from this page at the Plymouth Herald. Bigger image of the lightning bolt taken here from the Jedi Council Forums.

You all have a great weekend and don’t stand out in the open if there’s a thunderstorm about!

13 thoughts on “Cornwall in lights!”