What we can learn about healthy lifestyles.

I am indebted to Schalk Cloete who has been leaving some very thoughtful comments on Learning from Dogs.  Schalk writes the blog, One in a Billion and more information about him can be learned here.  One of the very generous aspects of Schalk’s Blog is that his material is free from copyright, so I gratefully offer the following from his blog.

There are a number of very special traditional communities around the world that enjoy amazing health and longevity completely without the help of modern medicine. People still contribute actively to their communities in their 80′s and 90′s and often surpass the magical age of 100 sometimes without ever visiting a doctor.

The most well-documented of these communities is the Okinawa islands in Japan, but a number of other such communities also exist. These include the region of Abkhasia in the Soviet Union, the Symi island in Greece, the Italian village Campodimele, and the mountain communities of Hunza in Pakistan, Vilcabamba in Ecuador and Bama in China.

So, what are the secrets of these amazingly healthy people? Well, I don’t really think we can call them “secrets”, but here they are: these people simply eat a healthy, nutrient dense and predominately plant-based diet (Okinawan food pyramid given below), they never over-eat, they live very active lifestyles and they have a very strong sense of community.  Basically, they live the polar opposite of the modern western lifestyle. 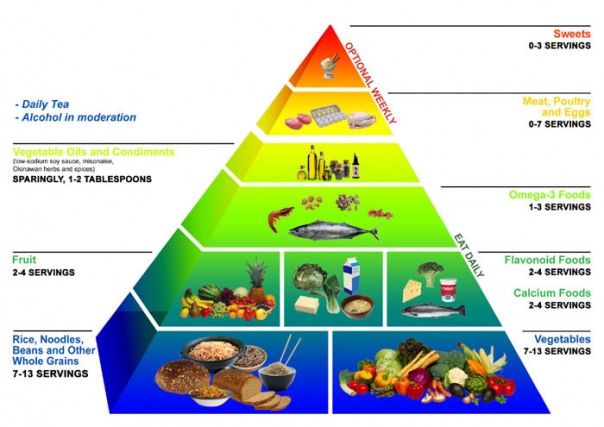 These healthy lifestyle choices have some pretty impressive results. One fun statistic about Okinawa is that they boast 15% of the world’s confirmed super-centenarians (those over 110) while having only 0.0002% of the worlds people, thereby giving them a concentration of super-elders close to 100,000 times greater than the rest of the world. Wow…

In John Robbins’ excellent book “Healthy at 100″, he discloses a lot of well documented research on Okinawa, stating that they are about 15% as likely to die of heart disease and cancer as Americans. They also live 5 years longer on average.

Unfortunately, the younger generation of Okinawans are rapidly screwing up these awesome stats by succombing to the American lifestyle brought by the US troops stationed on Okinawa.  It really is quite sad how many grandparents have to bury their grandchildren in Okinawa nowadays.

But this just shows how alluring our modern consumerist lifestyle really is. These young Okinawans saw the vibrant health of their parents and grandparents first hand, but still chose to consume their bodies into oblivion. Unthinking consumerism is indeed a very powerful enemy…

Fascinating article from Schalk, as I’m sure you will agree.

5 thoughts on “An insight into health”