Continuing from Part One last Friday.

Last Friday I started re-publishing the wonderful comments that had appeared on Climate Sight in response to a question that I had raised, namely,

“While in every way that I can think of, I support the premise of mankind affecting global climate, I would love to hear from someone who could reconcile the Post above with these recent items:” and then included the links to the WSJ and Daily Mail items.

If you are not familiar with those WSJ and Daily Mail items, then you will need to go back to Friday’s Post.

The third response was from chrisd3, here’s what he wrote,

Paul, here is the Met Office’s response, which begins, “[The Daily Mail] article includes numerous errors in the reporting of published peer reviewed science undertaken by the Met Office Hadley Centre and for Mr. Rose to suggest that the latest global temperatures available show no warming in the last 15 years is entirely misleading.”

And NASA never said anything about the Thames freezing over. Rose just made that bit up.

Finally, here is a chart of global temps from HadCRU:

From this, it is pretty clear why Rose chooses 15 years as his starting point: 1997-1998 was the time of the largest El Nino ever recorded, resulting in a huge temperature spike. Using that as the starting point for a temperature comparison is absolutely classic cherry-picking.

And in any event, you can’t say anything about trends in noisy data by simply comparing two arbitrary points. That is not a valid way to analyze the data (especially if you pick an obvious outlier as your starting point!). It is like trying to say whether the tide is coming in or going out by looking at the height of two waves. It just doesn’t work that way. You have to look at the long-term trend to remove the noise.

Let me take you to that Met Office response (and I’m republishing it in full).

Today the Mail on Sunday published a story written by David Rose entitled “Forget global warming – it’s Cycle 25 we need to worry about”.

This article includes numerous errors in the reporting of published peer reviewed science undertaken by the Met Office Hadley Centre and for Mr. Rose to suggest that the latest global temperatures available show no warming in the last 15 years is entirely misleading.

Despite the Met Office having spoken to David Rose ahead of the publication of the story, he has chosen to not fully include the answers we gave him to questions around decadal projections produced by the Met Office or his belief that we have seen no warming since 1997.

For clarity I have included our full response to David Rose below:A spokesman for the Met Office said: “The ten year projection remains groundbreaking science. The complete period for the original projection is not over yet and these projections are regularly updated to take account of the most recent data.

“The projections are probabilistic in nature, and no individual forecast should be taken in isolation. Instead, several decades of data will be needed to assess the robustness of the projections.

“However, what is absolutely clear is that we have continued to see a trend of warming, with the decade of 2000-2009 being clearly the warmest in the instrumental record going back to 1850. Depending on which temperature records you use, 2010 was the warmest year on record  for NOAA NCDC and NASA GISS, and the second warmest on record in HadCRUT3.” 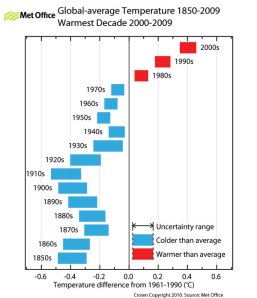 Furthermore despite criticism of a paper published by the Met Office he chose not to ask us to respond to his misconceptions. The study in question, supported by many others, provides an insight into the sensitivity of our climate to changes in the output of the sun.

It confirmed that although solar output is likely to reduce over the next 90 years this will not substantially delay expected increases in global temperatures caused by greenhouse gases. The study found that the expected decrease in solar activity would only most likely cause a reduction in global temperatures of 0.08 °C. This compares to an expected warming of about 2.5 °C over the same period due to greenhouse gases (according to the IPCC’s B2 scenario for greenhouse gas emissions that does not involve efforts to mitigate emissions).  In addition the study also showed that if solar output reduced below that seen in the Maunder Minimum – a period between 1645 and 1715 when solar activity was at its lowest observed level – the global temperature reduction would be 0.13C.

Back to that response from chrisd3.  He offered this, “Finally, here is a chart of global temps from HadCRU.”  Here is that chart, remember we are looking at Global temperatures.

OK, between this Post and my Post last Friday, you probably get the message!  There were many other contributions and I could go on and on quoting the great responses I got, all of them uniformly saying there IS global warming unprecedented in recent years.  The message is crystal clear and those who wish to deny the evidence … well, I can’t come up with a polite term, so will just leave it at that!

My final contribution is from Martin Lack, author of the Blog Lack of Environment, and a good friend of Learning from Dogs.  Here is what he wrote in a recent email,

You may have seen my latest response to How much is most?

When I eventually saw your earlier comment, I was surprised and disappointed in equal measure because I almost feel that I have failed in some way. Let me explain:  Unlike ClimateSight and SkepticalScience, which both do an excellent job of focusing on the science of climate change, my blog is deliberately focused on the politics underlying the denial of all environmental our problems; including 2 key aspects to my MA dissertation, namely the political misuse of scepticism; and the psychology of denial.  See my How to be a Climate Change ‘Sceptic’  for more detail.

Therefore, although not specifically categorised as such, just about everything I have posted is traceable back to Paul and Anne Ehrlich’sBetrayal of Science and Reason (1996) and/or Naomi Oreskes and Erik Conway’s Merchants of Doubt (2010).  For someone who does not currently go to any Church, I am remarkably fond of quoting Scripture so, if necessary, please forgive me but, as the Good Book says:  “What has been will be again, what has been done will be done again; there is nothing new under the sun” (Ecclesiastes 1:9).

Therefore, I do not think you should be surprised by the amount of misinformation and misrepresentation contained in the original WSJ Sixteen’s article; and/or the fact that denialist arguments are repeated no matter how many times they have been shown to be false.  Furthermore, I would warn against trying to summarise it all on Learning from Dogs.  This is definitely Book territory and, in addition to the two mentioned above, the market is already saturated by the likes of Climate Change Cover-up by James Hoggan and Climate Change Denial by Haydn Washington and John Cook.

With very best wishes for a fog-free future,

What to say to close these two Posts off?  Frankly, it’s difficult to know how to pitch it.  The science seems clear beyond reasonable doubt.  But if you are reading this and disagree, then PLEASE offer the science to refute the conclusions presented here.  I promise you that I will present it on Learning from Dogs.

So let me end with a simple photograph.

This is the photograph that wilderness photographer Galen Rowell called, “the most influential environmental photograph ever taken.”

The now world-famous photograph was taken by Astronaut William Anders from Apollo 8, the first manned mission to the Moon, a little over 43 years ago on December 24th, 1968.

As the Earth rose above the horizon of the moon, NASA astronaut Frank Borman uttered the words, “Oh my God! Look at that picture over there! Here’s the Earth coming up. Wow, is that pretty.”  Bill Anders then took the ‘unscheduled’ photograph.

Now project forward 43 years to the year 2055 and play with the idea of what ‘pretty‘ planet Earth will be like for mankind and so many other species, including our longest companion, the dog, if we don’t get our act together pretty soon!