I have previously written about the madness of this proposed project, in fact have written six or seven times before.  You may like to dip back into this Post.  This one, too, shows starkly how our relationship with oil is changing the world we live in.

So it is with some sadness that I reproduce in full a recent circulation from Duncan Meisel from 350.org.

I’m writing to share some disappointing news: yesterday, the U.S. House of Representatives voted in favor of rushing approval of the Keystone XL oil pipeline.

This doesn’t mean the pipeline is getting built — not by a long shot. The bill would still have to pass the Senate and be signed by the President, neither of which are likely to happen. It does show that we need to be vigilant after our temporary victory to stop Keystone XL — the corporate polluters pushing this climate disaster never sleep.

Since we blocked the front door, Big Oil is now trying to bring Keystone in through the back — their representatives in Congress are attaching the pipeline as an amendment to a crucial bill about taxes and the economy. If we want to make sure the pipeline never gets built, once again we need to get loud and bring this fight back into the public.

Here’s the truth: much of our Congress is bought and sold by corporations. The 234 members of the House who supported this bill took $42,374,100 from corporate polluters in the last decade. If we want Congress to start working for us, and for the planet, we need to call them out on this corruption whenever it happens.

Can you share this image (with a quote from Bill McKibben) on Facebook or Twitter to show just how much this corrupt attempt to revive the pipeline stinks? 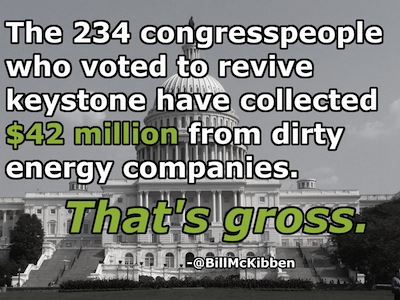 We’ll never have the money and the lobbyists of Big Oil, so we’ve got to use our voices and our bodies to make our point.

Over the past six months, we’ve signed petitions, led actions in communities coast-to-coast, and organized large-scale civil disobedience against this pipeline. All that work added up. President Obama’s announcement about the pipeline delay was HUGE, and gave us the chance to shut Keystone XL down for good.

Ultimately, we’re in a long term fight to save the planet from the polluters who would buy their way to total catastrophe. It’s up to us to use this moment to show just how dangerous they have become, and begin making the case that corporate control over government must end. Let’s make sure all of our friends know how much their latest Keystone XL stunt stinks.

Many thanks for raising your voice,

Duncan Meisel, for the 350.org team

P.S. In case you were wondering, we’re not only spreading the word online — folks in certain states are calling their senators and we’re continuing to ratchet up our actions across the country. As I type this, activists in Ohio are staging a “human oil spill” to House Speaker Boehner’s front door. We’ll need all sorts of creative tactics on the road ahead — more on that in a future email!

Please do everything to spread this message.  Thank you.

Finally, go and put your arms around your dog, give him or her a very big hug, and pray that mankind might learn something about truth and integrity from the humble dog!