Tom came to Learning from Dogs a short while ago and signed up to follow the blog. As is usual, I went across to his blog in order to leave a thank-you note. I was flabbergasted at what I saw. Tom and his two dogs were walking across Spain. He called his blog Chica’s Challenge and this is what he wrote on his home page.

First, Tom decided he wanted to do a long walk.
Then he thought Spain would be nice as it has to be in winter.
And he’d like to take Chica, our podenco.
As an afterthought, he said, “Maybe we could raise some money?”
“Who for?” I asked.
“Well, as I’m taking Chica and it’s in Spain, I guess for Spanish podencos.”
“Great idea! I’ll write the blog!”

I wanted to follow his posts and did so.

Then I wanted to republish a post and asked Tom if I had his permission to so do.

“Of course”, came the reply.

So I am going to republish the post that was Day 7 of the walk.

One dog and her man walking across Spain, raising money for their podenco friends. 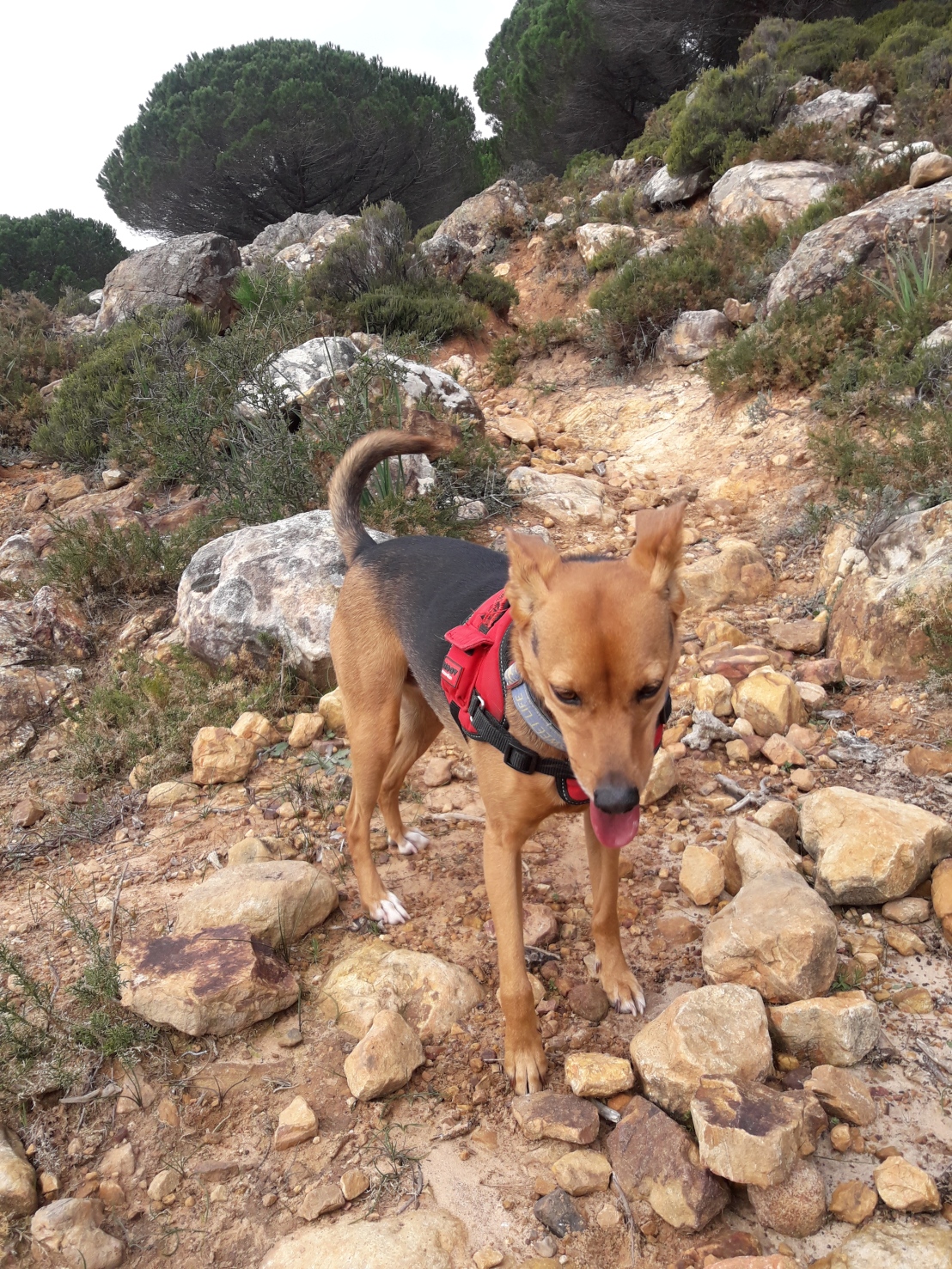 The last two days were non-walking days, one for bad weather and another to move base again. Now we have the luxury of being in a house for a while in Jimera de Libar, a village we know well. 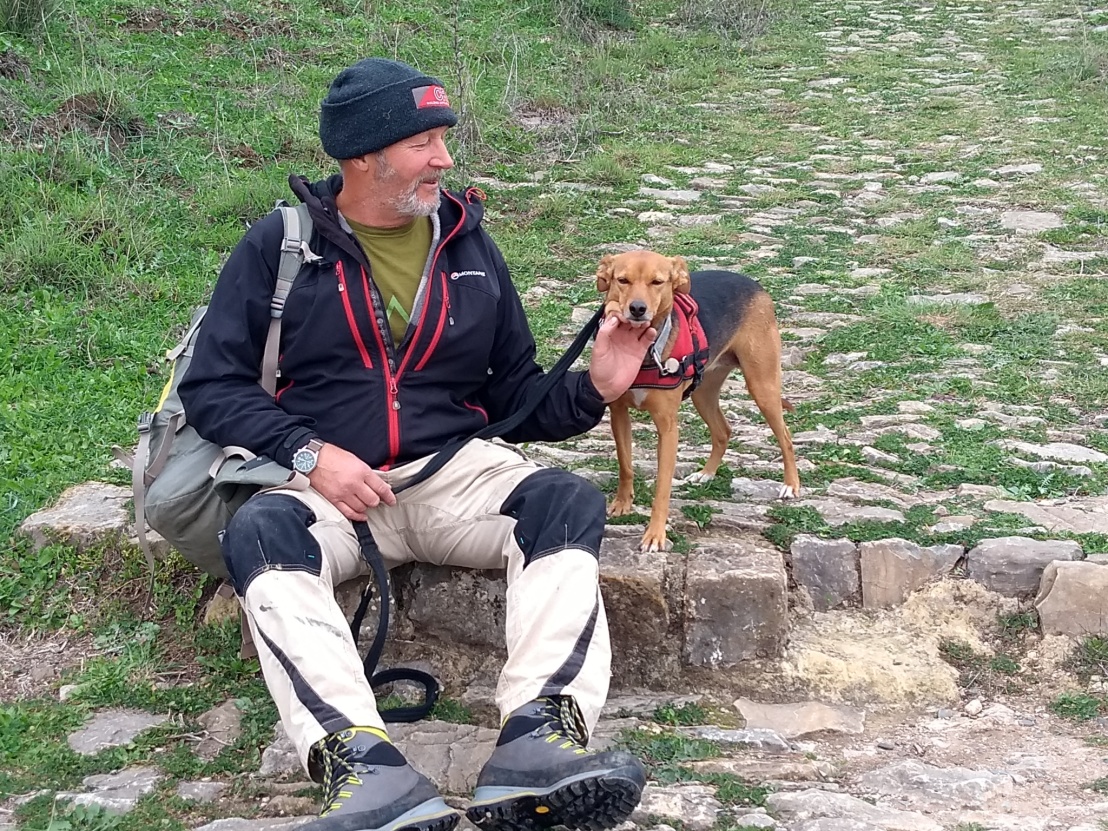 So the day started with the drive back to Jimena and the weather looked reasonable. Again, Merlin refused to be left so the three of them set off up the path, climbing steadily for the first hour and a half. 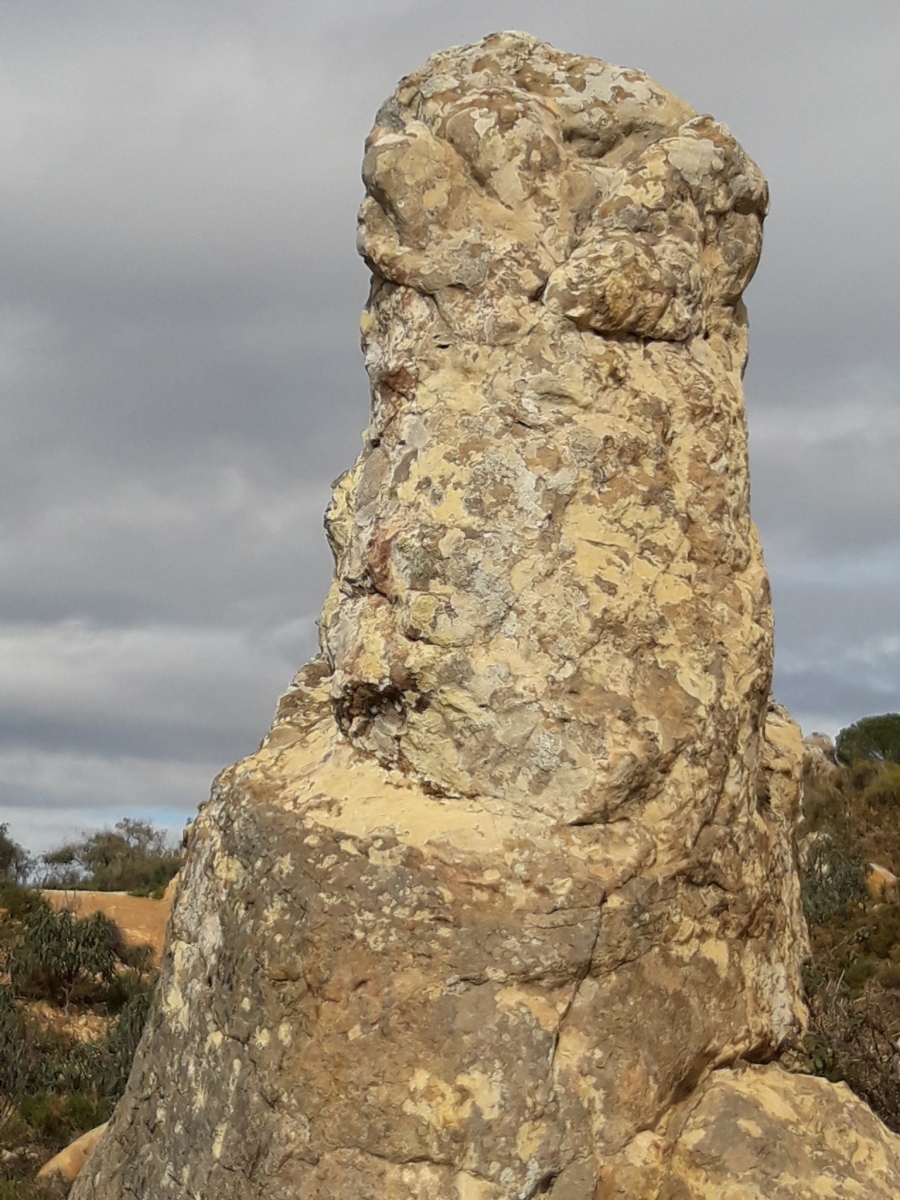 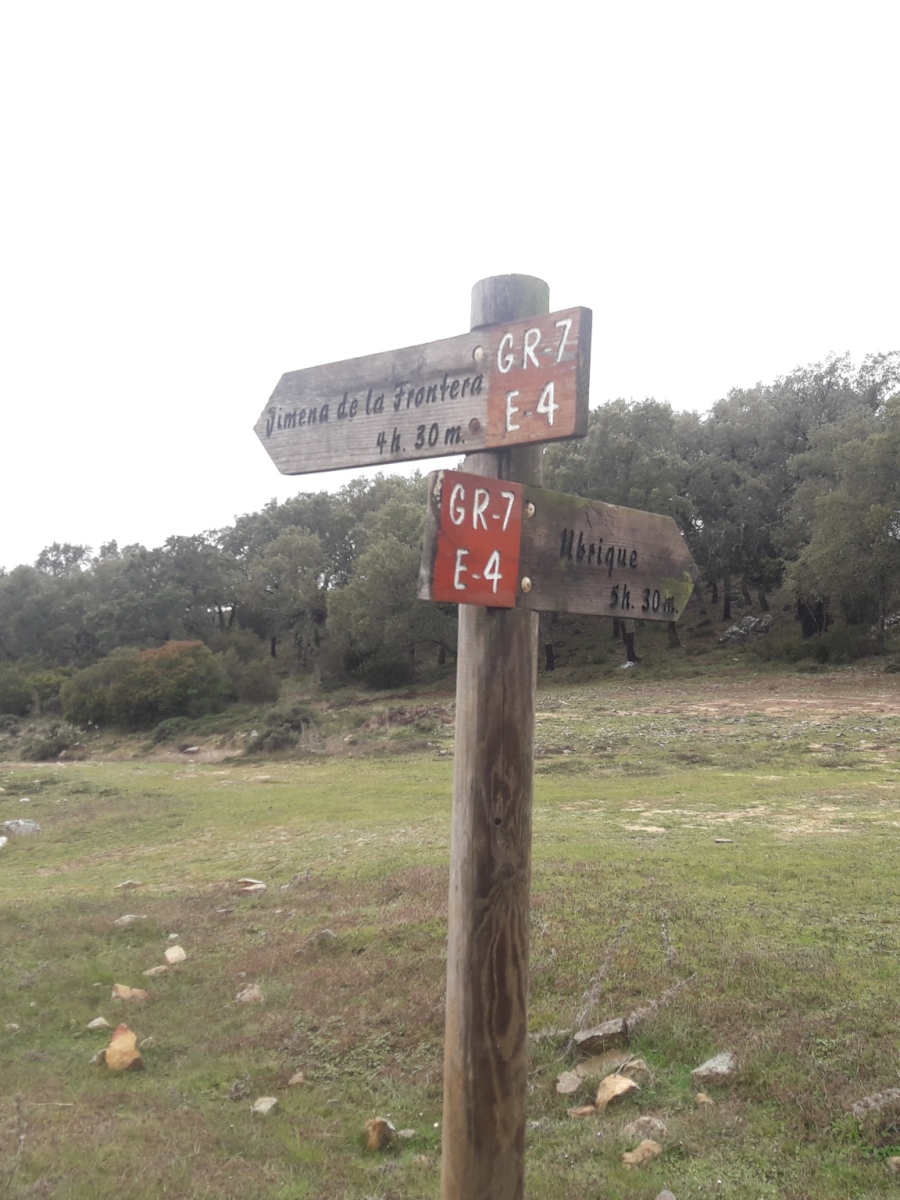 The path eventually levelled out and passed beneath the rocky outcrops of the Altos de Paneron and Cerro de Marin. After a bare rocky sections where the route was harder to determine, they went into dense forest of oak and Spanish fir (we love these and call them lollipop trees because of their shape). Both dogs in great form, but Tom was mean and moody :). 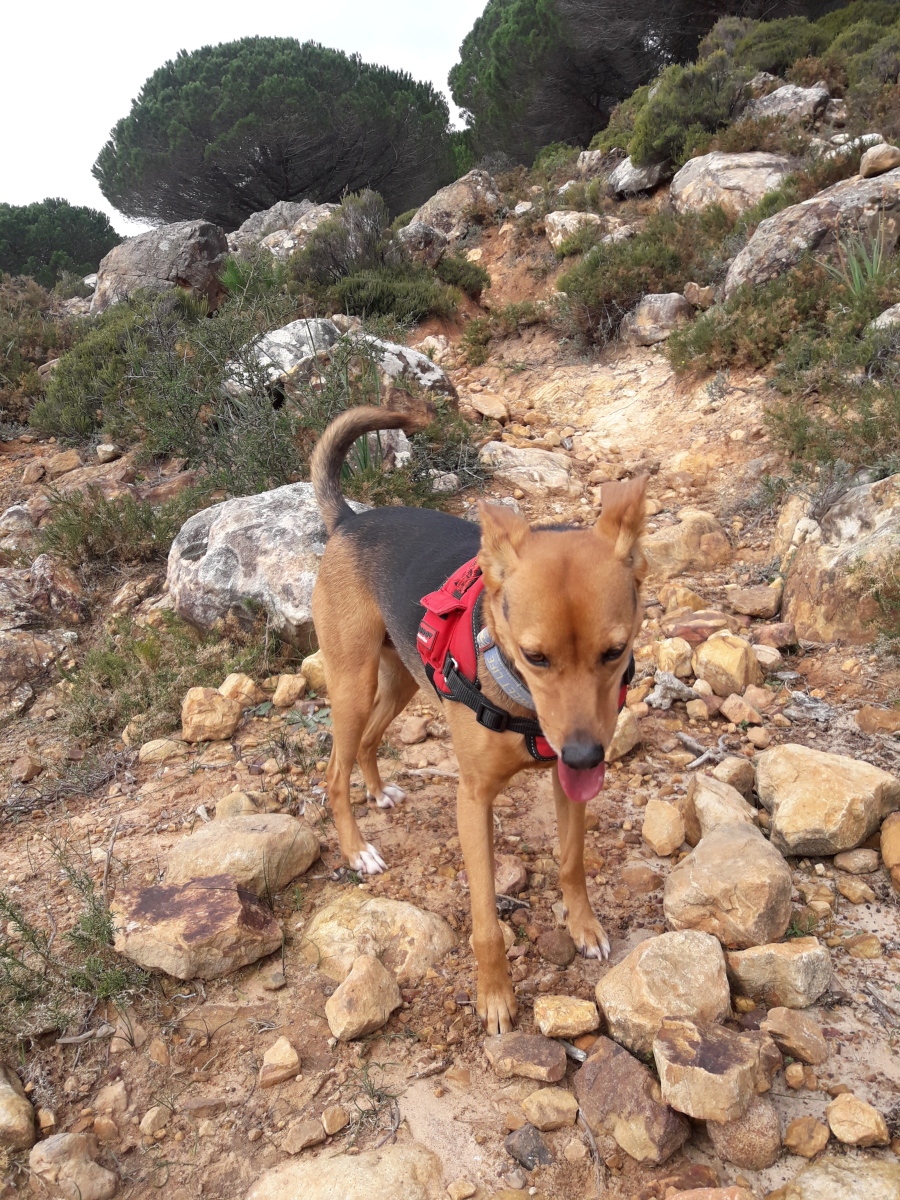 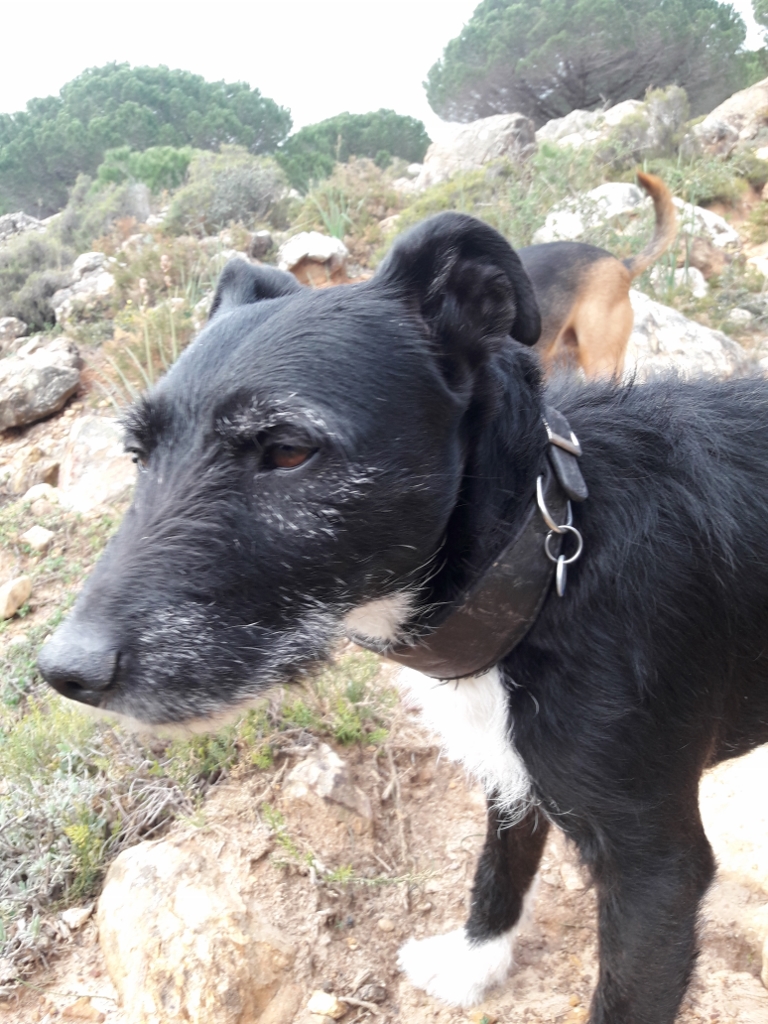 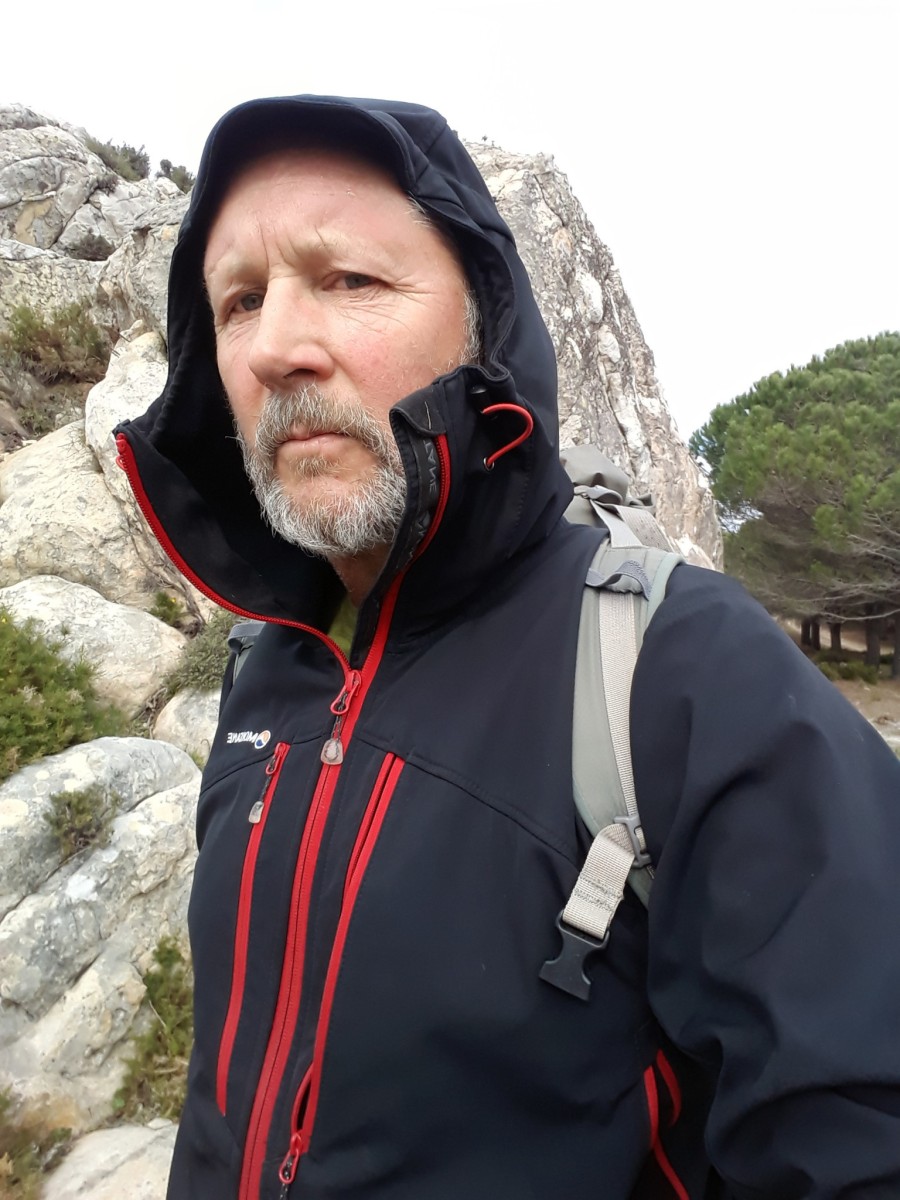 Dark clouds were gathering from all directions but the view to the coast was still impressive. However, it wasn’t long before the rain began and the temperature dropped.

Fortunately the rest of the route was on a well-defined and signposted track, winding down through the cork oaks in the midst of the Los Alcornacales. It was here deep in the forest that I eventually picked them up. I had forgotten that smaller Spanish roads aren’t always roads as I know them and the last five and a half miles I was driving along a rough track with no mobile signal, not at all sure I was in the right place. Even though we have a 4×4, I made very slow progress and it was with considerable relief that I found them, damp but completely unconcerned.

In the original some of the photographs were side-by-side but in copying them across I chose to enlarge them.

The start of Tom’s walk may be seen here and I thoroughly recommend that you read it in full.