A stray dog rescue story, from a beach in Greece to home in the United Kingdom.

So many times this world of blogging creates special connections.

Just a few days ago there was an email, automatically generated by WordPress, to inform me that there had been a new subscriber, or follower, of Learning from Dogs. As I always do if that new subscriber has, in turn, their own blog-site, I go across to their place and leave a ‘thank you’ note.

In this recent case the blog-site that I went to was one under the title of Loving Luna. If you go to that home page you will read this:

Hey! My name is Charlotte Hargreaves.

On 11th June 2018, my partner Oliver and I arrived in Halkidiki, Greece for our third holiday together.

With Oliver recently starting a new job as a Sales Executive and myself finishing University two weeks prior, we were more than ready for the ten day break!

The trip started out like any other – sand, sea, sun, tequila. However on Monday 18th June, just three days before we were scheduled to depart back home, we came across a stray who was to steal our hearts and set us off on a wild adventure to #bringLunahome.

This is her story.

Charlotte has very kindly given me permission to republish her four posts that go into the details of getting Luna back to England.

Here is her first one.

We first spotted Luna on the private beach of our hotel. Dehydrated and drained, she appeared out of nowhere and desperately tried to wriggle her body underneath the occupied sun lounger in front of us, for shade from the blistering mid-day sun. Her eyes rolled in the back of her head, half-closed and she panted heavily, her tongue lolling clumsily to one side. Oliver fetched some water and she lapped it quickly from the cup. In return, she was incredibly affectionate and offered strokes and belly rubs in between sips, her loving nature at the forefront of her character.

After a short while, she ventured to a vacant sun lounger and fell asleep underneath its accompanying parasol. When the sun lounger behind this one also became vacant, we quickly moved to observe her more closely. For a stray dog, we were taken aback by how gentle and friendly she was. She took slices of ham which we had salvaged from the all inclusive sandwiches so delicately and always with that wagging tail. Some she ate, some she buried, demonstrating that deeply engrained survival instinct. It broke our hearts. We knew we had fallen in love and never wanted her to have to plan for her next meal again. 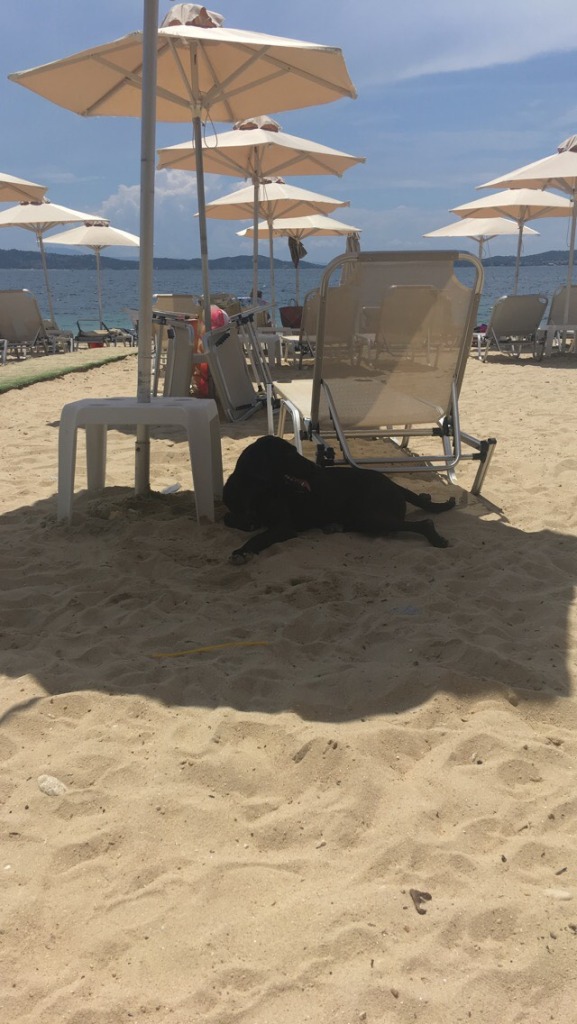 She remained on the beach for the most part of the day before retreating up the mountain and out of sight. After speaking to some of the locals, two things became clear. Firstly, we learned that she had a wide roaming ground, from the beach to the top of the mountains, from Ouranoupolis town right down to the opposite end of the main road. In total, she most likely covered a distance of 5-10km per day, sparking a fear in us that with only three days left in Halkidiki, we might never see her again. Secondly, and most notably, we learnt that Luna was loved. Rather than scavenging dustbins, her main tactic for acquiring food seemed to be earning it from tourists through her approachability. As a result, the locals said many people across the Island knew Luna and recognised her as she her passed through.

Back home in the United Kingdom, my family has always owned and loved dogs.  At the moment, we have a Schipperke called Koko and three Lhasa Apso’s, Jussy, Lucy and Phoebe, who live with my Nan across the road. We also regularly dog-sit for two cheeky Staffie’s called Boss and Jet. 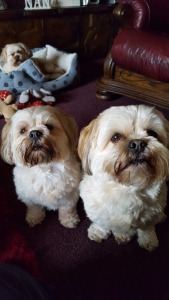 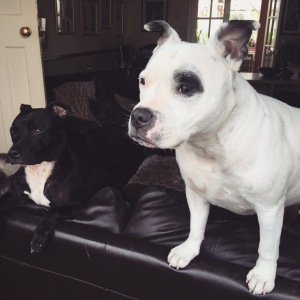 When I retold Luna’s tale to them, they were incredibly supportive and this motivated me to reach out to several charities including PAWS (Pelion Animal Welfare Society). PAWS contacted us with wonderful news – there was a lady called Olga in Thessaloniki who would take Luna in her boarding kennels, Better Dogs. Olga could assist with arranging the necessary veterinary procedures for travel including micro-chipping, anti-rabies injection, de-worming and acquiring a pet passport. After that, PAWS informed us, they had a place for Luna on their next ferry trip to the UK, scheduled to arrive in Maidstone, Kent on Saturday 14th July.                                                        Suddenly, things became very real.
Could we actually be bringing this little dog home? Could we pull this all together just three days before our departure?

We set to work like two mad men, the bed covered with scribbled notes, plans of actions, contact numbers and (premature, I know) …suggestions for names. We were attached, well and truly. But pivotally, it had become doable. This crazy idea now had structure, logisitics, possibility! We knew there would be costs, extensive planning required and still a hell of a lot of uncertainty but PAWS had made this dream transition into a reality. It was then we decided… she was coming home.

That night, England was playing their first World Cup match and the hotel bar was filled to brim. I sat amongst the crowd with my phone in hand, anxiously awaiting my first call with Olga. At 9:24pm, it rang. One of the first things she said to me was, ‘Charlotte, I am going to help you and your dog’ and the relief that we were not alone in this came flooding in. People wanted to help. My family were behind us, PAWS were behind us and now Olga was behind us. I wondered if this pup had any idea of the support she was rallying and the love she was already spreading.

It was beginning to grow dark and conscious that we hadn’t seen Luna in a few hours, our hearts began to ache for her. By this point, news had spread through the hotel of our quest and opinions of us were divided between those idiotic, soppy Brits or genuinely, good-hearted people. I like to think the latter. Suddenly, in the midst of the game and, ironically, whilst I was continuing to jot down ideas for names, a lady hurried through the crowd towards us, gesturing and calling ‘She’s here! She’s in the hotel!’. Oliver and I darted from our seats but unfortunately when we came to the place where she had been spotted, she had vanished. Her coat acting as a perfect camouflage against the night. Disheartened, and with a feeling that she was somehow mocking us, we returned to the game.

The employees of the hotel had told us that she was often seen at the very top of the complex, close to the employee housing and so I felt more hopeful when the whistle blew and we headed up the hill, desperate to catch another glimpse of her. By some stroke of luck, we turned the corner and saw a young couple petting a small, black silhouette. We dashed over, probably giving them a fright as we fell about the floor, stroking her and telling her how beautiful she was and how we’d missed her. To avoid coming off as completely crazy, we explained the story to the couple who seemed amazed and it began to sink in that what we were doing was something very out of the ordinary but something very special. All the while, she lay on her back in the undergrowth, letting Oliver rub her belly, play with her ears, and scratch her nose, content to be part of the action-filled plot.

We attempted to lure her to our apartment with leftover takeaway, wanting her to be comfortable and familiar with the surroundings. If we were to transport her to Olga’s, she would need to spend the night in the apartment for we couldn’t risk not being able to track her on the day of the trip. She was as playful as ever but metres from the front door, her skittishness took a hold of her and uncertain, she trotted away into the darkness. An old adage rang in my head that you should never chase a stray and so we retreated to our apartment balcony and talked about how we were going to make it work, how badly we wanted her and to psychologically assess ourselves…just to confirm that we were not actually just a pair of idiotic, soppy Brits.

An hour or so passed when all of a sudden, as if she had overheard, a little black shadow appeared below our balcony with its signature head tilt and inquisitive ears. Like two rabbits caught in the headlights, we were dared not breathe, partly to avoid scaring her off and also to discourage unwanted attention. ‘Where’ve you been girl?’, we began to call to her in hushed tones. Her tail began to wag continuously until pitifully, she began to cry, unable to work out how she could reach us. Like a bullet, Oliver was out the door, round to the front and straight into her affections. A few minutes later, she climbed the mounted verge directly underneath our balcony, out of sight and laid down for the night. We wished her goodnight and returned to the apartment. Knowing that she recognised our voices in the darkness, that she was excited to see us and that she felt safe enough to sleep directly below us filled our hearts with hope and we felt positive about what the next day would bring.

On a side note, we would like to thank everyone who may appear in this article unnamed. Whether you alerted us to her whereabouts or told us we weren’t crazy….we three are so grateful for your time, support and belief in us.

*I will be writing a separate blog on both Better Dogs and PAWS and the incredible work they do. For more information in the meantime you can visit their websites below:

The second episode will be republished tomorrow!

36 thoughts on “A story of a loving rescue”

Click here to leave a goodbye message
Join 4,275 other followers