The last two weeks predominantly have been posts under the umbrella of WordPress’ Writing 101 event. I’m bowing out at the half-way point.

Simply because the arrival of Pedy and the huge pleasure that Jean and I have had from rescuing him meant I wanted to return to writing most of the time about dogs and what we humans can learn from them.

So with that in mind it has been widely reported in recent days about the news that we humans bond with dogs as we do with babies. Let me quote a little from a recent article from the BBC.

Gazing into a dog’s eyes can stimulate the same bonding process that occurs between mother and child.

Eye contact between a mother and her baby strengthens their attachment by activating the so-called ‘love hormone’ – oxytocin – in the mother’s brain.

This drives emotional bonding between parent and offspring by encouraging both nurturing and interactive behaviours.

Studies have shown that stroking or making eye contact with a dog can trigger a similar release of oxytocin in a human’s brain.

Now a team of Japanese scientists have found that the “mutual gaze” between dogs and their owners can lead to a bond that is similar to that between a mother and child, with humans experiencing the same feelings of affection for their dogs as they might do for their family, therefore helping to bring the species closer.

The findings are reported in the journal Science and also note that wolves do not show the same response. Authors suggest this means that the bonding process probably co-evolved in both species as dogs became domesticated.

“It can be said that dogs successfully cohabit with humans because they have been successful in adapting the bonding mechanism to relations with humans,” said lead author Dr Miho Nagasawa, from the School of Veterinary Medicine, Azabu University, Japan.

Do read the rest of the article here.

All of which serves as a wonderful foreword to how the stray dogs manage so successfully to exist on the Moscow subway. I reported on this back in 2011 under the title of The Tenacity of Dogs but immediate neighbours Larry and Janell sent me a link to a much more detailed account of these subway dogs. Here is the remarkable story.

The Life of Subway Dogs

To those of you who own dogs or like them, this should be interesting.

The elite of Moscow’s 35,000 stray dogs are about 500 Russian dogs constantly living in the Moscow subway (Metro). About 50 of subway dogs have learned to ride the trains, commuting from quiet suburbs stations where they spend the night to downtown where it’s easier to get some food.

Each morning, like clockwork, they board the subway, off to begin their daily routine amidst the hustle and bustle of the city. But these aren’t just any daily commuters. These are stray dogs who live in the outskirts of Moscow Russia and commute on the underground trains to and from the city centre in search of food scraps.

Then after a hard day scavenging and begging on the streets, they hop back on the train and return to the suburbs where they spend the night.

Living in the subway is just a survival tactic the Moscow stray dogs have come up with. The subway dogs have figured out how to use the city’s huge and complicated subway system, getting on and off at the stops they need. They recognize the desired station by smell, by recorded announcer’s voice, and by time intervals basing on their biological clocks. Usually they ride first or last car to keep away from crushes. 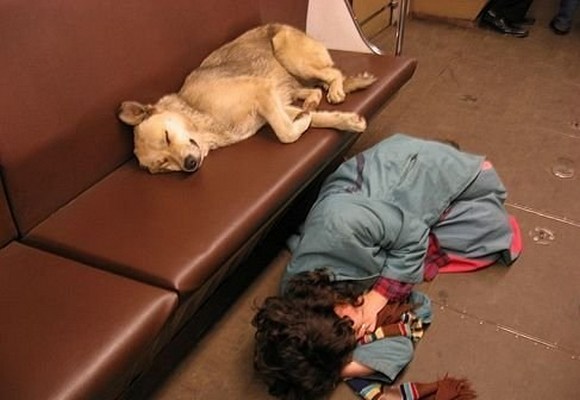 Experts studying the dogs, who usually choose the quietest carriages at the front and back of the train, say they even work together to make sure they get off at the right stop – after learning to judge the length of time they need to spend on the train.

In Soviet times stray dogs were barred from subway. Moscow Metro’s passengers are so accustomed to dogs on subway – sleeping on empty seats and hanging around stations – that they do not pay any attention. 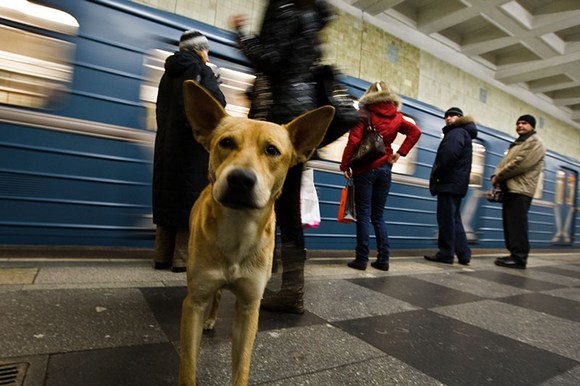 For these strays the Moscow Metro is their home. The subway dogs get outside to do all their deeds and behave friendly to the passengers. They have very good instincts about people, greeting happily kind passengers and avoiding contacts with intolerant persons. And they always find somebody who will share food with them. 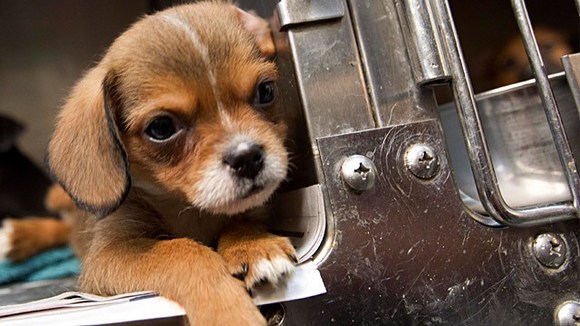 With children the dogs “play cute” by putting their heads on youngsters’ knees and staring pleadingly into their eyes to win sympathy – and scraps.

Dogs are opportunistic and intelligent, and when they figured out they were no longer chased away from the subway stations, they began hopping trains for a lift into the city. The Moscow subway system is a maze that can be confusing for people, but the dogs appear to have learned the system.

Once in the city, the dogs have their own special ways of getting food. Some position themselves outside butcher shops and wait for dog lovers coming out of the shop to toss them a bone. Others have refined a technique of sneaking up behind people who are eating food and surprising them with a loud bark which hopefully scares the person into dropping whatever they’re eating. If the dog is successful in getting the person to drop their food, he grabs his prize and runs.

Packs of stray dogs are led not by the strongest or most dominant member, but by the most intelligent dog in the pack. The dogs understand living among people in a large city requires brains and not muscle to survive. Researchers have observed dog packs selecting pack members that are smaller and cuter than the other ones who are then sent out to beg for food. 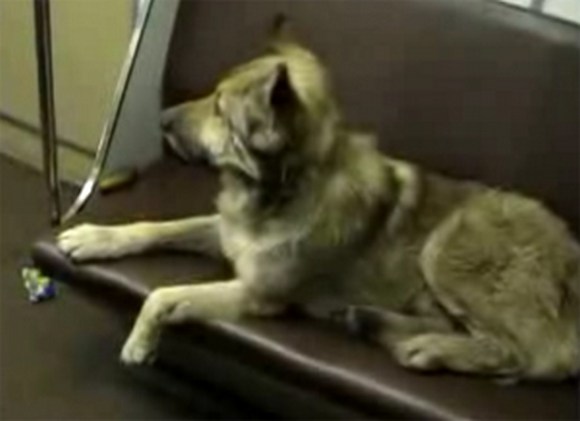 The dogs also don’t leave messes laying around where someone can step in them, and they relieve themselves in out of the way spots away from the main traffic areas. The subway riding stray dogs of Moscow have essentially learned how to interact with people and move among them in order to survive. 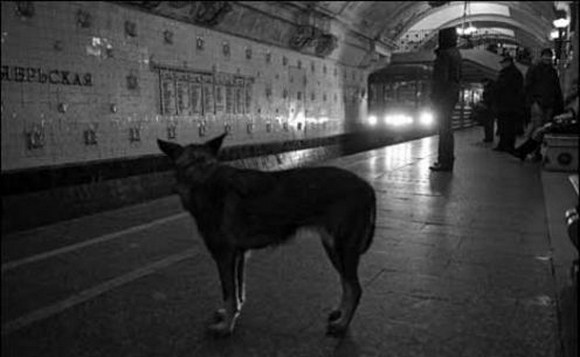 Aren’t dogs the most remarkable species of animal!

14 thoughts on “Admiration for lost souls!”