Margaret from Tasmania sent me the following remarkable photograph. 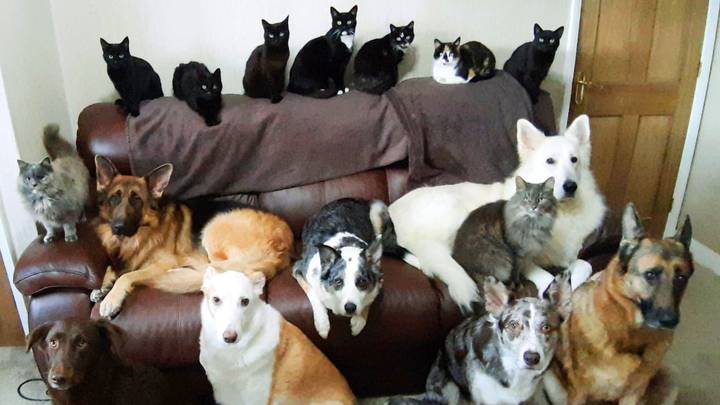 A woman has achieved the ultimate feat for any pet owner, having managed to get not just one of her animals to pose nicely for a photo, but all 17 of them.

Kathy Smith, 30, is the proud owner of eight dogs and nine cats, who she somehow wrangled into an incredible family paw-trait.

Mind you, the accomplishment didn’t easy, as Kathy spent two weeks trying to get the perfect shot. That’s right, a FORTNIGHT – I guess they do always tell you never to work with animals; now I can see why.

It turns out the dogs were up for the challenge and sat quietly for the camera, but it was getting the cats involved that proved to be more difficult. Like trying to herd… well, cats.

Then came the moggies, a process that saw shop assistant Kathy dashing back and forth with her camera on standby, hauling the cats back into place several times.

Kathy eventually got them all into position and captured a split-second snap of the 17-strong pack before they scattered to return to their pressing everyday lives.

Kathy, from Corwen, Wales, said: “I was so thrilled when I I’d captured this shot – it’s like a little family photo.

“I love all of my pets so much so I was really happy when I managed to get them all posing together – despite it not being easy to do.

“I kept trying to get photos of the cats and dogs all together but some of them were always out of frame.

“The dogs will all sit for treats so that was easy enough, but the cats were another matter.

“I now know the real meaning behind herding cats – I had to just keep picking them up and putting them back until they stayed.
“It took about three attempts but in the I managed to keep them there for a couple of seconds and get the photo before they were off again.

“We live in quite a chaotic but you get used to it.”

Kathy, who rescues and cares for pets and other wildlife in need, said people are often surprised to see her giant four-legged family when they come to visit her in her three-bedroom semi-detached home.

Along with the nine cats, she also has four budgies, several fish and even a baby hedgehog in her care.

Kathy “People are usually shocked when they come over and realise how many pets we have, the house is but we’re used to it.

“They all run and you don’t there’s a lot of them until they’re in one room.”
Featured Image Credit: Kennedy News

One can easily get Jess’s background for it is on the same page:

Jess is a journalist at LADbible who graduated from Manchester University with a degree in Film Studies, English Language and Linguistics – indecisiveness at its finest, right there. She also works for FOODbible and its sister page Seitanists, which are both a safe haven for her to channel a love for homemade pasta, fennel and everything else in between. You can contact Jess at editorial@ladbible.com.

Brilliant! To be honest I don’t really know how Jess pulled it off!

22 thoughts on “What a wonderful photograph.”