An incident yesterday serves as an introduction to today’s post.

I decided to go down Azalea Drive to the end and return the same way; a total of 19.5 miles. 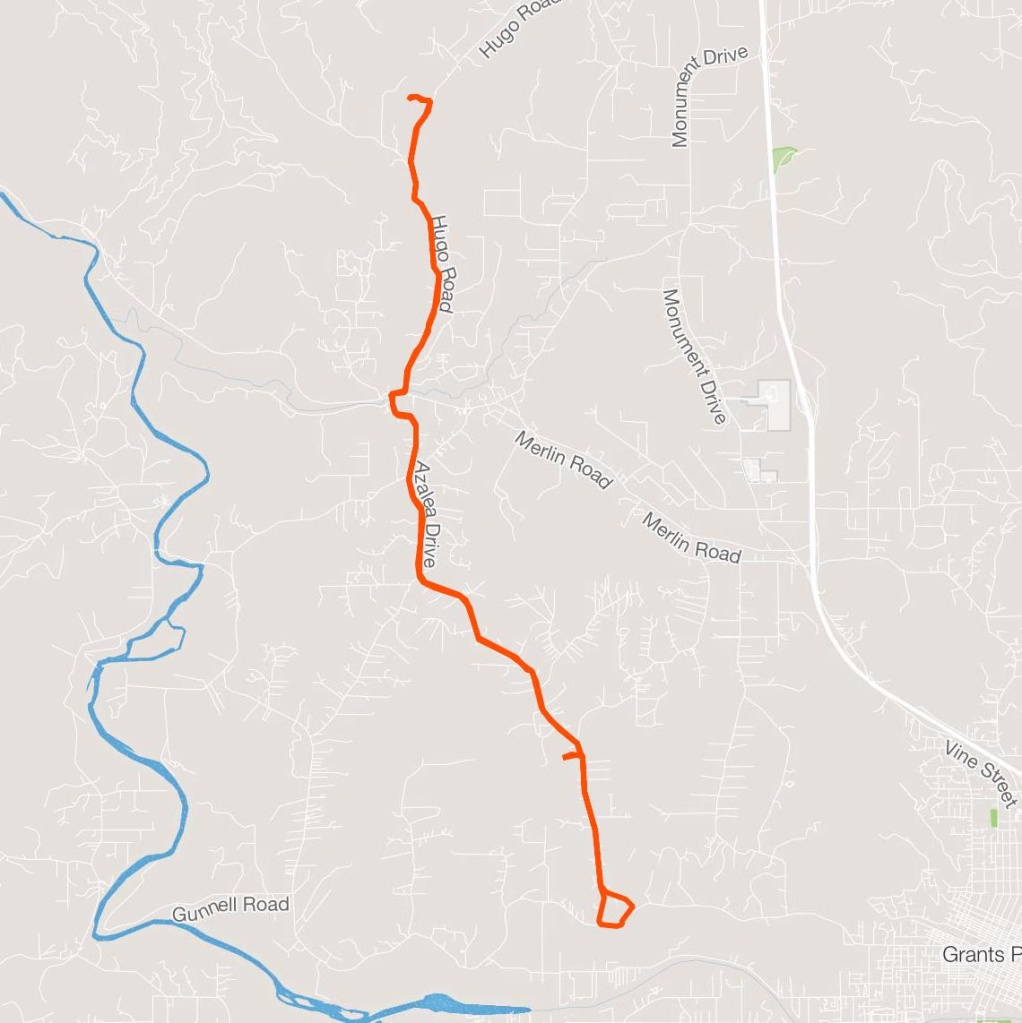 Now about 2 miles into my return I came across a dog playing in the road. Azalea Drive is a pretty busy road and as I approached the dog I had to wave down cars. Soon I was up to it and I noticed it wasn’t wearing a collar but it looked well-fed. It was incredibly friendly and came instantly up to me and allowed me to caress it around its head and ears. It was a black Labrador.

Now not wanting to leave it and the two gates alongside where I was, on the same right-hand side of the road, being padlocked shut I decided to walk a good half-mile down an opposite drive to find someone. I was pushing the bike in my righthand and the dog was walking very happily by my left leg. Eventually I got to the house and rang the bell. Pat and Earl came to the door; it wasn’t their dog as evidenced by the barking of their own dogs. Pat suggested trying the next house South. I left my bike there and Pat gave me a leash to walk the dog with.

So the dog and I walked back down the drive and up the next driveway South. I knocked on the front door.  Several people came to the door. It wasn’t their dog either but a young man kindly offered to take the dog and return it to the property where it lived across the road. Apparently it wasn’t the first time that this had happened; the owners worked all day and the dog had found a gap in the fence.

So I left the beautiful Lab with the young man, thanked him profusely and walked the three-quarters of a mile back to fetch my bike. Thinking that some people didn’t deserve such a beautiful dog!

Now to my post for the day, courtesy of The Dodo.

As a group of road workers were collecting trash along a highway in Dutchess County, New York, they suddenly heard barking. They were basically in the middle of nowhere, and couldn’t imagine why a dog would be wandering around there. Still, they knew they had to investigate, and so they followed the barking — and found a dog tied to a tree, deep in the woods away from the highway.

The workers were shocked to find the poor dog tied to the tree, away from where anyone could have spotted him, and he was just as shocked — and overjoyed — to see them too.

“He was very happy and excited to see anyone,” Lynne Meloccaro, executive director of the Dutchess County SPCA, told The Dodo. “He had been there for quite a while in 100-plus [degree] weather. He’s clearly got a strong will to live.”

After the New York State Police were contacted, the very excited dog was taken in by the Dutchess County SPCA, who decided to name him Pesci. The staffers there were dumbfounded by how anyone could have abandoned such a happy, upbeat dog. Even after everything he’d been through, he was so thrilled to meet all of his new friends, and didn’t seem to be scared of people one bit.

“He is a very sweet soul,” Meloccaro said. “He’s happiest when he’s with people — he loves to play and get cuddles.”

Besides being dehydrated, Pesci was surprisingly healthy. He’s now thriving in the care of all his new rescue friends, and simply can’t get enough of all the love and attention he suddenly has. The police are now actively investigating how he came to be abandoned, so they can hold whoever did it responsible.

“That he was so far off the road suggests that whoever put him there did not intend for him to be found easily,” Meloccaro said.

Luckily, Pesci is safe now and is already so loved, and the shelter has a feeling he won’t have to wait long before he’s adopted into the best forever home.

“He will be ready for adoption very soon, and given the public interest in this case, I think he will find his forever home in a shorter amount of time than he spent tied to that tree,” Meloccaro said.

The contrast between the dog I found, or rather the owners, and Dutchess County SPCA is stark!

As I said some people have no right to a loving dog.

Click here to leave a goodbye message
Join 4,288 other followers