The other day we went to buy more hay and feed from our local supplier The Red Barn on Upper River Road in Grants Pass.

Tyler, the owner, was distraught having just returned from urgently running his dog in to see Dr. Russ at local Lincoln Road Vet Clinic. The reason being that his dog had eaten some rat poison that he had put out on one of the upper floors of the barn.

Later I was discussing this with our good friend, Jim Goodbrod, also a Doctor of Veterinary Medicine (DVM), and Jim said that so long as the dog is caught quickly and taken to a vet it is unlikely that it would leave the dog with any permanent harm. 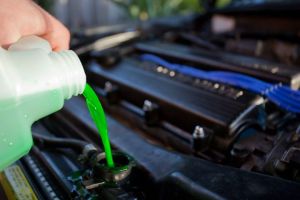 However, Jim then went on to say that especially at this time of the year the thing that vets see far too often is dogs who have drunk antifreeze that car owners put into their radiators ahead of the winter season.

Jim stressed that dogs very rarely are unharmed after having contact with antifreeze. Even a teaspoonful was sufficient to kill a cat and cause severe kidney damage in dogs!

So it was essential to spread the word.

No better done than by offering you this video. Watch it! Especially through to the end where Dr. Barker offers clear advice as to what to do if you suspect antifreeze poisoning of your dog or cat.

http://healthypets.mercola.com/sites/… Dr. Karen Becker, a proactive and integrative wellness veterinarian, talks about antifreeze poisoning, which often occurs when an animal encounters an antifreeze leak from a car radiator.

If this prevents even a single dog or cat from being poisoned by antifreeze then that’s a win!
So spread the word!

11 thoughts on “Beware of antifreeze”