From alerting you to the potential catastrophe of the Mustangs in Nevada.

Relationships across the internet, especially across the world of blogging are, oh, I don’t know, different! (OK, I hear some saying I could have chosen a more apt word; such as weird, self-indulgent, vain, and so on.)

Melinda Roth is an author. Her ‘goodreads’ page is here; her Amazon Books page is here; her website is here.  Melinda has started reading posts on Learning from Dogs and, likewise, I have read posts over at Anyone Seen My Horse?

Seven days ago, Melinda published a post under the title of Oh, yum.  This is the opening paragraph.

I ran across this recipe while doing a little research on horse slaughter (the Nevada Farm Bureau is suing the Bureau of Land Management because they want the federal agency to round up what’s left of America’s wild horses and send them to slaughter) so… thought I’d share:

When I read that I felt a mixture of anger, confusion, puzzlement; surely this can’t be the case?  Then I read on, skipping the recipes that Melinda included in her post.

Now, you might have to go to Canada or Mexico to get the horse meat, but we ship those countries about 150,000 of our unwanted equines for slaughter anyway, so your meat will probably be home grown in the USA. No worries.

That is, as long as you’re not too concerned about the unregulated administration of numerous chemical substances to horses before slaughter, which according to official reports “are known to be dangerous to humans, untested on humans, or specifically prohibited for use in animals raised for human consumption.”

If travel is out of the question, however, you can always buy imported horse meat online.

Check out My Brittle Pony, which is horse meat jerky seasoned with “Guinness, onions, garlic, fresh herbs and Soy Sauce and is guaranteed to contain no horse substitute such as beef.”

But if the Nevada Farm Bureau has its way, we won’t have to travel or use currency converters to buy horse meat. A majority of the country’s last wild horses live in Nevada, and that state seems ready to cash in on one of its most popular natural resources.

Anyone who knows anything about Jean and me knows that we love animals and we adore our own animals. Thus as I read Melinda’s post the pain and anguish building in me was indescribable; and I’m only half-way through the post. Yes, there’s worse to come.

According to reports published in the last week, the Nevada Farm Bureau and the Nevada Association of Counties want the BLM to round up just about as many remaining wild horses as they can. The BLM argues that it’s already housing about 50,000 wild horses it’s already captured and can’t afford to take in many more.

The Nevada Farm Bureau has an answer, however: The BLM should “destroy” horses that are deemed unadoptable.

I shall include one more paragraph from her post:

The Nevada Farm Bureau argues that there are too many wild horses on public lands. But there are only about 30,000 wild horses left, and since public lands seem perfectly able to support 1.75 million head of livestock (that belong to private ranchers), what exactly is the problem?

There’s more you should read so please do so.  Especially not forgetting to communicate your feelings to NVFB via the address listed on their web site – nvfarmbureau@nvfb.org

I wrote a comment to Melinda’s post endeavouring to explain what I was feeling. Melinda then pointed me to an essay by Andrew Cohen.  It was beautiful and it seemed in order to share it with you.  So here is Andrew Cohen writing about horses. 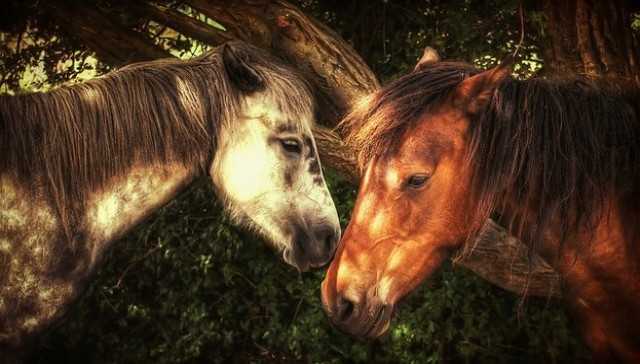 Why I Write About Wild Horses

I write about wild horses. I write an awful lot about wild horses. And it’s not just because I cherish the animals or admire all that they have done through the centuries to ease our burden here in North America. I sometimes get grief about my focus upon the nation’s herds, and I know that many people who don’t “get” horses, or who have never been near a horse, cannot fathom the depth of passion the animals engender among their human supporters. What can I say? I can’t help it and I won’t stop.

I write about wild horses for many of the same reasons that I write about mentally ill prisoners who are abused in their cells or about indigent defendants who cannot afford a lawyer or anyone else who has a voice, and rights, but who cannot be properly heard or who cannot have those rights acknowledged. Mordecai Richler, the late, great Canadian writer, long ago captured the essence of what I try to do with all my writing: “The novelist’s primary moral responsibility is to be the loser’s advocate,” he said. The actor Ricky Gervais said pretty much the same thing the other day, without the literary flair, when he said: “Animals don’t have a voice. But I do.”

I have a voice and I’ve chosen to speak out for these horses, which are being rounded up by the tens of thousands from our public and private lands and sent to holding pens in the Midwest — or sold into slaughter even though that is against the law. The government and the ranchers say these roundups must happen because there is no room for the herds, or because they graze too heavily upon the land, but ample evidence exists suggesting that this simply isn’t so. The truth is that there is plenty of room out West for these horses and there are plenty of ways in which the herds may be properly managed to ensure their survival without forcing them into cruel conditions or slaughter.

Why that isn’t happening is a story everyone ought to care about. So I write about wild horses because I think their treatment over the past four decades, since the passage of the federal law designed to protect them, reveals a great deal about American politics and the nature of the bureaucratic state. The Interior Department, which has stewardship over the herds, is little more than a straw man for the industries it is supposed to regulate. And those industries, which receive enormous federal benefits in the form of welfare ranching, and which in turn send millions of dollars and boatloads of lobbyists to Washington, want the horses off the public lands no matter what anyone else says.

I write about wild horses because last year the National Academies of Science issued a report scathing in its criticism of the Bureau of Land Management’s scientific approach to the herds. Before the report was issued, federal officials assured advocates that its conclusions would be respected (or at least publicly discussed). But it’s been seven months now since the report was issued and federal officials have done almost nothing about it. That’s just not unjust to the horses, and unfair to their human advocates, and perhaps a violation of federal law, it’s also terrible policy, as a general rule, for bureaucrats to ignore the findings of a report they themselves commissioned and paid for.

I write about wild horses because the last Secretary of the Interior was a rancher who did not even try to conceal his disdain for federal obligations to the horses and because the current Secretary of the Interior, herself a former engineer, has shown no interest in the herds or in addressing the concerns raised by the NAS report. Only the Interior Department, the backwater of all Washington beats, could engender so little muckracking when so much money, and so much else, is on the line. I write about wild horses because their story is the story of every other small interest without political power in Washington or the statehouses of this nation.

They are persecuted. They have rights but no remedies. And their fate isn’t going to get better unless more people come to understand the injustice of what’s happening to them — and how far the gulf is between the noble image we have given them in our national psyche and the reality of their perilous existence. That’s why I write about wild horses and it’s why I am grateful when anyone happens to read what I’ve written.

Now I don’t know one end of a horse from the other.  But Jean does.  In previous years, Jean was a keen horse-woman.  But me not speaking horse doesn’t mean that I am not passionate about doing something to help these poor wild horses. Even if what we do is only something tiny, as the old saying goes, by the inch it’s a cinch.  Jean is just as passionate about wanting to help as I.

Not only do we have two miniature horses here in Oregon, we have sufficient pasture to accommodate two of these Mustangs.  We want to adopt two horses or burros that, otherwise, would be slaughtered.

Tomorrow I will share how we are researching how one goes about adopting a mustang or a burro.  Because if only one extra horse is adopted as a result of the Melinda Roth – Andrew Cohen – Learning from Dogs sequence then that’s one less horse destined for slaughter.

Lovely what comes out of relationships!