Following on from yesterday.

In yesterday’s post I included the full documentary that was recently broadcast by the BBC. It was really interesting and a great insight into the uniqueness of the Welsh Sheepdog. More of that in a moment but first some details about Kate. As WikiPedia puts it:

Katherine “Kate” Humble (born 12 December 1968) is an English television presenter, mainly for the BBC, specialising in wildlife and science programmes. She was also the President of the RSPB until 2013.

Inevitably, Kate has her own website where one reads on the ‘home’ page:

Kate Humble and her sheepdog Teg set off to learn about the threats to British herding dogs. Filmed over a year, and with an exclusive insight into Kate’s shepherding life,  ‘Kate Humble: My Sheepdog and Me’, unveils the story of the Welsh Sheepdog, explores the challenges of breed recognition and celebrates the simple joy of a handful of puppies.

As changing farming practices, cross breeding and dog shows came about, so too did the decline of Britain’s working dogs.  Of 22 British herding dog breeds, 12 are now extinct and the 10 remaining are mostly show dogs or pets. Kate sets out to discover if Teg belongs to one of these rare breeds, criss-crossing Wales as she uncovers the story of the Welsh Sheepdog and tries to find a mate for Teg.

From sheepdog trials to droving, from DNA profiling to a nationwide search for a mate, Kate and Teg’s journey is a celebration of the Welsh landscape and rural traditions. It also delves into the hi-tech, hi-value world of breeding rare dogs, and explores the timeless bond between humans and their dogs.

Join Kate and Teg as they play their part in the continuing survival of Britain’s herding dogs.

Clearly the effort to save the future of the Welsh sheepdog is significant underpinned by the fact that there is a society devoted exclusively to the breed: The Welsh Sheepdog Society. The website of the Welsh Sheepdog Society also has a page where registered sheepdogs are for sale. I’m going to republish the details on that page not only to show readers what the dogs look like but also to promote them to a wider audience. 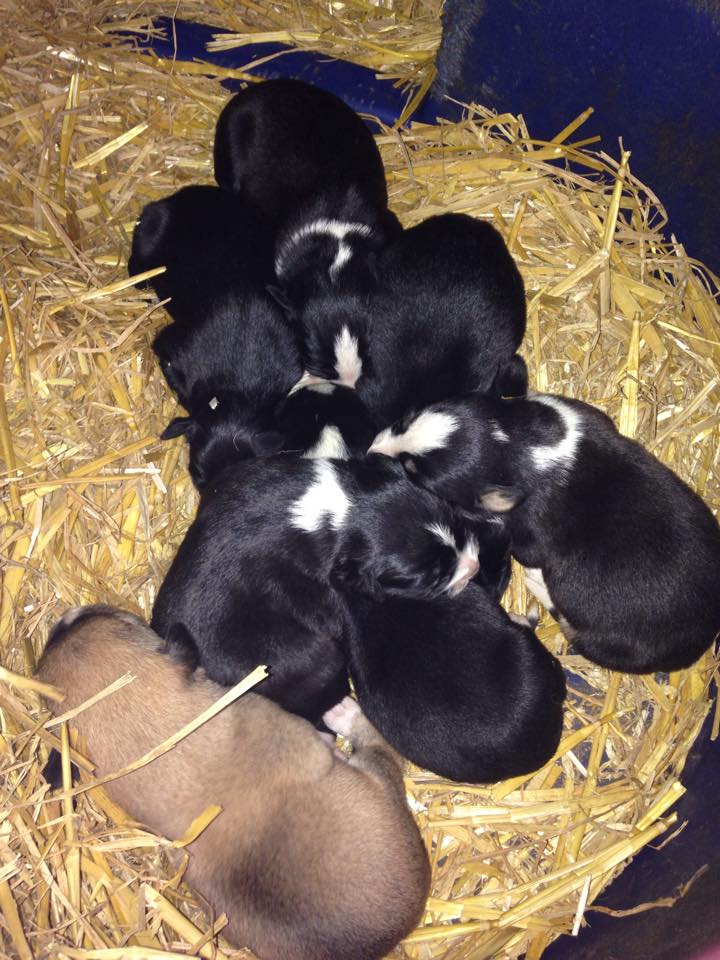 Let me finish off today’s post by extensively quoting from the WikiPedia page about the Welsh Sheepdog.

Like other types of working dog, Welsh sheepdogs are normally bred for their herding abilities rather than appearance, and so they are generally somewhat variable in build, colour and size. Welsh sheepdogs are of collietype, usually black-and-white, red-and-white or tricolour, and merle markings may occur over any of these combinations. The coat may be short or fairly long, and the ears are pricked, but usually folded at the tip. They are longer in leg, broader in chest and wider in muzzle than the Border Collie. They are extremely active and intelligent, and therefore need much exercise and mental stimulation, if they are to be kept as pets. Welsh sheepdogs are more commonly known as Welsh collies, however these are the same breed.

Over many decades the Welsh sheepdog has largely been replaced for working sheep in Wales by the Border Collie, a standardised breed. However, in more recent years, efforts have been made to maintain the indigenous Welsh sheepdog as a distinct variety.

Welsh sheepdogs are usually of loose-eyed action, not fixing the stock with their gaze like the strong-eyed (de)Border Collie. They are able to work independently without necessarily being under direct human control. Welsh sheepdogs are most often used for herding sheep, but also readily work cattle, goats, and even horses and pigs. Traditionally they were often used as droving dogs to take cattle and sheep to markets locally or elsewhere in Britain.

At one time there existed many sheep-herding dogs peculiar to Wales; during the 18th century Welsh drovers taking sheep for sale took with them five or six Welsh sheepdogs as “herders on the narrow roads, guards against highwaymen, and providers of game on the route”. These were an early type of Welsh sheepdog, higher on the leg and more racily built than the modern day breed.

However, by the 1940s the group had decreased to two or three breeds only. The ancient pure breeds of black-and-tan sheepdog and Welsh hillman were almost extinct, and were scarcely ever seen working. The type best known in Wales at that time was mostly descended from the old black-and-tan with an infusion of working Border Collie blood.

In the 1940s the Welsh sheepdog was still common throughout the north and central Welsh counties. In herding activities, it did not normally work low to the ground in “the showy manner sometimes seen in the work of the working [Border] Collies”, as British dog fancier C. L. B. Hubbard put it in 1948. It was variable in type; approximately 18 in (46 cm) in height, but the weight ranged from the lighter built, leggier dog of North Wales at 35 lb (16 kg) to the more solid 40 to 45 lb (18 to 20 kg) dogs of Glamorganshire and Monmouthshire. There were no dog show classes for the Welsh sheepdog as it was purely a working breed.

Finally another picture of Kate and Teg.

Why is something so obvious almost beyond reach?

Like many others, I saw the first episode of the BBC2 television programme, The Big Silence. It clearly touched many people. (Useful links at the very end of this article.)

I wanted to throw a bit of light on this fascinating subject.  As the five people in the TV programme all readily admit, real silence is rather scary to them.

Why would something so wished for by so many – an hour doing absolutely nothing – be sufficiently scary that, in reality, the majority will do everything in their power to avoid silence?

Let’s go to a video recorded by Abbot Christopher Jamison a couple of years ago in connection with the BBC Programme Finding Happiness.  Here it is:

The points made by Abbot Jamison in that video apply just as much to the task finding peace through silence.  Around the 3 minute mark, the Abbott says,

If we come to terms with our demons then we will find that we are not unhappy ….. face the unhappy demons.

We all have unhappy demons, OK some more than others.  We start to hear them when we gift our bodies and minds the grace of real silence.  I deliberately included the word ‘bodies’ even though silence is a ‘mind’ thing because resting our bodies with regular silence will also be very therapeutic for us.

What does coming to terms mean?  It means giving space to those inner thoughts so that one can clearly hear them.  You probably won’t make sense of them, indeed they may have a great unsettling effect, but they won’t hurt you.

Indeed, it’s when we try and stop those inner demons that they manifest themselves in many other ways: fidgeting, funny little unexplained aches, itchy skin, short-tempers, constant feeding of the ego, and on and on and on.

A good indication of what’s going on ‘under the bonnet’, so to speak, is to see if you can sit still in a relaxed manner for just 15 minutes.

Let’s go back to the website where you can buy the booklet on Growing into Silence.  Here’s what is written there:

The Big Silence is a BBC TWO series about five men and women all of whom believed that they would benefit from finding more time for silence in their lives. They all felt that they needed to slow down and attend more to some of the deeper issues in life. They had little or no outward religious practice but all said that they were open to religious guidance. The result is a journey that took them into a deep silence and in that silence they discovered some powerful dynamics working in their own lives. – All of them were profoundly changed by the experience.

This 44-page booklet, Growing into Silence, offers you the chance to enter into that silence in your own life. You can undertake similar spiritual exercises to those which the volunteers undertook. To help you deepen some of the insights expressed in the series, there are also details of further resources, including a booklist and websites which you can explore.

Each of the exercises in this booklet is presented as a prayerful reflection. They assume that you are not alone as you reflect on your life. You carry out this process in the company of a loving God who looks over you, supports you, and who may well have something to add to your reflections. This is not a hidden way of persuading you to go to church, or sign up to any particular belief-system. Even if you have no idea about God, you can look at whatever most brings you to life or fills you with energy. That is always the most appropriate starting point.

Look at this sentence again, “The result is a journey that took them into a deep silence and in that silence they discovered some powerful dynamics working in their own lives.”

And now is not the time to have any form of reaction to the word, God.  God, as it is said, works in mysterious ways and if those mysterious ways enable you to move towards your soul then don’t analyse it, just accept it as it is.

My co-author, Paul, wrote an article about Thinking about Truth on the 11th September. He wrote about Dr David Hawkins, another great-standing advocate of the importance of consciousness. Paul wrote in that article,

Think about what Hawkins is saying. He is saying that we intuitively know, without the need of intellectual argument or ‘proof’, the rightness, the beauty, the perfection of some deeply fundamental concepts.

It’s as if from the earliest moments of human awareness, gravity, sunlight, night and day, for example, were obvious despite eons of time needing to pass before science could ’explain’ these aspects of life.

In that blog article, Paul quotes Hawkins, “True power, then, emanates from consciousness itself; what we see is a visible manifestation of the invisible.”

It’s a simple step to connect what the Abbot is saying with that sentence from Hawkins.  Silence is the way to hear our consciousness, and those sounds, those inner voices, are the manifestation of what, otherwise, we don’t ‘see’.

Here are the last three paragraphs from the article on truth:

A very well-known magical attribute of the human brain is what goes on in the sub-conscious, our ‘back-office’. Give the brain some space to process a dilemma such as deciding what to do for the best and it does come up with what is best for us. Often the best space we can provide for our brain is a good night’s sleep. It’s common folklore to ‘sleep’ on a problem.

My co-founder of Learning from Dogs, Paul, says that often in sleep we find the truth. I think the same could be said for meditation and prayer, as in a spiritual sense more than in a religious sense.

The earlier article from Learning about Dogs, Thinking about Truth