Tomorrow on Learning from Dogs there is part one of a six-part Post about The Secret Life of the Dog.  It includes the amazing proposition that our relationship with dogs was instrumental in early man becoming civilised.  (Assuming, of course, that you believe mankind is civilised!)

Thus it is with great pride that today’s Post presents the courageous and successful efforts of LA Fire Fighters rescuing a German Shepherd dog, scared out of its wits, from drowning in a river. 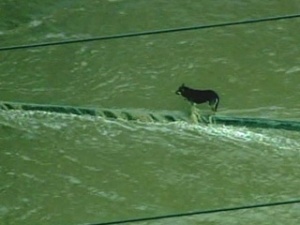 Here’s an extract from the Los Angeles Times:

We don’t know about you, but we were glued to our TV screen earlier this afternoon as the effort to rescue a large dog trapped in the flooded Los Angeles River was broadcast live.  The rainstorms that have been pummeling L.A. over the past few days have caused the river to swell.  It’s unclear who, if anyone, owns the dog, or how it managed to fall into the fast-moving river in Vernon.

The full article and a video of the rescue may be seen here. The article goes on to say:

Firefighters first attempted to rescue it by dangling flotation devices from a bridge overhead, to no avail.  The dog then evaded firefighters who tried to approach it, sloshing further down the river.  Around 12:30 p.m., it managed to reach the edge of the river and attempted to climb up a steep concrete wall to safety, but several times fell back into the river.

Finally, a firefighter dangling beneath a helicopter managed to grab hold of the terrified dog, who responded (rather predictably) by biting its rescuer and thrashing about.  Despite the inherent difficulty of rescuing an animal that doesn’t want to be rescued, the firefighter managed to lift the dog to safety; both were deposited on a nearby bridge.  The dog was transferred to an ambulance for veterinary care and its rescuer was taken to a hospital for treatment of bite wounds, KTLA reported.

The BBC also has a nice video clip here

And a great set of pictures here. Such as this one …