This is no sinecure – the future of mankind is at risk.

Very often I find a topic for Saturday that is easy on the mind. But I make no apologies for republishing, with Jennifer’s permission, a post that she published over on Transition Times yesterday. When you read it you will see clearly that promoting this today is right. For many readers may well be able to join thousands of others in showing their support for the Standing Rock Sioux tribe.

World War III Has Begun: Which Side Are You On?

Although you wouldn’t know it from scanning the front pages of the mainstream media, a major battle in what Bill McKibben has called World War Three, the war to save the planet from human destruction, has been going down in Indian Country for the past six months.

Thousands of Native Americans, members of a whole host of tribes, have gathered at Standing Rock, North Dakota, to protest the North Dakota Access Pipeline (#NoDAPL), which was sited by the Army Corps of Engineers to run dangerously close to the Missouri River and the Standing Rock Reservation.

But as the protesters say, they are not just defending Indian country, they are defending everyone who relies on the Missouri for water—and not just humans but all life.

If there is anyone to look back at this turbulent period in human history on Earth—now coming to be known as the Anthropocene—they will surely wonder at the suicidal tendency of human civilization in the 20th and early 21st centuries.

Why, they will ask, would such an intelligent species willingly—even enthusiastically—engage in the poisoning of its waterways and underground water resources; the destruction of its forests; the chemical contamination of its soils and oceans; the overheating of its precious atmosphere by relentless burning of fossil fuels? Why would humans put so much of their intelligence and technological prowess into developing ever more lethal weapons of mass destruction, used to bludgeon each other? Why would they preside blithely over the extinction of millions of other species, the vicious ripping of the great ecological web of life on Earth?

I know it’s hard for any of us to escape the clutter of our everyday lives, with the constant pressures and worries that beset us on the personal level. But this is precisely what is being asked of us now.

The courageous defenders out at Standing Rock dropped their ordinary lives to be part of the historic encampment protesting the stranglehold of the oil companies on our waterways and our lands. They are fighting in the courts, through the media, and most importantly with their physical presence, standing up to the bulldozers, the attack dogs and the pepper spray.

This is what McKibben’s World War Three looks like—it’s already begun. It will be fought locally, as communities and individuals wake up to the implications of the destruction and decide that hell no, they won’t take it any more.

In my own corner of the world, we are under assault from General Electric, wanting to create toxic waste dumps right in the middle of our small rural towns. We have a gas pipeline being constructed, despite vehement protests, through a pristine old-growth state forest. We have oil tanker trains running constantly right through our communities. Despite a thriving organic and biodynamic farm renaissance, we still have far too many pesticides, herbicides and fungicides being used locally, and too many trees being cut down.

I have been thinking and writing for some time now about how important it is to align the personal, political and planetary in our own lives and in the way we relate to the world around us. On all three of these levels, 21st century American life is way out of balance.

It is time to focus, each one of us, on using our brief lifetimes to create balance and harmony on Earth. Sometimes the way to harmony leads through protest and discord, as is happening now in Standing Rock. Sometimes it can be as simple as choosing to support local, low-impact agriculture rather than industrial agriculture. Leaning on our political representatives to move faster on policy that will shift our society to renewable energy is key.

There are so many ways to get involved in this War for the Planet, many of them quite peaceful. The important thing is to get off the sidelines. Get involved. Feel the potential of this moment—it’s literally a make or break period for the future of humanity on Earth, and many other living beings too.

The brave defenders at Standing Rock are reminding us that we are all “natives” of this Earth, and we all have a stake in protecting her. Which side are you on?

Yes, we are all natives of this world and that includes our dear animals and our wonderful animal companions.

Make a promise to yourself to make a difference; even one small difference. With that in mind, if you want to find an event close to you then the Sierra Club have a page where you can look up which event you would like to attend.

“It sometimes feels like a strange movie, you know, it’s all so weird that sometimes I wonder if it is really happening.”

This quote by Marshall Bruce Mathers III (born October 17, 1972), better known by his stage name Eminem, is so apt for today’s item.  Because in so many places in so many countries, the weather ain’t what it used to be!

According to NOAA scientists, the globally-averaged temperature for March 2013 tied with 2006 as the 10th warmest March since record keeping began in 1880. It also marked the 37th consecutive March and 337th consecutive month with a global temperature above the 20th century average.

So with all this in mind, I’m republishing a recent item on Climate Crocks, with the permission of Peter Sinclair.

I’ve been recovering from earth-month speaking-event whiplash, having criss crossed the state over recent days to talk about climate change, and what scientists are telling us.

Meanwhile, Paul Douglas, above, gave a brief summary of what we know about the extreme spring in the US, just before the current river of moisture hit across the nation’s midsection last night. 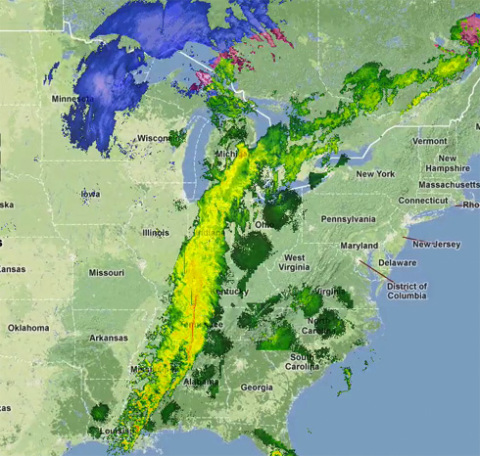 Near record setting flooding is hitting at my location, schools closed and evacuations underway.  I got a bump from Jeff Masters last night about the situation, he is grappling with the big picture, will be posting more later today.  For now, more concern about extreme weather knock-on effects – possible washing of dangerous invasive species into the Great Lakes water system.

The rains have brought the Des Plaines River on the east side of Chicago to major flood stage this morning, and a record flood crest is expected on Friday. The Asian Carp, a dangerous invasive species that would cost billions of dollars were it to get loose in the Great Lakes, is present in the Des Plaines River. Today’s flood event is capable of washing significant numbers of Asian Carp from the Des Plaines River into a canal that feeds directly into Lake Michigan, where they might be able to set up a breeding population capable of devastating the Great Lakes’ fishing industry. However, in October 2010, the U.S. Army Corps of Engineers completed the Des Plaines River barricade, a 13-mile-long system of concrete barriers and a specially fabricated wire mesh that allows water to flow through the fence but prevents the passage of fish. Hopefully, this barricade will withstand the flood and prevent Asian Carp from washing into Lake Michigan.

The Met Office has just released a report entitled “why was the start to spring 2013 so cold?”
–
The immediate cause was a natural climate fluctuation called the North Atlantic Oscillation (NAO). The NAO switches between two states, and this winter (in its negative phase) saw a southward shift of the jet stream, bringing cold air over the UK from northern Europe and Russia.

The Met Office identifies three other natural climate variations that may have made the negative NAO phase more likely.

One is the recent behaviour of another natural climate fluctuation, called the Madden-Julian Oscillation ( MJO). It was particularly strong during late February and March – often a sign that a negative NAO is on the way.

This winter also saw what’s called a Sudden Stratospheric Warming ( SSW) event, where winds in the stratosphere above the north pole reverse direction. This brought cold weather conditions to the UK.

Finally, Europe’s climate is influenced by another natural climate system – the Atlantic Multi-decadal Oscillation ( AMO). While the influence on UK winters is unclear, the report suggests:

“[T]here is some evidence that the changes in Atlantic sea surface temperatures associated with the AMO, dispose the circulation to give drier than normal spring conditions over the UK and northern Europe.”

What about the effects of human-caused climate change? One question that has been much discussed recently is whether the recent rapid decline in Arctic sea ice could contribute to a change in the UK’s weather. 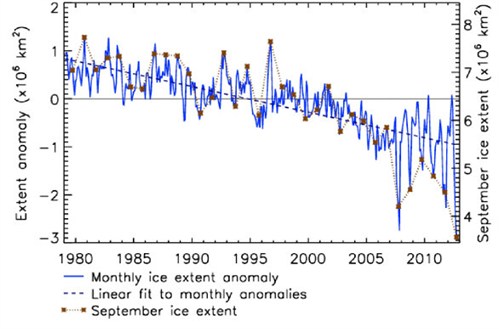 The new report explains how this could work:

“It is argued that amplification of global warming over the Arctic is reducing the equator to pole temperature gradient, thereby weakening the strength of the mid-latitude jet streams.”

This could allow cold Arctic air to push further south, over mid-latitude countries like the UK, and weather patterns could stay longer in one place.

The possibility of a link between the Arctic and UK weather appears to be gaining scientific support, but the Met Office acknowledges it’s still an “area of ongoing research”. The Met Office has told us it’s holding an “ informal workshop” in the next two to three months for leading UK scientists plus several international experts.

While scientists are making progress in working out how climate change could influence the odds of abnormal weather, it would be unwise to attribute one year’s events to a single cause. The report points this out, noting that:

“…no single explanation can account for the cold conditions observed”.

The report also highlights that although this spring was unusually cold,”it is not unprecedented or outside the expected natural variability of our climate”.

Nevertheless, with what the Met Office describes as “particularly heightened interest” in recent weather, getting to grips with how climate change could be affecting things is important. Even if, as the Met Office suggests, the complexities of the UK weather make “communicating the science drivers more complicated and nuanced than some audiences may wish.”

So wherever you are, do try and watch the Chasing Ice film because the more we all see the truth of what’s happening the better we can embrace change; locally, regionally, and globably.