The great relationship that can exist between dogs and cheetahs.

Before you read on let me raise my hand in connection with this blog. Or to be clearer, next Monday Jean and I have the very great pleasure in welcoming my daughter, Maija (she of Sonic Journeys from SOUND UK), her husband, Marius, and my grandson Morten. They are staying with us until the 24th July.

Inevitably, and for all the right reasons, I will not be putting in anything like the normal time I usually spend on Learning from Dogs. It did cross my mind to stop blogging for those seven days but that seemed like a step too far.

However, what is certain is that the period from now right through to the last week in July is going to see me lowering the priority of this blog and being more random in nature in terms of if or how I respond to your comments and replies.  You will also read a succession of repeats of posts from previous years. I’m hoping that because so many of you will not have been reading this place during my early years that the number of times you see something that you have previously read is kept to a minimum.

So why this note to you all today? Because the rest of this week is going to be pretty busy as we get the house all tidied up and fully prepared for our visitors.

Having got that off my chest do read the following that appeared recently over on Care2.com.

How Dogs Are Saving Cheetahs From Extinction 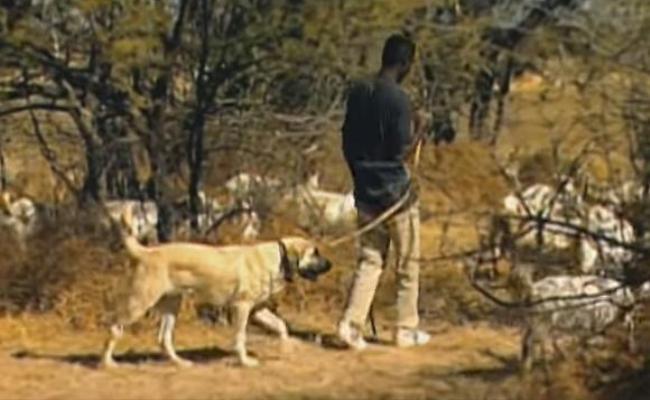 Cheetahs, the fastest land animals on Earth, have been disappearing almost as fast as they can run.

But in the African country of Namibia, the cheetah population has grown from 2,500 to 4,000 since 1994. And dogs are helping to keep those numbers rising.

Instead of trapping or shooting cheetahs that wander onto their property and kill livestock, some farmers are relying on Anatolian Shepherds and their fierce barking to scare away the predators.

“You may see in history that this dog can be responsible for saving the cheetah from extinction,” Jack Hanna, director emeritus of the Columbus Zoo, told CBS News. “That is one heck of a story right there.”

The dogs are provided to farmers and ranchers by the Cheetah Conservation Fund (CCF), the world’s leading organization dedicated to saving the lives of cheetahs in the wild.

The majority of cheetahs in the wild – over 90 percent of them, according to the CCF — live outside protected areas, surrounded by farming communities. And many of those farmers, especially poor ones, are more concerned about protecting their livelihood than an endangered species. About 10,000 cheetahs were killed during the 1980s, before CCF launched the Livestock Guarding Dog program in 1994.

Since then, the program has placed more than 500 dogs, helping to reduce the loss of livestock from 80 to almost 100 percent. The program is extremely popular — there’s a two-year wait to get in. It not only provides free Anatolian Shepherd puppies, but also training advice and free veterinary care.

“CCF research shows that the people’s attitudes towards predators are changing as a result of this and other CCF programs,” the organization said on its website.

As a way to promote “the life-saving role dogs play for cheetahs in the wild,” according to CBS News, some zoos in the United States are raising puppies with cheetah cubs.

“The number one question up here, this $40 million exhibit: ‘Are the dogs coming out?’” Suzi Rapp, director of the Columbus Zoo’s animal programs, told CBS News. “And I say the Columbus Zoo built the world’s most expensive Labrador retriever exhibit in the world… the biggest dog run.”

Dogs and cheetahs can also be found together at the Cincinnati Zoo. It was there, as you probably remember, where Harambe the gorilla was shot to death when a boy fell into his exhibit. His killing sparked international outrage and concern over keeping wild animals captive in zoos.

What are domesticated animals doing in these zoos? Like the Anatolian Shepherds in Africa, the zoos say, the dogs are helping to prevent cheetahs from becoming extinct. But instead of scaring cheetahs away from livestock, the zoo dogs are best buddies with the cheetahs. Their friendship, which begins when they’re about 3 months old, helps put the skittish cheetahs at ease so they can more easily be bred.

The San Diego Zoo, which has been raising dogs with cheetahs for over 30 years, gets many of its puppies from animal shelters. So in a way, the rescued dogs are paying it forward by helping save the lives of another species.

That Care2 article by Laura Goldman included a short video from CBS News. However, despite me having a link to that video I couldn’t get it to play.

No problem because YouTube came up with a very good alternative.

CCF Operations Manager Brian Badger explains how our Livestock Guarding Dog program works as part of the whole of CCF’s operations to help save the cheetah in the wild.

In fact, there was more than one interesting video and I couldn’t make up my mind which was best.

So you got two!

In Gobabis, Namibia, these Kangal dogs guard the goats against predators, including the worlds largest population of wild cheetahs. This stops the farmers from targeting the cheetahs. Since the big dogs were introduced to Namibia, the cheetah population has reached a 30-year high ! Hurray!

As I have been intimating previously, today is the start of my mother from London visiting us here in Oregon.  Thus, as one would expect, time for blogging is going to be restricted. Then in a week’s time, we are also joined by my sister, Elizabeth, who lives in Tokyo. So, dear reader, you will understand if there is a deficit of creative writing, assuming you find some of it creative, why that is.

Thus today, I’m leaning heavily on a recent item I read on the EarthSky blogsite.  It’s all about pronking! Yes, I hadn’t come across the word before.

Does your dog pronk?

Alpacas, gazelles, some deer and baby lambs are all known to pronk. That is, they leap into the air as if leaping for joy, lifting all four feet off the ground at once. The fact that – in some species like sheep – young animals do it more than older ones does suggest playfulness. But, among wild animals, pronking may be a way of avoiding predators. It means something like, “Hey, I’m very fit so don’t bother chasing me.”

But how about dogs? I didn’t find much online discussion about true dog-pronking, although many of us, at one time or another, may have seen our dog leaping for joy. I recall my own dog Snoop (rest his soul) released from the car in a South Dakota meadow, leaping and running like crazy through the long grass for maybe 20 minutes, until we called him back. It was one of the most joyful things I’ve ever seen, and definitely one of my best memories of Snoop.

So enjoy the videos below. And, by the way, although it is a survival strategy for some, the very word pronk comes from an Afrikaans verb pronk-, which means show off or strut. It has the same linguistic derivation as our English verb prance.

Original video from http://www.dogwork.com where you can also adopt homeless animals. You can also support shelter for dogs in Russia, http://www.facebook.com/helpadog

“Pronking” seems to occur when an animal gets excited and jumps around his field, leaving the ground with all four feet simultaneousl, almost as though he had springs attached to his feet..Often these jumps can be high in the air.No-one really knows why llamas pronk. Certainly it is the response to some sort of excitement or disturbance. It is often infectious; sometimes my entire herd will take off. I am told that it isn’t only llamas but sheep and goats. Those of you old enough to remember BBC’s Magic Roundabout may well recall that Zebedee was a “pronker”. We never had a telly as kids, but I believe Zebedee was a dog (??).

Bottom line: Among wild animals, pronking seems to be a way of avoiding predators. But when you see an animal pronk, you can’t but think it’s leaping for joy.

So there you go.  Don’t say that Learning from Dogs doesn’t teach you some new words from time to time!