The power of our beautiful creatures to heal us.

Yet again, another example of a post almost writing itself.

Yesterday, I published a post about being sensitive to the world around us.

Then this morning there was a new post from Sue Dreamwalker under the title of Fear of the Future. It was uncharacteristically downbeat for Sue.

Now most who follow me know I try to bring a positive touch within my posts… Yet to be quite honest with you all I am really struggling right now to lift myself from the doldrums of my own thoughts.

The key to conquering our fears lies in awareness. When we identify the irrational thoughts that frighten us and replace them with positive affirming ones.

Argh… all easier said than done..

You would think with my inner Knowing, and my Spiritual mind I should be the last person to take a nose dive into that Pit of depression.. Especially when I dredged its depth before and vowed that I had been there done that and worn the T-shirt and I refuse to wear it again.

Many left comments including me. I spoke of the reward of hugging a dog. My words included:

I don’t have answers other than to feel what you are feeling. All I hang onto when I spend too much time thinking of my own mortality is that the answer, the answer to the moment, is to bury one’s face into the warm, soft fur of a dog. They seem to sense my need at these times. (And that isn’t meant to sound like me devaluing the love and affection that I receive from Jean!)

In other words, that contact with the warm dog holds me in the present and before long the reinforcement of living that present, loving moment puts the unknown future into perspective.

The only thing that I have seen working in my life is to keep living, as much as possible, in the present. There is nothing to fear, either of the now or of the future.

In this context, wish to leave you with the story of the pregnant deer; in a forest, a pregnant deer is about to give birth. She finds a remote field near a strong-flowing river, that looks like a safe place, as she starts going into labour. At the same moment, dark clouds gather in the sky and streaks of lightning sets off a forest fire. The deer looks to her left and sees an approaching hunter with arrow pointed at her. To her right, the deer spots a hungry lion speeding towards her. What can the pregnant deer do? She is in labour! What will happen? Will the deer survive? Will she give birth to the fawn and will it survive? Or will everything be burnt by the forest fire? Or will she perish to the hunter’s arrow? Or does a horrible end await her at the hands of the hungry lion? Constrained by the fire on one side, the flowing river on the other and boxed in by her natural predators, the deer is apparently left with no option. What does she do? Well, she focuses on delivering and giving birth to a new life.

The sequence of events that follows is the Lightning strikes and blinds the hunter, who releases the arrow which zips past the deer and strikes the hungry lion. It starts to rain heavily and the forest fire is slowly doused by rain water. The deer gives birth to a healthy fawn….In our life too there are moments when we are confronted with negative thoughts and possibilities on all sides, so powerful as to overwhelm us. May be we can learn from the deer. The priority of the deer at that given moment was to give birth as safely as possible.

The rest was not in her hands and any change in her focus would have most likely impeded giving birth to the fawn. In the midst of the severest storm, we just have to maintain presence of mind and do what is in our control…the Cosmic power will take care of the rest…best wishes… Raj.

Finally, there was a recent new follower of this place. Her name is Emma and she writes the blog The Muse in the Mirror. Emma was kind enough to grant me permission to republish a post from last December about the healing power of Llamas. Enjoy! 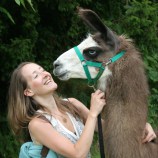 It’s official; I LOVE llamas. There, I said it, put out there for the world to know! I love their gentle, sensitive nature, friendly disposition and most of all their goofy, giggle-worthy expressions, which never fail to bring a smile to my face! Concerned that my llama loving status was bordering on obsession, I was beginning to question whether my love for these comical camelids was founded on anything other than sheer amusement! Thankfully as I researched further my findings confirmed that these beautiful animals are much more than a pretty (funny) face!!!

I squealed in delight when Colours Magazine published the story about The Delta Society, a non-profit organization that licenses animals for therapy

in USA. The adorable photo’s lay testament to the happiness that llama’s bring to residents at Bellingham Health and Rehabilitation Center in Washington, USA. Llama Marisco (pictured above), and Llama N.H. Flight of the Eagle (pictured right) are trained therapists, who spread comfort and joy as they stop at each bed to kiss the patients or have a hug. Resident Holly Barto remarked that…

“It was heaven. Just emotionally – to be able to touch an animal and hold an animal close.”

Another example of the profound healing benefits of llama’s can be seen in this adorable video below showing Rojo the therapy llama and Napoleon the therapy alpaca from Mtn Peaks Therapy Llamas & Alpacas, in Vancouver, WA USA. A non-profit corporation, which offers therapy teams to visit hospitals and schools in the area. The expressions on people’s faces are heart warming to say the least!

“Who knew such fluffed-up, carrot munching mammals could bring so much joy.”

Laughter is the best medicine.

If I am having an off day, the first thing I reach for is a funny llama picture. Better still, a visit to the local llama park soon blasts my bad moon into infinity and beyond! A good giggle-fest at the Ashdown Forest Llama park, in East Sussex, dissolves the blues and confirms that laughter really is the best medicine! (See my picture gallery below to see me with some of the residents of the Ashdown Forest Llama park!).

There’s a very good reason behind the saying Laughter is the best medicine. Research suggests that people feel less pain after a good laugh, because it causes the body to release chemicals that act as a natural painkiller. ‘Professor Robin Dunbar of Oxford University, who led the research, believes that uncontrollable laughter releases chemicals called endorphins into the body which, as well as generating mild euphoria, also dull pain.’ (BBC)

It is common knowledge that animals in general make us happier and brighten our spirits. A growing body of scientific research now suggests that interacting with animals can make us not only happier, but healthier too. That helps explain the increasing use of animals for therapeutic purposes in hospitals, hospices, nursing homes, schools, jails and mental institutions.

The use of pets in medical settings actually dates back more than 150 years, says Aubrey Fine, a clinical psychologist and professor at California State Polytechnic University. Fine who has written several books on the human-animal bond says:

“One could even look at Florence Nightingale recognizing that animals provided a level of social support in the institutional care of the mentally ill,”

So there you have it, next time you’re feeling blue, you know what to do! Head on out to your nearest llama park to insight those warm fuzzy feelings from a fluffy four legged llama! Check out my favourite selection of Llama and Alpaca pics below, guaranteed to bring a smile to any face!! 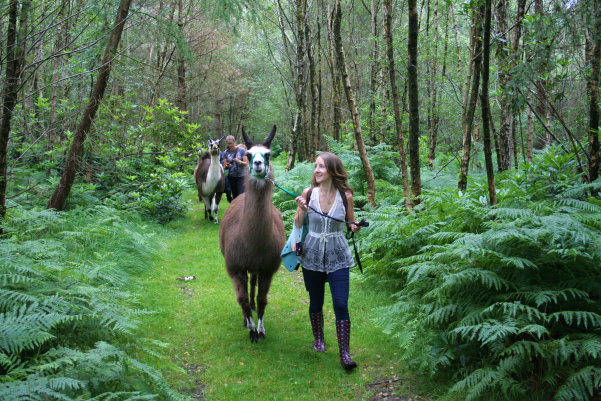 Note: That last photograph above is only one of a wonderful collection of Llama photographs that Emma included in her blog post. Do drop across there and admire all the wonderful pictures.

The incredible healing power of hugging an animal.

As I have been intimating previously, today is the start of my mother from London visiting us here in Oregon.  Thus, as one would expect, time for blogging is going to be restricted. Then in a week’s time, we are also joined by my sister, Elizabeth, who lives in Tokyo. So, dear reader, you will understand if there is a deficit of creative writing, assuming you find some of it creative, why that is.

Thus today, I’m leaning heavily on a recent item I read on the EarthSky blogsite.  It’s all about pronking! Yes, I hadn’t come across the word before.

Does your dog pronk?

Alpacas, gazelles, some deer and baby lambs are all known to pronk. That is, they leap into the air as if leaping for joy, lifting all four feet off the ground at once. The fact that – in some species like sheep – young animals do it more than older ones does suggest playfulness. But, among wild animals, pronking may be a way of avoiding predators. It means something like, “Hey, I’m very fit so don’t bother chasing me.”

But how about dogs? I didn’t find much online discussion about true dog-pronking, although many of us, at one time or another, may have seen our dog leaping for joy. I recall my own dog Snoop (rest his soul) released from the car in a South Dakota meadow, leaping and running like crazy through the long grass for maybe 20 minutes, until we called him back. It was one of the most joyful things I’ve ever seen, and definitely one of my best memories of Snoop.

So enjoy the videos below. And, by the way, although it is a survival strategy for some, the very word pronk comes from an Afrikaans verb pronk-, which means show off or strut. It has the same linguistic derivation as our English verb prance.

Original video from http://www.dogwork.com where you can also adopt homeless animals. You can also support shelter for dogs in Russia, http://www.facebook.com/helpadog

“Pronking” seems to occur when an animal gets excited and jumps around his field, leaving the ground with all four feet simultaneousl, almost as though he had springs attached to his feet..Often these jumps can be high in the air.No-one really knows why llamas pronk. Certainly it is the response to some sort of excitement or disturbance. It is often infectious; sometimes my entire herd will take off. I am told that it isn’t only llamas but sheep and goats. Those of you old enough to remember BBC’s Magic Roundabout may well recall that Zebedee was a “pronker”. We never had a telly as kids, but I believe Zebedee was a dog (??).

Bottom line: Among wild animals, pronking seems to be a way of avoiding predators. But when you see an animal pronk, you can’t but think it’s leaping for joy.

So there you go.  Don’t say that Learning from Dogs doesn’t teach you some new words from time to time!