Refreshing dear connections from the past!

So on Friday the 13th of April daughter Maija ran Jean and me to the railway station at Haywards Heath to catch a train into London, specifically to Victoria Station.

Then we boarded the London Underground to get ourselves from Victoria Station to Bounds Green tube station on the Picadilly Line. It was a bit of a culture shock for both Jean and me; to say the least. But we managed it somehow and once at Bounds Green there was my sister Eleanor to greet us. Eleanor lives in Johannesburg in South Africa (long story) but needed to come to England and made arrangements that meant she could meet with us for this one afternoon and evening. For Eleanor had pre-booked a bed and breakfast in Coniston Road, London N10.

Eleanor is twelve years my younger sister and it was only later on in life that both of us realised what a precious age gap that was. For as Eleanor was growing up in her early years I was at the age of wanting to be the big brother to her and it became, and still is, a very close bond.

Immediately upon meeting we found a nearby cafe to grab some lunch and do a bit of catching up!

The afternoon and evening went by far too quickly and fairly smartly on the Saturday morning, the 14th, we said our ‘goodbyes’ and Jean and I struggled for the second time in twenty-four hours with the Underground! This time making our way from Bounds Green to Paddington Station, the main line station that serves Bristol and places in between, as in the Great Western Railway, as well as down to the South-West including Exeter and then on to Plymouth and into Cornwall.

Our train journey was from Paddington to Swindon Station to be met by Richard and Julie.

Richard is my longest, closest and dearest male friend.

He and I go back very many years, for we met not long after I had

We hit it off immediately and over the intervening years, as in the thick end of 40 years, there’s not a lot that we haven’t shared in terms of fun and frolics, and especially a great many flying exploits in my group-owned Piper Super Cub!

When Jean and I got together in 2008 as you might imagine she quickly became close friends with Richard and Jules, as Richard calls Julie.

Plus Jean and Richard share a rather ironic, if that’s the right term, event. For both of them were diagnosed in December, 2015 with the early stages of Parkinson’s Disease!

As with seeing Eleanor, the time with Richard and Jules was far too short but, nonetheless, very

precious. Plus, dear Murphy gave Jean and me a much-needed dog fix!

Thus on the morning of the 15th, Richard and Jules ran us across to Bristol which is where my son, Alex, is living with Lisa, his partner.

The plan was to spend from Sunday, the 15th, through to Wednesday, the 18th, with Alex and Lisa. Alex had booked time off work for those days but Lisa unfortunately was working during the weekdays.

Yet another meeting of dear friends, as in Richard and Jules catching up with Alex. 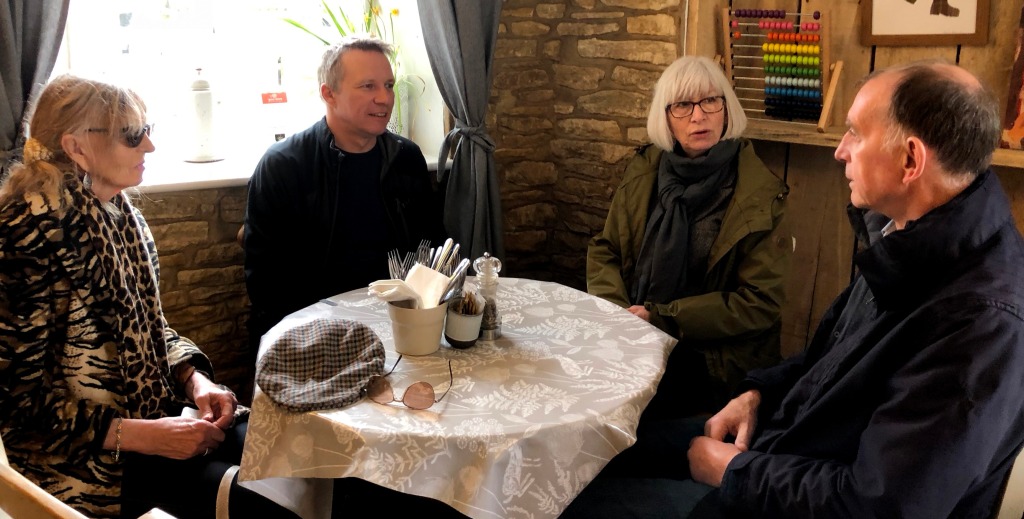 Alex had arranged for Jean and me to go down to South Devon on Monday, 16th, to meet with John Joiner, my dear brother-in-law.

Let me explain some family background. My father had had two daughters with a previous wife to my mother. Their names were Rhona and Corinne and when they were alive they both lived in South Devon. In the years that followed my father’s death in December, 1956, both Rhona and Corinne, and their respective husbands, Reider and John, made me feel very special and very deeply loved by both of them. (Indeed, it was because of wanting to be close to Rhona and Corinne’s families that I settled in South Devon when I returned from Cyprus in 1991.)

Corinne died in June, 2013. John, who is now well into his 80s, lives in a small apartment in the village of South Brent just a few miles from Totnes in South Devon. I make a point of calling him from Oregon at least once a week but to be able to see John again after so many years was another big highlight of the vacation.

Inevitably, along came another lunch and in the photograph above you can see John on the right-hand side and sitting next to him, as in the left of the photo, is Greta, my cousin as in Rhona’s daughter, who spends a great deal of her spare time looking after John. Dear Greta!

carried on sharing many special memories.

Indeed, one of those special memories was Benji the wonderful dog that Corinne and John had for many years. On one of John’s walls was this wonderful painting of Benji.

The other fact about John is his incredible use of the English language. Both in terms of his vocabulary and his diction. John’s legacy to me is, and will be for the rest of my days, the value of speaking well.

Another wonderful connection with past times. 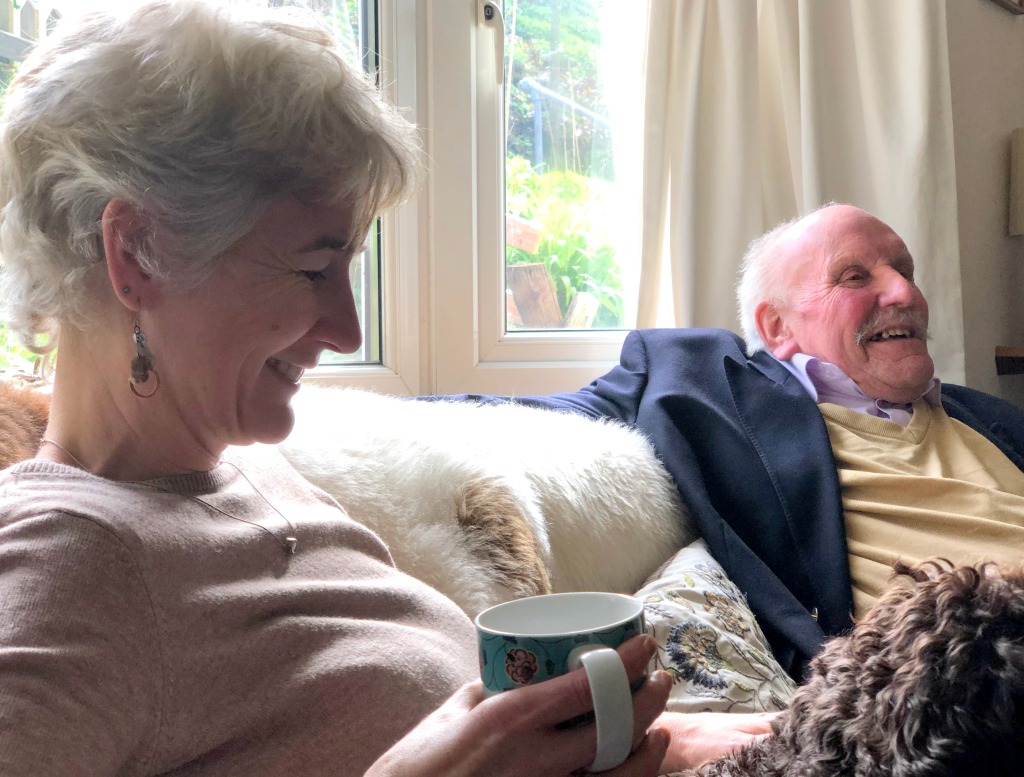 The truth is that the odds are that I may never see John again. That made this day with John so incredibly special. Huge thanks to Alex and Greta. What a fabulous day!

The next day, Tuesday, the 17th, was Lisa’s birthday and yet another wonderful evening out.

Then came the 18th and the last few hours of being with Alex. At 12:50 that day we were due to fly from Bristol down to Nice in Southern France to spend six nights with Reggie, Jean’s brother.

Those beautiful days will be the topic of tomorrow’s post. See you then!

But before I turn away from today’s description of our days in England, let me address a question that John Zande raised yesterday. Namely: “Have to ask, do you miss the English village life? It’s so beautiful.”

John, yes there was no question that there were stirrings of great familiarity when down with John near Totnes. In my mind’s eye, I could still walk up Totnes High Street and name many of the stores that I used to visit on an almost weekly basis when living in Harberton.

But at the same time I was shocked and disappointed by the huge growth in new housing, someone said an additional 500 homes built in the area in the last 5 years, and all the traffic and crowded lanes that go with that expansion. Many of the lanes were so crowded with parked cars that they were effectively single-lane carriageways.

The relatively sparse housing in the part of Oregon where we now live, the way that the natural world seems untouched by us humans here on Hugo Road, felt very beautiful in comparison. We looked forward to being back in Merlin.

What even a lovely boy, just one year old, can offer the world.

I’m writing this around 5pm UK time on the 8th June.  A little over 4 hours ago, at 1230 give or take, I witnessed a tiny event, something that for many of us wouldn’t have been seen as anything but trivial, albeit lovely.

I had been to an introductory meeting with Richard White of The Accidental Salesman fame.  We met in Pall Mall, just by Trafalgar Square, at the offices of The Institute of Directors.

Shortly before 1230, after Richard and I had said our goodbyes, I jumped on a Bakerloo train at the London Underground station at Piccadilly Circus heading north for Baker Street.

I think it was one stop later that into my carriage entered parents with their small son.  They sat down and the father, who had been carrying the young lad, was clearly beautifully bonded (not my favourite word, can’t think of a better one just now) with the small boy.  The love and joy of the parents and their child just poured out into the ‘ether’ of the carriage. Result?

One man, middle-aged, sitting opposite to one side of the family beamed smiles in the direction of the young boy.  You could sense that his emotional outlook had been transformed by the unencumbered joy flowing across the carriage.  He really smiled more or less non-stop until I and this family got off at Baker Street station.

Another man, my guess upper middle-aged, was formally dressed in the business suit, tie and polished black shoes.  He was reading a newspaper.  But the boy’s joyful infectiousness touched him.  He put the paper to one side and discretely looked across at the child bouncing on his father’s lap and a private smile crossed his face.

I was standing observing all of this and, of course, seeing the truth of something so core to the needs of humans.  That is, the power of living beautifully in the present and how it demonstrates what my colleague Jon Lavin so often says, “The world reflects back what we think about most”.

Why do I write ‘of course’?  Because what was so natural for this boy at the tender age of one is so natural for dogs throughout all their lives; wonderfully enjoying the present.

In a most un-English manner, I briefly caught up with the parents and established that the young boy’s name was Thomas.

Well done, Thomas, and may that joy in you be with you and all those around you for ever and ever.