Too obvious an idea!

It was all Jean’s fault!  In that the other day I was talking to her about ideas for posts for Learning from Dogs and Jean suggested a series featuring each of the nine dogs that we have here in Oregon.  Considering that this blog is called what it is, for that idea to surface some 2,000 posts and over 4 years after the blog first started says something about yours truly that I’d rather not pursue!

Here are a couple of photographs taken of Paloma just two days ago. 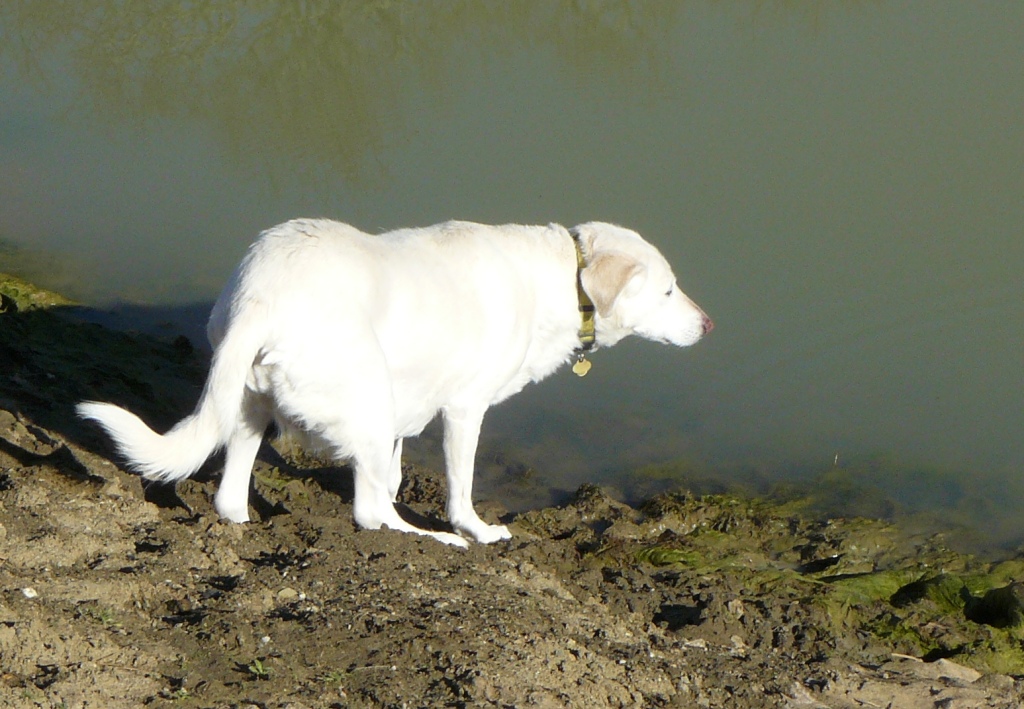 Now, as it happens, some time ago there was a post about Paloma published here. Here it is republished some two years later.

Before I met Jean in December 2007, she had been rescuing feral dogs in the Mexican beach town of San Carlos for many, many years. Over those years, Jean must have rescued and found homes for 60 dogs or more.  In the month that I met Jean, she had 12 dogs and 6 cats at her home.  Ten months later, September 2008, I flew out to be permanently with Jean with my German Shepherd, Pharaoh – that’s him on the home page of Learning from Dogs – taking the total up to 13 dogs.

When we moved up to Payson, Arizona in February, 2010 we brought all 13 dogs and 6 cats with us, much to the amazement of the US Immigration officers at the US-Mexican border town of Nogales!  Indeed, our particular officer left his booth excitedly to explain to his colleagues that our dogs and cats represented a border crossing record!

The old white dog padded down the dusty pavement. Sway-backed and dull-eyed, her teats, heavy with milk, grazed the ground. An anonymous creature in a cruel world. The pavement sizzled in the afternoon Mexican summer sun blistering her tired feet, but she could not hurry. She had to conserve her energy. Her pups were soon coming and finding a safe place to give birth to them was her priority. The beach that had been her home was not a good place. .. needed cool shelter. She would find it.

She was alone among a sea of human legs in this scruffy Mexican beach town. No-one noticed her plight. No-one cared. She was used to it. She had long been adept at finding dried fish, discarded tortillas, sometimes a tasty morsel thrown by a tourist sunning in front of the big hotel.

This would be her eighth litter and she was very tired. As a puppy she belonged to a family with small children. There were plenty of leftovers. But when she became pregnant they drove her to the beach, threw her out and left her to fend for herself.

Her babies were always beautiful. She had Labrador in her genes donating a coat that was pure white. Humans always took her pups; she could only ever hope their fate was always a better one than hers.

Anonymity. She had perfected the art; never make eye contact, move low to the ground, escape the stray kick with a quick sideways leap.

She remembered at the very end of the long beach there was a house with a pool. Plenty of water. Onward she padded.

The lawn surrounding the pool was moist with sprinklers and the hibiscus hedge close to the house made a safe nest. Soon she had dug into the damp earth a big enough hole to curl into; it was cool under the canopy of red flowers.

A human voiced shouted, “Carlos, get that dog out of the hedge.” Then the long hose filling that tempting pool was turned on her and a burst of water hit her in the face. She uttered a low growl. Carlos, the gardener, backed away, “Señor, the dog, she is having babies.”

The owner of the house turned abruptly and went inside. He picked up his phone, made a call to the local English lady who over the years had acquired the nickname ‘Dog Lady’. He practically shouted down the phone, “I have a dog in my hedge having pups. You had better do something about it or I shall dispose of them, and I won’t be pretty about it!”

‘Dog Lady’ was used to this. Had been many years since she took on the practically impossible task of rescuing Mexican feral dogs and she was well-known for never turning a dog away. In less than 15 minutes, she had walked to the fine house overlooking the beach and quietly looked under the hedge. As anticipated, the dog was incapable of being moved, her focus entirely now on the safe birth of her pups. With appropriate feminine wiles, the white dog’s human saviour persuaded the disgruntled owner to allow the mother dog a stay of a few days. ‘Dog Lady’ promised that she would take them away as soon as possible.

“She’s a mean and wild dog, you’ll never tame her,” came the angry response from the house owner.

But every day she took food to the white dog then sat quietly close by on the grass reading her book. The white dog had just the one pup, which ‘Dog Lady’ called Solovino, the Spanish for ‘comes alone’. The mother dog she called Paloma, Spanish for ‘Dove’. Many white dogs in Mexico were called Paloma and maybe years earlier that was what the children named her as the name did seem to resonate with this gentle dog.

Patiently, ‘Dog Lady’ moved closer and closer until Paloma would take meat from her hand, rapidly followed by allowing her ears to be caressed. Ten days later, while Paloma was eating, ‘Dog Lady’ picked up the little Solovino and put him into her car. Paloma’s response was immediate; she frantically ran to her child, her mothering instinct so great that she leapt without hesitation into this strange vehicle. Paloma and Solovino were safe.

The house owner graciously admitted that he had been taught a lesson in empathy and how sorry he was for being so rude and cruel.

Back at ‘Dog Lady’s’ home, a quiet sanctuary for so many dogs over the past years, Paloma and Solovino were quickly settled into a cool room. Paloma soon utterly trusted her ‘Dog Lady’ human companion and became the tame and loving dog she always wanted to be. Her shining eyes embraced her new world and she even regained her figure! Solovino grew quickly and found a wonderful family home in Tucson, Arizona.

Now some 6 years after ‘Dog Lady’ rescued Paloma from under that hedge, she is a beloved part of the Handover family. Indeed, she travelled in peace in February 2009 with her twelve dog friends from her sanctuary in San Carlos, Mexico to this dog paradise in the Arizonan forest just outside Payson.

Now here we are in Southern Oregon some two years after that story was first published.  Paloma happy and contented.

So many of the dogs that have passed through Jean’s loving arms have stories to tell.  Next up will be the story of Lilly.