S. Korea is the only country in the world with large-scale, commercial dog meat farms.

Frankly, I wasn’t planning to publish a post today. But then in came an email from John Zande, he of the blog The Superstitious Naked Ape, and this is what I read: “Paul, hi… Really good news. The following email links to a petition supporting a bill that will end the dog meat trade in Korea. I know you’ll want to sign it. Share it around, too.”

John then linked to a petition over on the Lady Freethinkers blog.

Jean and I have signed the petition and now I am republishing in full what you can read if you go across to that petition page. 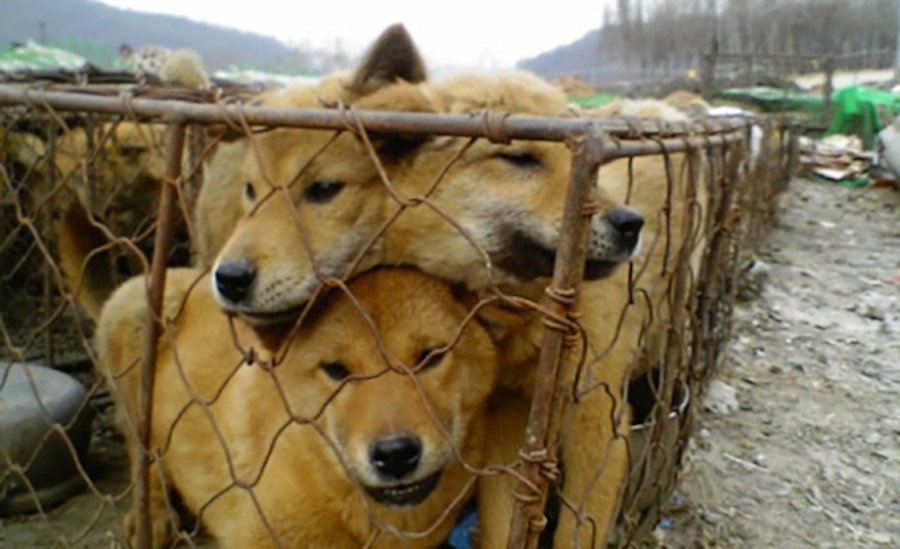 S. Korea is the only country in the world with large-scale, commercial dog meat farms. The animals live in disease and filth, and at slaughter are often savagely beaten just because people believe torture makes the meat taste better.

But a new bill could finally stop the cruelty. Rep. Lee Sang-don of the Bareunmirae Party has proposed legislation to exclude dogs from the Livestock Industry Act, effectively prohibiting dog farming.

The bill comes just before summer, a season of terror for dogs in South Korea — and we must speak out to help this lifesaving legislation succeed.

This time of year brings the gruesome Bok Nal Dog Eating Days, when millions of dogs are strung up, hung by the neck in a slow, painful death, and butchered for meat.

During Bok Nal — which occurs over three days believed to be the hottest of the season — more dogs are killed and eaten in the country than during the entire rest of the year, usually in the form of boshintang, or dog meat soup.

The dog meat is wrongly thought to have a “cooling effect” — even though in other parts of Asia, it is believed to have the opposite effect, and is eaten in winter instead.

S. Korea’s current leader, President Moon Jae-In, has compassion for animals and has even adopted a dog rescued from the meat trade, named Tory. Furthermore, activists throughout S. Korea are calling for an end to dog and cat meat, which is not only horrifically cruel, but tarnishes their international reputation. Most S. Koreans are against dog meat, and want the cruelty to end.

Sign this petition to urge S. Korean Ambassador Joe Yoon Je and President Moon to show the world they are a great and compassionate nation, and work to pass this bill and end all dog and cat meat in the nation.

I should add the closing part of that email that John sent to me.

There is simply no reason for this horrific industry to go on. Be part of our voice to DEFEAT DOG MEAT.

Thank you for doing your part to help stop animal cruelty.

Lady Freethinker is a registered 501(c)(3) nonprofit media organization dedicated to creating a free and compassionate world for all species. Your donation is tax deductible to the fullest extent allowed by law.

Only right that we save dogs as well.

As seen on the Lady Freethinker’s site.

Six days after Mexico City was ravaged by an earthquake, there seemed little hope of finding anyone alive among the rubble.

But a Japanese rescue team was thrilled to find one more tiny survivor — a schnauzer, who they managed to pull from the ruins of a collapsed apartment building.

The lucky dog was checked out by vets, and had somehow managed to remain in good health. Authorities now hope to reunite the schnauzer with her family as soon as possible.

Thank you to rescuers who travelled from around the world to save lives — both human and animal — in the wake of this tragic disaster.

The video and news item was carried by the New York Post and for reasons I am unsure about I couldn’t include the video in this post. But you can view that video by going here. Luckily other newspapers carried the wonderful event and the following photograph appeared in The Independent newspaper two days ago.

My guess is that dogs and humans have been saving each other for thousands of years and long may it continue.