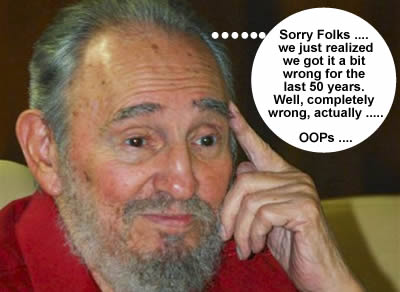 Humans are often both so funny and tragic at the same time  that one does not know whether to laugh or cry on hearing a particular news item. Thus it was for me when reading about Cuba’s apparent ideological U-turn.

The Cuban dogma of the last 50 years has been “State good; private bad.” This is familiar “Communist” territory, so Cubans have been born, grown up and died while being told that “capitalism” was evil, private ownership was bad and that the state was best suited to running everything.

This then was “the truth” for 50 years. But suddenly, amazingly, it seems that this was NOT the truth after all, since now entrepreneurship is to be encouraged in a bid to breathe life into the dinosauric Cuban economy. So, for 50 years Cuba was living a lie? And if so, will those responsible take the blame for these lies?

Errrrmmmm … the heirs and cronies of the apparent lie of over 50 years are the very same people (apart from the conveniently-sidelined Fidel himself, who can of course take the blame whether explicitly or implicitly) who are now proclaiming a new “truth”. So are they admitting their lie, or to be charitable – since XMAS is approaching – their total wrongness?

This is of course the big problem for those enforcing dogma. If there comes a time when the dogma is so manifestly absurd that it has to be changed then the long-time enforcers of the ridiculous are clearly seen to have been wrong for as long as the dogma has been enforced. And of course, the LONGER the dogma has gone on the MORE wrong the enforcers of same are seen to be. So for the dogma-enforcers there is every incentive to NEVER admit the nonsensicality of the dogma, whatever the evidence. Hence the ossification of dogma, when in the end enforcing the dogma is seen as more important than the actual dogma itself.

This is also one reason for the extraordinary conservatism that Humans are often “guilty” of. “Why do we do it that way?” -> “Errrmmmm … we’ve ALWAYS done it that way …”

Well, some credit has to go to the Cuban regime for admitting – tacitly or otherwise – that the last 50 years’ dogma was wrong. Kind as I am,  I do not use the word “idiotic”, though some would say that would be more appropriate …… Kind? Am I too kind in giving them any credit at all? After all, in a dictatorship, the only true definition of “truth” is “that which the leadership says is true.”

I haven’t worked out yet whether they are using the common ploy of dogma-changers, the only one in fact that gets them off the hook. This is to say: “Yes, we’ve always believed A was good and B was evil and now we believe the opposite. This is because CIRCUMSTANCES HAVE CHANGED.” Has anyone worked that out yet? The problem with the “Circumstances have changed” argument is of course that circumstances are ALWAYS changing and so dogma PER SE would seem to be a ludicrous way to manage our lives.

Well whatever, the latest pronouncements could have been made by the British centre-right Coalition Party rather than the old-style Cuban Communist Party:

“Our state cannot and should not continue maintaining companies, productive entities, services and budgeted sectors with bloated payrolls [and] losses that hurt the economy,” said the official Cuban labour federation, which announced the news.

George Osbourne, rightist British Chancellor of the Exchequer, would have been quite proud of that newsbite.

One has to wonder how this redefining of “the truth” will go down with the Cuban people. As has been argued, the main problem with changing the dogma is that you have to admit being wrong before, and often massively and for many years. And the longer-term ticking time-bomb is that once you allow questioning of the dogma then you open a door to the questioning of everything. This is why people who enforce dogma don’t really like any sort of questioning whatsoever. Encouraging it is like opening Pandora’s box; where will it all end? And the most hideous question of all of course is: “Don’t we deserve more say in our own government.” or – in the case of a “world-religion”, “Is the whole basis of our “beliefs” (for which we are prepared to kill people for) plain WRONG? Have we been living a LIE for over 1500 years? ” This question is a terrible one for individuals to face, so terrible that their leaders will do ANYTHING to prevent them ever facing it, including of course kill them if the questioning becomes too loud.

This is the real reason why dictatorships don’t like questioning of any kind; mindless sheep would be their preferred populace. A populace that asks too many questions is – frankly – to be avoided like the plague. They are currently plagued in Iran by sheep with very much a mind of their own, which is why oppression is great and increasing of course.

Anyway, I for one rejoice at the Cuban change of direction, even though one has often seen leaders tempted to open Pandora’s box only to violently slam it shut again when they see what starts to happen.

I always admired the Cuban revolution; chucking out a nauseating “Capitalist” mafiosi-style American-backed regime. The problem has been the extreme ossification of Cuban political and economic thought and development since the day Castro took over. Are better days ahead and will Cuba one day end up as a role-model for South America, much as Scandinavia is for the world in general?

The comic in all this? Listening to previous apologists for the former “lie” having to find linguistic justifications for their previous wrongness. This is marvellous for lovers of language as the arts of spin are brought fully into play justifying the previously unjustifiable.

The tragic? Knowing that the livers of the previous lie suffered both from living a lie and from the practical consequences of it, in Cuba’s case a quite unnecessarily high level of poverty in many areas even if there were some compensating factors. As Cuban apologists often say (said?) “The people may be poor but they are happy.” We might say (I assume): “Better to be much better-off and also happy ….”

PS Is the Pope watching all this (and the Islamic hierarchy come to that?) There is plenty of room for dogma change in the Vatican and Mecca …..

I was recently asked this question:

“If you don’t believe in God, why will you be celebrating the birth of his son on 25th December?”

This was my answer:

Christmas was, I believe, celebrated long before Christ appeared. But quite apart from that, the story of Christ is totally and absolutely wonderful and inspirational. He is a sublime role model. He encapsulates all that is most pure and admirable about the human spirit.

He understood our frailty and did not condemn us for it but tried to show us a better way through his own example. He shied not from difficult questions, but always spoke what I take to be “the truth”, and he taught it with astonishing examples, in particular through his own actions and relations with others, friends or strangers.

He was not greedy or selfish in any way; he truly loved people and treated them all as his beloved brothers.

Personally, I love Jesus and I am more than happy to celebrate his life, to remember how remarkable he was, to get once more inspiration from his selflessness, purity and love for his fellow men. I celebrate his life also for his ability to inspire others to to write such wonderful stories, even if all are not totally true (who knows?).

Sadly, it’s just the extra-terrestrial bit that is a problem. But I can celebrate his life without that, can’t I?

I wish there were a God, that he’d sort the mess out, that he’d end our pain, that he’d speak to me. I wish this quite deeply. But that doesn’t mean I should invent him if he isn’t there, does it?

What IS completely clear to me is that if we could all follow Jesus’ example, (which can be summed up in the sublime message “Love thy neighbour as thyself.”) then we would indeed enjoy “Heaven on Earth”. That would be more than enough to be going on with ….

Does that answer your question?