Not that long ago, in came an email from Doug Goodman, an author, wanting to offer a guest post. Of course, I said ‘Yes’. This is a little bit about Doug.

Doug Goodman is the writer of the Zombie Dog Series, which was inspired by his time as a cadaver dog handler. The fourth book is Ghost Dog. For similar stories, you can follow him at his dog-owning, horror-writing, family life blog is dgoodman1.wordpress.com.

“They call me the Fireman, that’s my name. Making my rounds all over town, putting out all flames.” – George Strait 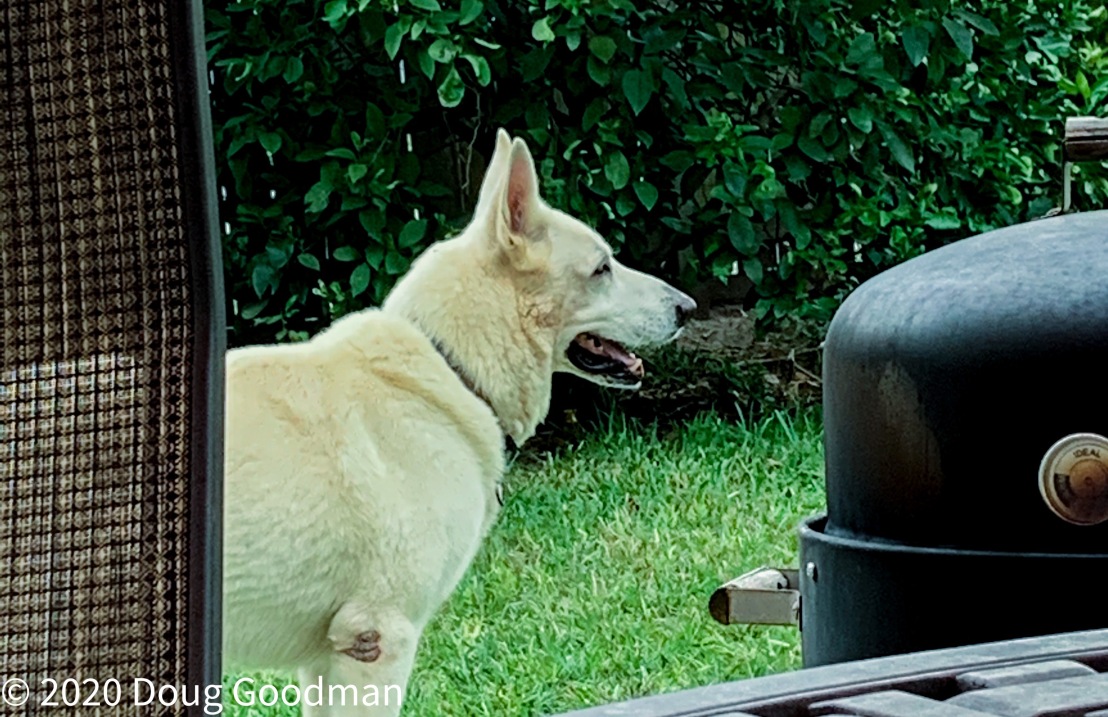 Most people don’t realize it, but I co-habitate with a Fire Marshall. He is the unauthorized, unknown Fire Marshall of Kemah Oaks. He seeks out all fires, whether they are barbecues or fire pits, and he tells people they should put out the flames. It’s hot! It’s dangerous! You could get hurt!

He doesn’t yell or shout, either. No, he isn’t the kind of fire marshall who is going to raise a ruckus about codes and dictates. He will walk around you back and forth and stare at you, and if that doesn’t work he will whine. The whine can be annoying, but it’s better than kicking the fire over or barking at you.

Yes, my fire marshall is Koda. All dogs have eccentricities. Some dogs don’t like the touch of grass on their paws. Mine doesn’t like fire in any sort. I’d say something bad happened with his previous owner, but my brother is his previous owner, and he never burned the dog.

Still, my fire marshal is willing to help out the neighborhood at any time, day or night. He has warned me about the dangers of every brisket I’ve ever smoked, even when it was pecan wood and he was slathering over it.

My wife’s fire pit is the worst. He HATES and FEARS the fire pit. I think it’s the open flame. Smoke is one thing, but those yellow and orange tongues are another. Last year I was able to buy birch wood. It smelled really good, and it made this beautiful crackling sound. I wanted to sit outside every night burning birch. Koda knew that was against code and fought me on it. Poor guy. His owner’s too dumb to know the danger of a fire. I’d remind him I once earned a Fireman Chit in Boy Scouts, but he can’t read printed language.

Today is no different. Our backyard neighbors are burning something. They don’t realize how lucky they are. The top photo shows him doing his duty, protecting them from the confines of our backyard. This one is even better:

You know he means business when he sits down. That’s not irony or sarcasm. Things get important to him when he sits.

I bet he’d love to go over and stare and whine at them until they put out their fire.

So if anybody needs me to bring Koda to their house to check on a fire, let me know. I won’t charge anything, but if you want to repay him, he really likes mint dog treats.

I have said it many times before and hopefully I will have the chance to say it many times in the future: Our dogs are the epitome of friendship, companionship and even unconditional love to us.

This wonderful story from Doug underlines the relationship that millions have with their dogs!