Fun days with my daughter’s family!

We had arrived in England, via Gatwick airport, yesterday, as in Monday the 9th April, and were staying with Maija and family until Friday when Jean and I travelled up to London to meet my sister Eleanor.

So these three days were to be spent doing as many fun things as we could; it being the Easter school holiday week so Morten was at home each day.

Thus today’s post is a fairly quick run through of all the things that we did.

First thing on Tuesday morning was to see how adept young Morten was in riding his bike.

Thankfully it was dry but still overcast. The forecast was for the weather to improve over the coming days. But whatever the weather we were not going to let it get in the way.

Maija mentioned that Wakehurst, part of Kew Royal Botanical Gardens was close by and we readily agreed to go there. As the Kew website explains:

Our wild botanic garden on the High Weald of West Sussex has over 500 acres of beautiful ornamental gardens, woodlands and a nature reserve. Wakehurst is also home to the Millennium Seed Bank, the largest wild seed conservation project in the world.

Morten got it into his head to ‘dress up’!

He is a very lively young man!

As well as the beautiful grounds it was possible to buy plants. 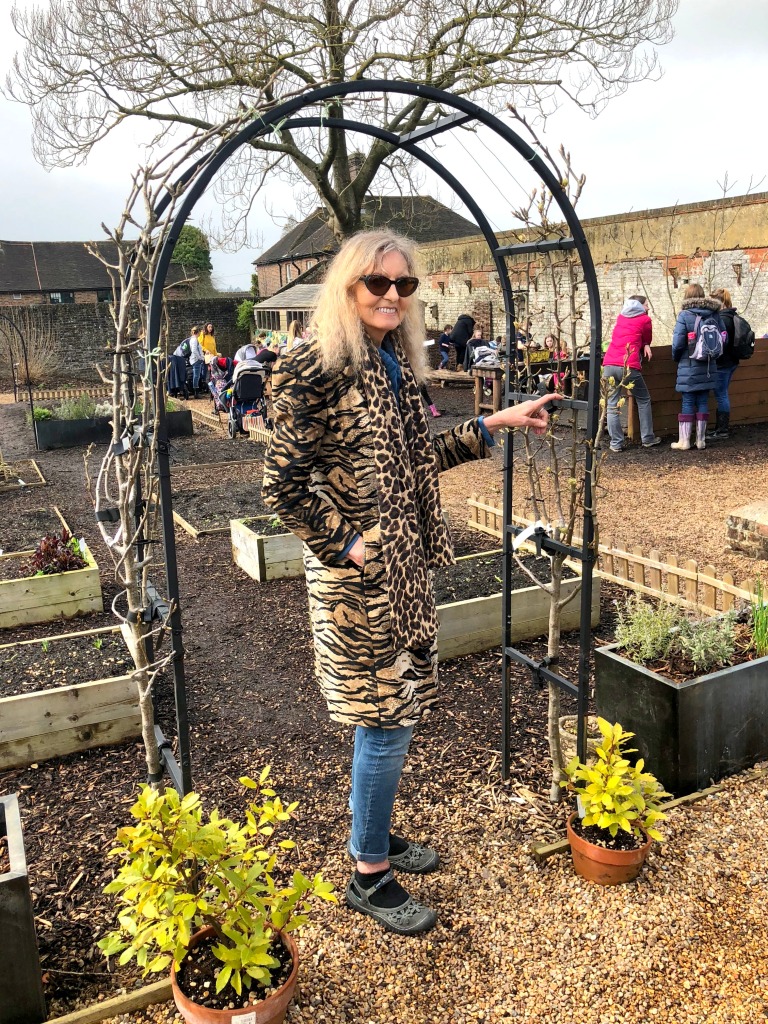 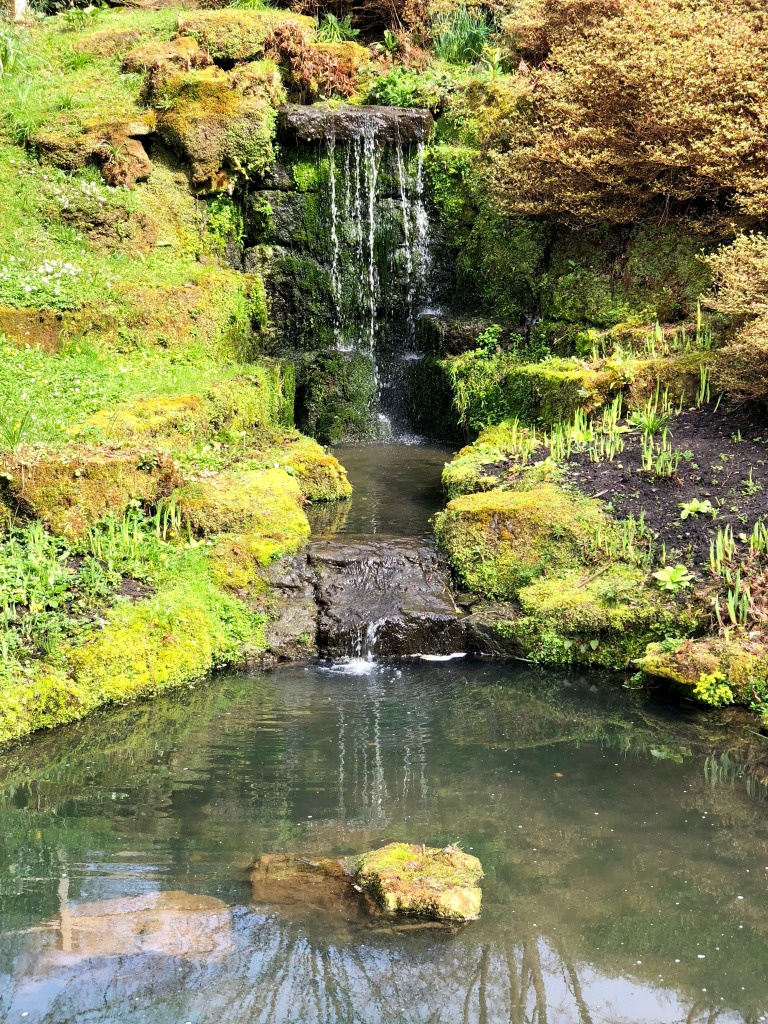 In the blink of an eye it was Wednesday and the plan that day was a visit to the Bluebell Railway. As the website offers:

The volunteer-run Bluebell Line was the UK’s first preserved standard gauge passenger railway, re-opening part of the Lewes to East Grinstead line of the old London Brighton & South Coast Railway in 1960. Since then it has developed into one of the largest tourist attractions in Sussex, yet it still remains true to its objectives of the preservation for posterity of a country branch line, its steam locomotives, coaches and goods stock, signalling systems, stations and operating practices.

One’s never too old to go on a steam railway!

As the above photograph shows it was another day of intermittent rain and low clouds.

But did that stop four people having a fun time???

On the Thursday, the 12th, Maija had an engagement in London in connection with her company, SOUND UK, and Jeannie and I were in charge of Morten for the day.

Well I think that was the arrangement although Morten woke up with very clear ideas as to how the day was to be spent. Primarily walking into Lindfield village so he could show Jean and me all the places of note!

Lindfield is the classic English village complete with cricket field, village pond and a pub or two. As Wikipedia offers:

The village stands on high ground above the upper reaches of the River Ouse. It is situated close to both the natural beauty of the High Weald and to Haywards Heath with its amenities and station on the main London-Brighton railway line.

Lindfield has a rich historic and architectural heritage. The ancient High Street, lined with lime trees, has over forty medieval and post medieval timber-framed houses, with many individual shops. At the bottom of the High Street is a natural spring-fed pond with fish, ducks, and herons. Beyond lies the Common which, over the centuries, has witnessed many events – fairs, festivals, bonfire celebrations and sporting activities; cricket has been played there since 1747. Today, it is still central to village celebrations and leisure activities. In addition to the Common there is Pickers’ Green, providing pitches for cricket, football, stoolball and a children’s play area.

The High Street follows an ancient north-south track that has existed for thousands of years, long before the Romans built a major road, the London to Brighton Way, a mile to the west of the village.

Lindfield first appeared as Lindefeldia, ‘open land with lime trees’, in a Saxon charter of 765 AD, in which King Ealdwulf granted lands for the building of a Minster church. When the Domesday Book was compiled the lands were held by the Archbishop of Canterbury.[4]

King Edward III recognised the importance of medieval Lindfield and in 1343 granted the town a royal charter to hold a market every Thursday and two annual eight-day fairs. For centuries the fairs continued each April and August with the summer fair becoming one of the largest sheep sales in Sussex.[5]

Lindfield was once part of the thriving Wealden iron industry. As early as 1539, William Levett of Buxted, a county curate with a thriving sideline in iron and armaments, was recorded as extracting iron ore at Lindfield. Later the Henslowe family of Lindfield were actively engaged in the iron milling business in association with Ralph Hogge, parson Levett’s former servant and later a major ironmaster in his own right.

In 1841 the London-Brighton railway opened, passing to the west of the parish with a ‘Station for Cuckfield and Lindfield Towns’ on open land that was to become the town of Haywards Heath. The construction of the Ouse Valley branch line reached Lindfield in 1866 with a proposed station to the north of All Saints’ Church but the line was abandoned for financial reasons.

Charles Eamer Kempe, a leading church stained glass designer and manufacturer lived at Lindfield until his death in 1907. Kempe renovated and redecorated an Elizabethan manor house near the village which he renamed Old Place,[6] from where he entertained clients and professional partners. Internally the house was appointed to the highest standard of Victorian splendour. After his death in the 1930s, the house was partitioned into six individual residences, with the main reception rooms forming part of the new “East Wing”.[7]

Lindfield also had a children’s play area which is where I snapped this photograph of Morten on that Thursday. 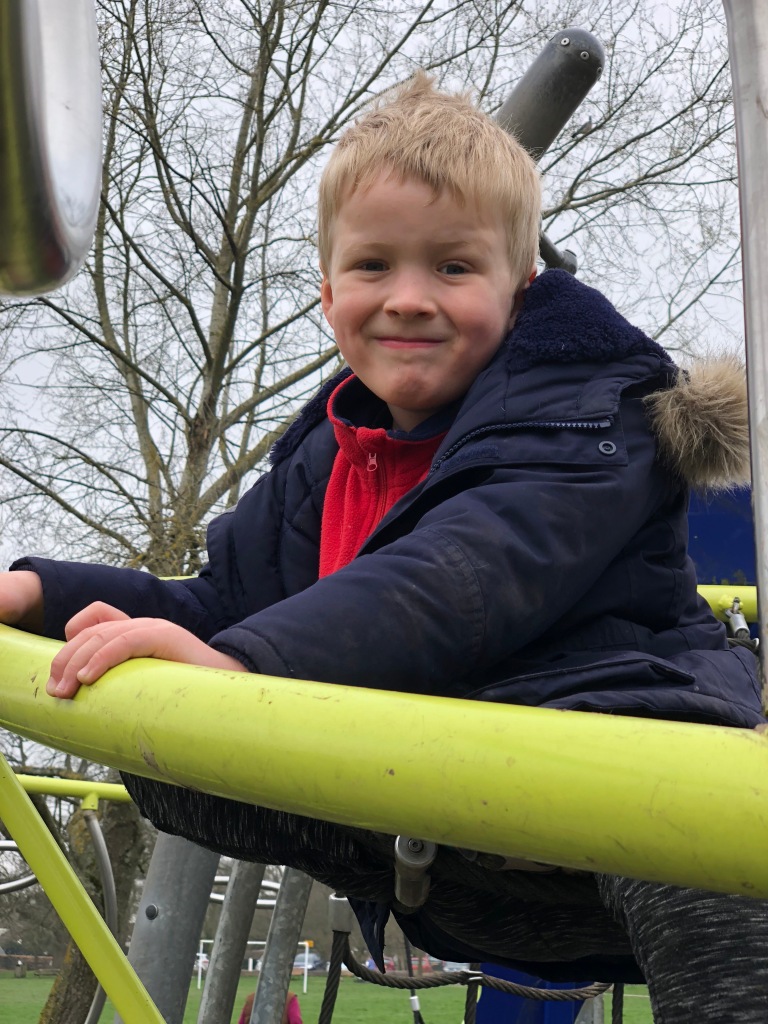 Then before we knew it the morning of Friday, 13th was upon us and it was time to catch the train up to London.

However these days with Morten had put in place a precious bond that was one of the primary reasons for us coming to England.

In tomorrow’s post I offer the experiences of meeting Eleanor, Richard and my son Alex.

13 thoughts on “To England and France, Part Two.”